Chilling Adventures of Sabrina is conjuring up a new role for a Buffy and Angel alum: Alexis Denisof has joined the cast of Netflix’s bewitching drama for Season 2, TVLine has learned.

Denisof will recur as Ms. Wardwell’s boyfriend Adam Masters, who “returns to Greendale after a stint overseas working with Physicians Without Frontiers — unaware that his fiancée has been taken over by the demoness Madam Satan,” per the streamer. The actor played Wesley on Buffy the Vampire Slayer‘s third season, then took the character to spinoff Angel for all five seasons. (He’s also married to Buffy star Alyson Hannigan.) His other TV credits include Finding Carter, Grimm, Dollhouse and How I Met Your Mother.

Also joining Sabrina‘s Season 2 cast as a recurring guest star: Jedidiah Goodacre (The Originals, The 100), who’ll play warlock Dorian Gray. “The owner of Dorian’s Gray Room, an exclusive nightclub,” the streamer teases, “this enigmatic gentleman of an indeterminate age is very good at keeping secrets, especially his own — a cursed portrait he hides from prying eyes.” 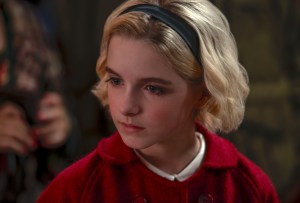 Plus, The Haunting of Hill House‘s Mckenna Grace will play a young Sabrina Spellman (seen at right) in the show’s upcoming one-off holiday episode, hitting Netflix on Friday, Dec. 14. “While The Church of Night celebrates the Solstice,” according to the official description, “that doesn’t stop Li’l Sabrina from asking Santa for something special.” Grace has also had roles on Once Upon a Time, Fuller House and Designated Survivor.