This week on The Good Doctor, Andrews reaches a decision about the chief of surgery position, while Shaun takes up an important skill in an effort to help Dr. Glassman.

Let us begin with Andrews: Allegra comes to the recently installed president and tells him it is time to make a choice regarding his surgical department successor. All season long, we’ve been told it’ll either be Melendez or Lim, which makes his final decision all the more surprising. In anticipation of Andrews’ announcement, Park starts a pool among the residents, who place bets on who they think will get the big promotion. Andrews, meanwhile, spends the days leading up to the big reveal shadowing both Melendez and Lim. He even manages to turn them against each other.

Andrews eventually gathers everyone in the department and reveals that, rather than appoint someone new, he has decided to stay on as chief of surgery. Oh, and Shaun wins the pool! Later that night, Melendez and Lim meet for drinks and agree that they have to stand together from here on out. They can’t let Andrews affect their working relationship. 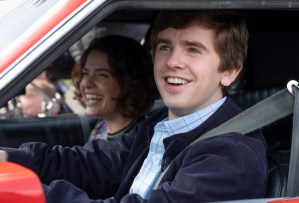 Meanwhile, Shaun insists that Glassman forfeit his driver’s license upon learning that his mentor’s cognitive functions have been impaired by his ongoing radiation treatment. But because he wants to be there for Glassman during his time of need, Shaun takes it upon himself to get a license of his own, and recruits Lea to give him lessons. Following an unfortunate incident at an intersection, Lea convinces Shaun to get back out on the road by explaining to her roommate that, like surgery, he has to be prepared for anything whilst driving. And so she takes him out for a second lesson, where he successfully makes a right turn at the intersection, but proceeds to hit a garbage can when a kid runs out in the middle of the street to retrieve his soccer ball. Lea ultimately convinces Shaun not to give up; if he can become a surgeon, one of the toughest jobs in the world, he can certainly handle driving. As the episode comes to a close, the roommates head to Glassman’s house so Shaun can drive him to his latest treatment. Glassman recognizes what Shaun has done for him and thanks his friend for the ride. 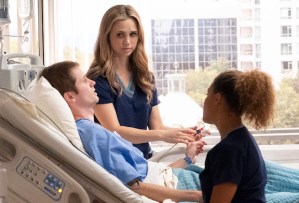 * Claire, Morgan and Melendez work on George Reynolds (Arrow‘s Tyler Ritter), a 28-year-old man with deviant sexual urges. He is brought to the ER for stroke-like symptoms, side effects of a medication he’s been taking to curb his desire to prey on children. He later checks himself out of the hospital, but returns after a failed attempt to castrate himself. The doctors wait until they have no choice but to proceed with castration, but are instead forced to repair his testicles after his circulatory and clotting systems begin shutting down in the OR. Claire tells him that they can proceed with castration once he is cleared by both a psychiatrist and urologist, but warns against further self-mutilation. Afterwards, George exits the hospital and, before Claire and Morgan can stop him, throws himself in front of a bus, which kills him instantly. Later in the cafeteria, Morgan brings Claire a tea and attempts to make sense of what happened. “This isn’t the way this should have ended,” she says, “but I’m not so sure the world is a worse place than it was a couple of hours ago.” 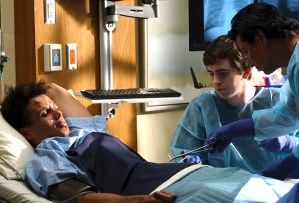 * Shaun and Park tend to Billy, who has been brought to San Jose St. Bonaventure to repair a collapsed lung and an orbital fracture suffered during a beatdown by some fellow juvenile delinquents. Billy has been picked on due to facial disfigurement — he has a large gash in his forehead where his father once hit him with a bat — and Park suggests they can repair the disfigurement while he’s admitted. Shaun insists it’s an unnecessary, cosmetic procedure, and is unable to empathize with the patient — or so he thinks. But it’s Shaun who ultimately comes up with a cost-effective solution during the orbital repair; inspired by a discussion between Lim and Park, Shaun figures out that they can insert a silicone implant above Billy’s eyebrow to fill in the dent in his forehead. The patient nearly dies on the table, but both the orbital repair and the cosmetic procedure are a success. Later, Billy thanks Shaun for saving his life, but Shaun thinks it’s his decision that nearly killed him. Park catches up to Shaun and reveals that Billy had been hoarding pain pills to sneak back into juvie, which he could have used to overdose. The way Park sees it, Shaun did in fact save Billy’s life.

What did you think of The Good Doctor Season 2, Episode 9? Hit the comments with your reactions!