Claire and Jamie are still deep in the hard, physical labor of homesteading in this week’s Outlander, so you’ll have to bear with them.

[Reads notes more closely.] Sorry, let me rephrase that. Claire and Jamie are still deep in the hard, physical labor of homesteading in this week’s Outlander, and THERE’S A BEAR WITH THEM.*

Woodland creatures aside, “Common Ground” is the perfect Thanksgiving-weekend episode, given that the Frasers unceremoniously boot some Native Americans from their land and then expect the tribe to live in harmony with them. Meanwhile, back in the 1970s, Brianna learns something huge and makes a decision that’s even huger.

Read on for the highlights of the hour.

*Many thanks to Olya Povlatsky, without whom this intro might never have happened

HIT THE ROAD | Jamie’s got his glasses on and his quill sharpened: That’s right, it’s deed-signing time! As he puts his not-yet-historically-significant-John Hancock on the dotted line, Gov. Tryon says Fraser’s choice to take him up on his offer of 10,000 acres of land is a “commendable decision on your part.” Tyron hands Jamie a map of his land and wonders where Claire will stay while her man is building their new abode; the governor is taken aback when Jamie says that Claire intends to help him with the work. “I assure you, sir, she has a great deal of fortitude,” Jamie says, making perhaps the understatement of the century. Tyron brings up the Regulators, aka the faction of residents who feel the Crown’s taxes are too high and unjust, but he seems convinced that he and Jamie are of the same mind on that issue. (Side note: I’m not sure they are.)

Downstairs at the inn, Claire is making preparations for their departure. Marsali is very pregnant, still rather morningsick and very teary as she talks about how she misses Laoghaire. “I ken you don’t care for her and there’s bad blood betwixt you, but with the bairn coming, I wish she was here with me,” the young woman cries. Claire is very comforting, reassuring her stepdaughter that she’ll be a great mother, and Marsali is grateful. It’s a sweet moment for two women who would’ve gladly shivved each other on the ship last season. (In case you were wondering, the plan is for Fergus and Marsali to stay in Wilmington until the baby is born, then they’ll eventually move out to Fraser’s Ridge.)

When she and Jamie are alone, Claire admits that the conversation with Marsali has stirred up thoughts of Brianna. “Sometimes, I worry that it was wrong to leave her,” Claire sniffs, thinking of all the grandchildren she won’t get to meet. But Jamie says that Bree will do what he did when Claire was gone: cling to memories. Though that doesna seem very comforting to me, Claire appears to take reassurance from it. Then she, Jamie and Young Ian pack their final belongings and take off for the wildnerness. 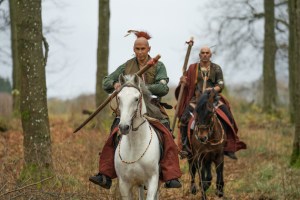 MEET THE NEIGHBORS | First order of business on the Ridge? Marking the property lines via flagged stake. The trio gets it done, though Jamie and Claire taking a microbreak to talk almost-dirty to each other. (Side note: When someone reciting the lyrics to “My Country ‘Tis of Thee” gets you hot and bothered, James Alexander Malcolm MacKenzie Fraser, you know it’s been a while.) Then Claire gives a zoology lesson about all of the animals in the woods that can kill them, and then Team Fraser sets about clearing its land.

Soon, though, they’re visited by some Native Americans that Ian identifies as Cherokee. Jamie makes a big show of dropping his knife into the ground to signify that he’s not looking to fight, and he holds his arms wide as he says, “I am James Fraser.” The Cherokee, looking unimpressed, turn and leave without saying anything.

So Claire, Jamie and Ian go back to their work. Jamie strings up an outline of their house, proudly showing Claire where he plans to build her a surgery. They are very smiley and touchy-feely; kudos to Caitriona Balfe and Sam Heughan for the subtle ways they communicate how the Frasers are able to relax a little for the first time all season.

But the good feelings end when the Cherokee ride up, this time visibly angry. They throw Jamie’s property markers down in disgust, and one rider speaks in his language, then they ride away. Jamie, Ian and Claire are unnerved.

BEAR DOWN! | The thing is, Claire and Jamie discuss that night before bed, they can’t really move — the Cherokee are likely to take offense at their presence anywhere up there — and Jamie is convinced of the “rightness of this place,” because the mountains spoke to him and told him so. (I swear, it comes off as way less crackpot-ty when said wistfully and with a brogue.) Claire suggests making a goodwill gesture, and everyone seems a little more settled until they all wake up in the middle of the night to find their meat stores gone and one of their horses clawed. “This isn’t the Cherokee,” Claire says. “This is a bear.”

When Jamie visits Myers the next day, he reckons that Camp Fraser had been visited by something the Cherokee call “Tskili Yona,” or an evil spirit in the form of a bear. Myers basically becomes Jamie’s protocol droid as he says he’ll bring some of Jocasta’s tobacco to the tribe on Jamie’s behalf, then gives Jamie a few Cherokee words to practice and advises him to cool it with the landscaping and such until things calm down. 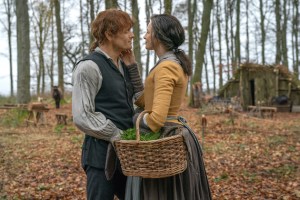 And things do seem quieter for a while. Ian is shocked to learn Claire can’t knit; Claire is shocked to learn that Jamie can. When they’re alone, Jamie and Claire both handle his rifle, and unfortunately, that isn’t a euphemism. All is well until Rollo hears a noise outside one night while they’re sleeping. (Side note: I love how Jamie is sleeping on his back like a vampire, which I think Claire notes at one or two points in the books? It was a teeny little touch that I appreciated.)

In two intercut scenes, we watch the Cherokee meet to smoke a pipe and dance while the Frasers realize that Myers has been mauled by the bear right outside their campsite. While Claire and Ian deal with the giant slashes through the man’s belly, Jamie grabs a torch and his gun and goes off to take down the animal by himself.

When he finally gets close enough to harm it, we learn that Tskili Yona isn’t a bear at all: It’s a man wearing a bearskin, and he’s got a huge knife. (Claire surmises the same when she notices a human bite mark on Myers’ neck.) Jamie and Bear Man wrestle, with the latter slicing Jamie’s arm in the process, but eventually Jamie ends the fight by pushing one of his property stakes through the man’s chest.

A bloody Jamie rigs up a travois, straps the wannabe furry onto it and then drags him to the Cherokee village. “You killed him?” one of the men asks in perfect English. (Ha!) “I did,” Jamie answers warily. Once it’s established that the dead man is Tskili Yona, the Cherokee put down their weapons, and Jamie visibly relaxes. Turns out, the guy was a member of the tribe who raped his woman the year before and subsequently was banished. When he realized he was dead to the tribe, he retreated deep into the forest. “His mind was lost forever. Took the form of a bear,” the English-speaking Cherokee man says.

Jamie asserts that he and his family want to live peacefully with their neighbors. He puts his hand on his bloody, lightly furred chest and says, “I give you my word.” 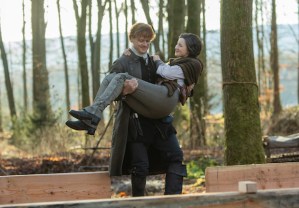 A PROPHECY | Despite having severe muscle damage, Myers is OK and able to sit up around the campfire with the Frasers, as he’s doing when a group of Cherokee approaches. The man who spoke English introduces the chief, who has come with them. “He prays that no more blood is spilled between us,” the man translates. “That is our wish, as well,” Jamie says. The tribe dubs Jamie “Bear Killer,” which impresses Young Ian, and then Jamie invites them to stay for a while.

While everyone’s settling, a woman named Giduhwa introduces her husband’s grandmother, Adawehi, to Claire. (Side note: If you’re an Oldlander, this character is basically Nayawenne.) We saw Adawehi earlier in the village; she’s a revered elder I the tribe. Giduhwa says Adawehi dreamed of Claire, and she tells her two things — one awesome, one troubling. First, the good: “You have medicine now, but you will have more when your hair is white like snow. You will have wisdom beyond time.” Now, the upsetting: “You must not be troubled. Death is sent from the gods. It will not be your fault.” (Fellow Oldlanders, let’s not spoil that for the rest of the class, OK?)

A while afterward, Jamie has the foundation of the house built, so he carries Claire over the threshold and then waxes romantic about how they’ll watch the sunrise from bed. “It’s perfect,” she says, and they kiss. 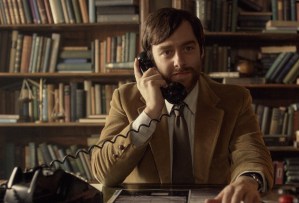 BREE GOES TRIPPING | In 1971, a forlorn Roger notices a mention of Fraser’s Ridge in the book that Brianna gave him at the Scottish festival. He contacts the author, who supplies him with copies of the documents she found — including Jamie’s land deed and a letter that references Claire — relating to that area of North Carolina. So Roger calls Bree with the good news that there’s proof her parents eventually found each other again.

“Roger, I cannot tell you what this means to me,” she says, overwhelmed. “Thank you for looking, despite everything that happened.” Though it’s clear they both want to say more, they eventually bid each other goodbye and that’s that.

Or is it? While back in Inverness to get the last of his things from the parsonage’s attic, Roger learns that 1) Fiona knows all about how Claire is a time-traveler (and she’s cool with it) and 2) her grandmother’s papers included a copy of an obituary, printed sometime in the 1770s, that says that Jamie and Claire died when their home caught fire. But the date is smudged, so she’s not sure of exactly when it happened.

“Brianna will be devastated. I can’t tell her,” Roger says. “This’ll just break her heart all over again.”

Maybe he changes his mind. Maybe he doesn’t. It doesn’t really matter, though: When Roger calls Bree in Boston, her roommate picks up and informs him that Bree has been gone for two weeks. “She went to Scotland,” the woman says, as Roger looks both agog and aghast. “To visit her mother.”