The title of This Is Us‘ Thanksgiving episode promises “Six Thanksgivings,” and you can bet your turkey feathers that the show delivers every single one of those feasts.

The Pearsons and their pals gather together to ask the Lord’s blessing in various timelines and locations, with varying degrees of joy. We meet Miguel’s grown-up kids (they’re a handful) and watch Randall’s campaign hit a serious wall. We see William meet someone special and Tess reach a huge milestone (and let us in on a little secret).

And finally, a long time ago in a war far, far away, we find out exactly how Jack got that necklace. 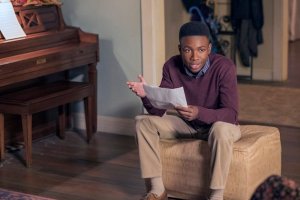 PEARSON FUN TIMES | The episode opens on a tight shot of Rebecca crying, but it turns out she’s just cutting onions for Thanksgiving dinner. Guys, the show is officially trolling us. When Jack enters the kitchen, we can judge from his goatee that we’re at the The Big 3 Are Teenagers and Things Are Gonna Get Really Bad Pretty Soon point in the timeline.

Rebecca notes that it’s the last Thanksgiving with the kids still living at the house, and maybe they made a mistake by skipping a giant, extended family soiree. “Aw, c’mon,” Jack reassures her. “Our families are horrible.” (Heh.) Plus: Miguel is coming over, because it’s his first Thanksgiving since he and Shelly divorced, and she’s got the kids for the day.

Mom and Dad Pearson are surprised to hear laughter coming from the living room, where their three moody teenagers are having a good time talking about Randall’s college application essay question. Or rather, Kate and Kevin are mocking their brother, and he doesn’t seem too wounded by it.

The question at hand: “What one person has had the greatest impact on your life?” K&K think his answer should be about the firefighter who brought him to the hospital the day he was born, and Jack agrees. But Randall’s going on about how the question is fundamentally flawed, and everyone’s laughing, when Miguel arrives. He’s arguing with Shelly on the phone, and it brings the room down fast.

EVERYONE LOVES A JACK PEP TALK! | Miguel has a tough time shaking off his holiday sads, culminating in the moment when he has to leave the room before he starts crying at the Pearsons’ dinner table. Jack finds his teary pal in the living room, where he’s having major guilt about not being a great dad. “We both know that I wasn’t there for Andy and Amber like I should have been,” Miguel laments. “Work always came first, and now I’m paying the price.”

Jack acknowledges that Miguel spent a little too much time at the office, but he also recalls the time Miguel learned how to play golf just so he could become a major player who could make business deals out on the green. And once Miguel’s feeling a little better, Jack advises him to keep trying with Amber and Andy: “You don’t want to be 65 years old and not know your grandkids.” 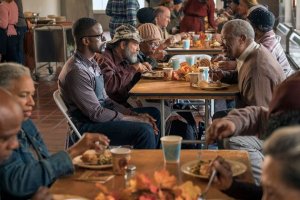 BETH V. JAE-WON, ROUND 1 | In the present day, Beth and Randall are discussing the soup kitchen his campaign is hosting that day and — hold up, Randall just walked out of the bathroom in only his boxer briefs, and I am going to need a minute.

Where were we? Oh right — she thinks Jae-won doesn’t like the fact that she’s working for the campaign, but Randall tells her she’s wrong. After all, he reminds her, she’s come up with a zillion good ideas in the few weeks she’s been on the payroll.

So the whole family (save Tess, who’s staying behind because she doesn’t feel well), drives two hours to Philadelphia, where Jae-won is quite miffed because Beth switched the location of the charity meal. Councilman Brown, he argues, is handing out turkeys at the largest soup kitchen in the district, which also happens to be the one that gets the most attention from the press.

“We don’t need a photo op. Randall needs to connect with the people,” Beth says, which is great and all, but one can do both — plus, a frustrated Jae-won points out, Randall needs votes. The candidate takes Jae-won aside and says that Beth is the campaign’s “field director,” then shuts down any further argument by saying, “That is my wife, and she’s for real. And it’s not open for discussion.” 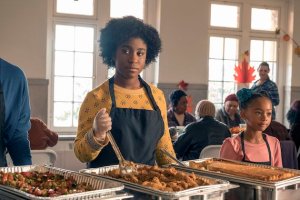 BETH V. JAE-WON, ROUND 2 | As Annie and Deja work the line, with Deja quietly remembering what it was like to be on the receiving end of that kind of charity, Randall visits with his potential constituents. It’s all going well until Jae-won announces that he’s called in a favor and convinced a photographer to come by for a few feel-good shots. Beth says no. Jae-won says it’s a mistake. Things get loud, quickly. (For the record, Jae-won was right.) “I don’t care if it’s a mistake. She’s my wife,” Randall says, and there’s an exasperated “What are ya gonna do?” tone to it that Beth picks up on. Meanwhile, Jae-won is DONE… maybe for good?

As they prepare to leave, Beth wonders how many of her campaign ideas were actually “stupendous,” as Randall declared before. And when he hesitates a little, she realizes that he’s just been trying to make her feel good because she got laid-off and needed a win. And that makes her feel worse.

Just then, Beth’s phone starts blowing up (the cell service at the soup kitchen was weak) and she says they’ve got to hurry home. 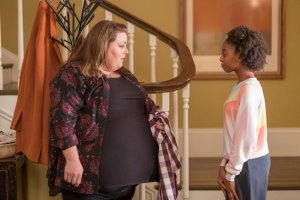 A BIG DAY FOR TESS | The reason for Beth’s haste? Tess has been calling and texting her all morning, because she got her period for the first time, and she’s freaked out about it. The girl is even more discomfited when Toby — who’s been cooking Thanksgiving dinner with Kate at Randall’s place while the family is in Philly — inadvertently sees his niece holding boxes of sanitary pads and tampons. (Side note: You’re a grown man, Toby. You can say the words. It’s OK.)

But Kate is the picture of serenity as she talks to her niece, reassuring her that it’s all good and she shouldn’t be embarrassed. Then she kvells a little bit about how Tess is growing up and how soon she’ll have her first boyfriend. “Or girlfriend,” Tess says a little shyly, later asking her aunt not to say anything about it to her folks.

HOW WILLIAM MET JESSE | Let’s take a minute to delve into the past again. This time, we see the moment that William meets his boyfriend, Jesse, at a Narcotics Anonymous meeting. They wind up having dinner together, and that’s when Jesse mentions that his marriage to a woman was “a complicated mismatch.” William invites the Brit to hear him and some other sober musicians play a Thanksgiving gathering; when Jesse arrives, William is a bit irked to see his guest speaking to a woman for much of the evening. “Relax, will you?” Jesse teases him at the end of the night. “She’s my cousin.” A relieved William merely answers, “I’m cool.”

MIGUEL STEPS UP | Back in the present, Miguel is preoccupied as he and Rebecca drive to Scarsdale, N.Y., to have Thanksgiving with his kids and their families. “I feel like a pity invite,” he confesses, but she says it’ll be great, and then they’ll meet up with everyone at Randall’s for dessert.

Rebecca is many things, but right all the time is not one of them. The meal is stilted at best and confrontational at worst; it’s clear that Miguel and his kids don’t have much knowledge of each other anymore, and his son is openly hostile to Rebecca after finding out that she included nuts in a side dish, unaware that Amber’s husband has an allergy. “First you steal my father from my mother, and now you’re trying to kill my brother-in-law,” he blurts out. “Sorry, too soon?”

By this point, Miguel has had enough. He points out that he tried very hard to keep his children in his life, “and I was lucky if I got an email back from you.” He points out that he and Rebecca didn’t reconnect until a decade after Jack died and Shelly remarried, so the vitriol directed at the new Mrs. Rivas is uncalled-for. “Take all the shots at me that you want to… but the one time a decade that you see Rebecca, you show my wife some respect,” he says.

Amber grabs her father’s hand. Andy looks properly chastised. And Rebecca, gracious as always, deftly bridges the awkward moment by asking for the score of the football game.

TOBY (ALMOST) RUINS THANKSGIVING! | At Randall’s, Toby somehow manages to ruin the entire meal — including the turkey — in the brief time Kate is upstairs. But she’s not bothered, because she handled the Tess situation like a pro, and she’s sure that they’re going to be great parents.

So after the Philly contingent returns and Rebecca and Miguel arrive, everyone sits down together to eat the Cracker Barrel delivery food (among other fast-food items) Toby has procured. Kevin and Zoe even FaceTime in from Vietnam. 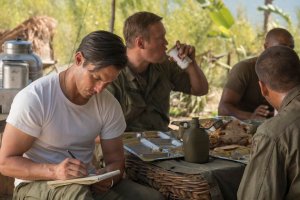 NO SUCH THING AS INNOCENT | The Vietnam storyline picks up with Nicky still hating Jack/Vietnam/the war/the world, and Jack confident that a little more time to work “that crap” out of his system is what his brother really needs. Nicky chooses to skip the unit’s Thanksgiving dinner; when the village woman wearing the necklace is trying to lug two heavy buckets, Jack steps away from the meal to help her, and one of his fellow soldiers snaps the picture that Kevin will cling to many years later.

Jack later brings the leftovers to the woman, her young son and a man who lives with them who I’m guessing is her brother. The son cut his foot on the camp’s barbed wire a while back, and he’s not doing well: The wound is infected, and despite a lot of yelling from the brother, Jack is determined to help the boy. So he pulls in Nicky, who’s a medic, and orders him to clean up the kid’s wound. Nicky refuses, saying the Vietnamese are the enemy. There’s a lot more yelling, and Nicky eventually bolts, but Jack manages to disinfect and wrap the cut and to give the boy some medicine for his fever.

That evening, Jack chides his brother that the only people in the village are “women, kids and old men.” Then Nicky tells a story about how his commanding officer, who was beloved by both his men and the villagers near their camp, was killed in his sleep when the Viet Cong tossed a bomb into his bunk — and the person who led the VC straight to the dead man was the seemingly kind old woman who cut his hair. “You can be nice to them all you want, Jack, but they’re not just women and children,” Nicky reminds his brother.

The little boy heals. His mother is grateful and thanks Jack by giving him her medallion, which he puts around his neck.