Need to catch up? Check out our previous The Flash recap here.

The Flash vibed to the North Pole this Tuesday for answers about Caitlin’s chilly alter ego, Killer Frost. At a black ops site way, way up north, Caitlin, Barry and Cisco find Dr. Thomas Snow (guest star Kyle Secor), alive and well. Caitlin is pretty surprised, given that her dad had severe ALS 20 years ago.

Thomas explains that he began experimenting with cryogenic therapies and even managed to freeze the progression of the disease. But the experiments became more and more dangerous, so he quarantined himself for the sake of everyone’s safety. Then the site was locked down while he was still inside. Caitlin immediately blames her mom, who is the only one with the authority to close the building. 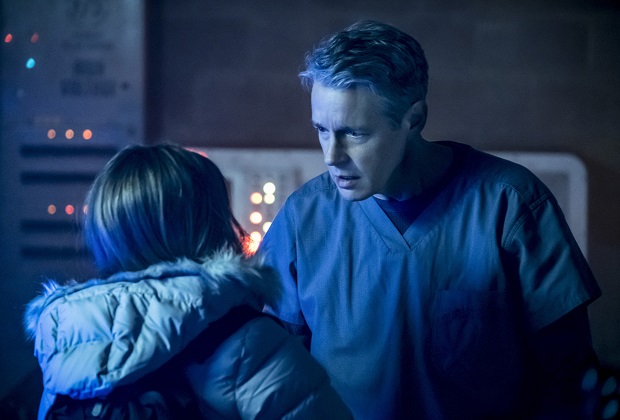 “We can get you out of here. We’re going to give you your life back,” Caitlin tells her dad, who is brought back to S.T.A.R. Labs by the trio. While the father and daughter are out for a walk and catching up, dad starts to crystallize, which is when Caitlin realizes his condition is sparked by anger or fear, much like her Killer Frost alter ego. Thomas then reveals that Caitlin also had the genetic marker for ALS, so he tried to prevent the disease in his daughter. Despite the use of an altered cure, Caitlin started to exhibit dual personalities. Thomas, however, claims that he never developed another personality.

Cisco, meanwhile, vibes back to the lab and returns convinced that Thomas is not really Caitlin’s father. Caitlin is furious with Cisco, but guess what? He’s right! Caitlin discovers that her dad is actually an icy baddie who’s trying to wipe out Thomas. He sent the message to come find him because he needed Caitlin’s cells for a serum that will suppress his human side.

While the others are too frozen to fight, Killer Frost comes out to confront Icicle, who tries to appeal to his “cool” daughter. “You’re not my family, they are,” Killer Frost replies, referring to her friends. “I’m strong because I have people in my life who actually care about me.”

Then she steps on the serum bottle. Icicle, however, manages to escape, not that the showdown isn’t without some wins for Caitlin. For one, she now knows that Killer Frost is still a part of her, and thanks to Harry’s mental activity dampener, Caitlin can easily hear her alter ego. Plus, Mama Snow, who was just trying to protect her daughter, isn’t looking so awful anymore.

Also of note in the episode:

* Name drops: Thomas says he was in touch with scientists Victor Fries — aka Mr. Freeze, whose wife Nora appears in the “Elseworlds” crossover — and Louise Lincoln, who was Killer Frost in the DC comics. Thomas also reveals that Harrison Wells gave him a video link to S.T.A.R. Labs.

* Nora is so impressed by her mother’s (crazy) dive off the rooftop last week that she wants to tag along while Iris does some detective work, and Iris could not be more thrilled. And Barry could not be happier for Iris. Awww.

* Cecile, FTW: “I literally saved the world between contractions and you don’t think I’m intimidating?!”

Flash fans, what did you think of “The Icicle Cometh”?