After “Who Are You Now?” gave us our first teensy taste of the Whisperers, Sunday’s episode of The Walking Dead — the last one before the midseason finale — dished out… Drat. Only another minuscule morsel. After the opening showed us Rosita running from what she thought were walkers speaking in hushed tones, that was about it for the show’s new Big Bads. So how was the rest of the hour filled, then? By catching us up with B players like Jesus, Tara and Aaron, feeding us backstory on the newbies and their ill-fated friend Bernie, and revealing how, ahem, doggedly Carol was willing to pursue Daryl to be Henry’s Hilltop babysitter. 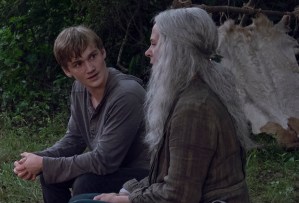 ‘YOU’VE BEEN OUT HERE LONGER THAN I THOUGHT YOU’D BE’ | Early on in “Stradivarius,” Carol and Henry arrived at Daryl’s very open-air camp and met his dog, whose name was apparently Dog. (Right on cue, I — and I suspect all the animal lovers in the audience — had a traumatic flashback to Shiva’s unhappy ending.) Carol wasted little time revealing to her BFF the reason for the drop-in: Henry was going to learn smithing at the Hilltop, and since she had to return to the Kingdom, she wanted Daryl to play Supernanny to the idealistic kid. How about it? “Nah,” grunted Daryl, “he’s gonna have to learn, just like you and I did.” Henry, for one, was all for that idea. He couldn’t believe that his mom thought he needed a chaperone. And even if he did, “this guy?”

Meanwhile, as Michonne, Siddiq and D.J. traveled with Magna, Yumiko, Kelly, Connie and Luke toward the Hilltop, Miko apologized to Alexandria’s security chief for Magna’s ‘tude. She’d been hard hit by the death of Bernie, whose awful paisley shirt she’d come to like as much as she had him. When the group arrived at what used to be the site of the newcomers’ camp and now looked like the aftermath of a rummage sale-turned-rave, Michonne revealed that she’d only tagged along to see if their story had checked out. Now, she’d head home, and if the newbs wanted Siddiq and D.J. to usher them the rest of the way to the Hilltop, they’d stop going on and on about how they wanted their weapons back. Ultimately, Magna was voted down: For a chance at a safe-ish place to live, the group could play by Michonne’s rules for a few hours more. 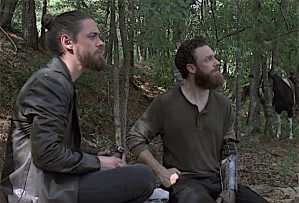 ‘YOU FIND A KAZOO, YOU GIVE IT TO A KID’ | When we cut to the Hilltop, it actually looked beyond safe-ish — it was thriving. In fact, its biggest issue seemed to be that, since Maggie had taken off with Hershel to work on a new community with Georgie, her replacement as leader — Jesus — had demonstrated a real aversion to leading. (We all know the type — loves to have opinions, hates to make decisions.) He even snuck away as often as possible to continue teaching martial arts to Aaron, now sporting a prosthetic arm. Wait, all these years later, and Aaron still wasn’t a ninja?!? And all these years later — even in the wake of “What Comes After” — Maggie and Michonne were still so at odds that, according to Aaron, the latter didn’t know that the former had skedaddled? While question after question occurred to me — did these two never start dating? Was this a date? — they spotted a flair fired by Rosita, learned that she’d stashed Eugene in a barn, and rushed her back to the Hilltop before nightfall.

Back at Chez Daryl, he cooked his signature dish (snake soup) for Carol and Henry, got a new haircut from his pal (that looked exactly like his old one) and explained why he couldn’t quit searching for Rick. “We never found a body — ever,” he noted. “After a while, it just got easier to stay out here.” Later, Daryl went in search of Dog, who worrisomely missed dinner, and Henry followed. Turned out, Dog had gotten stuck in one of Daryl’s traps and was at risk of becoming Walker Chow. By the hardest, Daryl saved his four-legged friend, Henry saved Daryl, Daryl saved Henry… and, in the end, we saw Carol, bow and arrow at the ready, watching from nearby — she’d clearly arranged this whole scenario to facilitate some babe/babysitter bonding. Before we move on, a little side note for Carol: You can burn up all the Saviors you like, but leave Dog alone, ya hear me? Thanks. 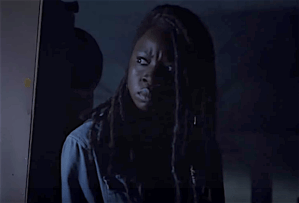 ‘THIS IS THE ONE THING THAT SEPARATES US FROM THE ANIMALS’ | Camped out overnight with Siddiq, D.J. and the newbies, Michonne heard a noise and, before Luke could reveal what he’d taken hold of, Ginsu’d the Stradivarius that gave the episode its title. Apparently, he’d always traveled with a collection of instruments — even super-fancy ones — because he believed that art was what had helped ancient man defeat the Neanderthals. He even came thisclose to quoting Madonna by saying, “Music makes the people come together.” Even after everything, Michonne asked, did he still think that was going to be all it took? Yes, he insisted. Ha — and Carol thinks Henry’s an idealist!

At the Hilltop, Jesus explained to Tara that he’d been with Aaron when they found Rosita because he’d been keeping the lines of communication with Alexandria open and hoping against hope that he could get them on board for the upcoming fair. Uh-huh, well, Hilltoppers have noticed his constant absences, she said. Uh-huh, well, maybe they shouldn’t have made him leader, he shot back. Agreed! Nonetheless, “your people are counting on you. Maggie is counting on you,” Tara argued. “I’m counting on you.” So when she set off to help search for Eugene in the morning, he’d have to stay behind and do his damn job for once. Meanwhile, at Daryl’s, Henry suggested to his host that Carol shouldn’t have to come looking for her buddy. So what, Daryl asked, did Henry really want him looking over his shoulder at the Hilltop? Carol’s request of Daryl, the kid intuited, “isn’t just about me.” 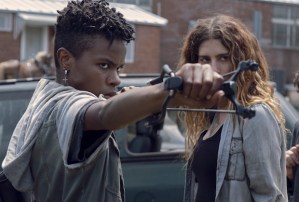 ‘IT’S NOT THAT SIMPLE’ | In the morning, Siddiq encouraged Michonne to come along the rest of the way to the Hilltop — especially after she murdered Luke’s violin. She needn’t worry about Maggie, he added. She was gone, and Jesus was in charge. Before Michonne could find out how he knew something like that, walkers approached, and at last, Yumiko, Magna & Co. were given back their weapons. And, with the exception of Luke, they turned out to be badass fighters. Particularly impressive were Kelly and Connie, who went all Bart Simpson on the zombies with their slingshots. But this was no mere battle scene. No sooner had Michonne deduced that this was the same herd that had trashed the site than we — and, more to the point, Magna — saw how she’d deduced it: There was a walkerfied Bernie, his innards spilling out all over his loud-as-hell shirt. As Magna’s heart broke anew, Michonne put Bernie down. Not a bad death, as far as deaths of characters we never met go.

Once the gang was back on the road, Siddiq told Michonne he’d have filled her in about Maggie sooner, but he’d promised someone he wouldn’t. At least now she could for sure come to the Hilltop, right? Pass, she said. “I kept my promise to Judith.” Siddiq had just begun protesting, asking what about her promise to Carl, when up rode… wait a minute, is that C. Thomas Howell?!? It was! Two rando Hilltoppers — one of whom was, I couldn’t make this up, C. Thomas Howell — rode up with a message: They had an injured Rosita. OK, said Michonne. Go deliver that message to Alexandria and let her people know they were on their way to the Hilltop. Before they set off again, Connie saw in the woods… nothing, she decided. Although the camera’s POV shot suggested that they were being observed, maybe by a Whisperer? A C. Thomas Howell fan? Who could say?

‘YOU’RE ADORABLE’ | As the episode drew to a close, Daryl — now fully committed to chaperoning Henry’s life — arrived with Dog, Carol and her son at the Hilltop. As if it wasn’t already obvious that Henry was supposed to be the new Carl, he wondered hopefully whether Carl’s old girlfriend Enid would recognize him now that he was older and bigger. And he didn’t want to hear from his mom that he was adorable. “No, I’m not,” he insisted. “Unless Enid likes adorable.” No sooner were Daryl and Aaron reunited than the latter revealed that a group was going out in search of Eugene — and could use a good tracker. “Of course,” said Daryl. He and Dog were ready to roll. Finally, Tara didn’t make Jesus plead his case for why he should accompany the search party instead of her. She just let him go and said she’d stay behind and keep the Hilltop going. Somebody had to!

So, what did you think of “Stradivarius”? Are the newcomers growing on you? Were you irritated that we didn’t get more of the Whisperers? Would no one have informed Michonne that Maggie had taken off? Hit the comments.