The mini-reunion took place during Carell’s monologue, when he took questions from the in-studio audience. The topic, naturally, turned to whether or not there will be a reboot of the popular NBC sitcom.

“I don’t think it’s the best idea,” Carell said, echoing a sentiment he voiced in October. “I think we should just leave it alone.”

Of course, that didn’t stop Kenan from asking the host a similar query, which Carell answered the same way. And then the Artist Formerly Known as Michael Scott heard from a few of his former employees. 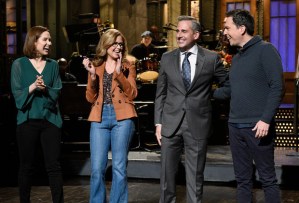 First up? Unbreakable Kimmy Schmidt‘s Ellie Kemper, who played The Office’s Erin for five seasons. “People would really love to see an Office reboot. Because I need that money. Let’s get that money, Steve,” she urged her former co-star.

Then Ed Helms, who played Andy “NardDog” Bernard for seven seasons, stood and pointed out that with the cash a potential reboot would bring in, “you wouldn’t have to do all those sad movies.” (Carell was hosting to promote the family drama Beautiful Boy.)

Finally, Splitting Up Together star Jenna Fischer, aka The Office OG Pam Beesley, called upon Carell to recall a touching moment from the episode when Michael leaves Dunder Mifflin behind for Denver.

(Technically, the bit included four former Office actors: Nancy Carell, wife of the host who appeared near the end of the monologue, also played The Office‘s Carol, the realtor who sold him his condo in Season 2.)

Press PLAY on the video above, then hit the comments with your thoughts on the Office mini-reunion!