We’ve seen plenty of prison breaks on TV and in movies over the years. (Heck, we even had a whole show called Prison Break… and it ran for five seasons!) So as yet another entry in a well-worn genre, Showtime’s true-crime limited series Escape at Dannemora — premiering this Sunday at 10/9c; I’ve seen six of the seven episodes — is brutally effective, but not especially groundbreaking. When it delves into the thickly tangled psyches of its characters, though, it rises to a higher level, thanks to excellent performances from its three lead actors — especially Patricia Arquette, who delivers fascinating, Emmy-caliber work here. 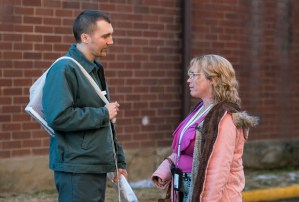 You may recall the real-life story that Dannemora is based on: the 2015 manhunt that ensued when two convicted murderers made a daring escape from an upstate New York prison. It grabbed headlines with its sordid details — the inmates were having sex with a woman who worked at the prison, and she helped them escape! — and with comedy star Ben Stiller on board to direct, you might expect him to take this story in a jokey, Coen Brothers-esque direction. But Stiller doesn’t poke fun at his characters; instead, he plays it straight with a melancholy, generously humane portrait of blue-collar life… and the lengths some will go to bust out of that life.

Stiller filmed Dannemora in the real-life New York town where the prison break took place, and the cast and crew even spent about a year there before filming began. All that time spent pays off: Dannemora feels lived-in, with a bone-deep understanding of the struggles the people who live there go through. In a bitterly cold town that feels lost in time and is the farthest thing from glamorous, it’s understandable that people might want to escape: not only inmates Matt (Benicio Del Toro) and Sweat (Paul Dano), but also prickly prison employee Tilly (Arquette), who’s fooling around with both of them as an act of rebellion against her own drab, disappointing life.

Matt and Sweat’s escape plot dutifully hits all the usual B-movie beats: the plan, the near-discovery by the guards, the discouraging setback and then, finally, the escape. It’s lean and mean, and helped along by Stiller’s energetic directorial choices, like an exhilarating nine-minute tracking shot that reveals the dizzying full length of the escape route. But it can’t help but feel a bit stale. I’d rather have spent that time learning more about Tilly, or the prisoners. The character work is so strong, everything else about Dannemora pales by comparison. 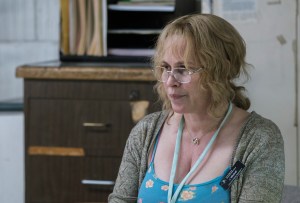 Both Del Toro and Dano do top-notch work here; Del Toro nimbly walks the line between charming and terrifying, and Dano plays against type with a tough-edged turn. But as good as they are, Arquette is the true standout here. She radically alters her appearance to play Tilly — no makeup, stringy blonde hair, her lips scrunched up in a permanent sneer — but it’s more than just a physical transformation. Tilly is pretty much a jerk, eternally irritated and constantly lying and whining, but Arquette also lets us see how she secretly just aches for a little attention and excitement. It’s a riveting performance, on par with anything I’ve seen on TV this year. (Tilly’s husband Lyle, though, is played a little too cartoonishly dopey, like he wandered over from Fargo.)

Like many limited series these days, Dannemora probably could stand to be shorter; it stalls out and loses momentum in the middle episodes before ramping back up for the final installments. But there’s a lot of rich psychological ground to cover here, and Stiller and his actors patiently sift through every bit of it. It’s interesting to compare this to another true-crime docudrama hitting TV screens soon: Bravo’s Dirty John, which has more than enough polish and glamour, but ends up being disappointingly hollow. Escape at Dannemora is more like a calloused pair of hands: maybe not the prettiest thing in the world to look at… but they get the job done.

THE TVLINE BOTTOM LINE: Escape at Dannemora rises above the typical prison-break story with humane characterization and excellent acting, especially from Patricia Arquette.