Let me make one thing clear to start: Connie Britton is a ray of TV sunshine. She makes good shows great (Friday Night Lights) and not-so-great shows actually pretty good (Nashville). But alas, even her radiant presence can’t salvage Bravo’s Dirty John (premiering Sunday, Nov. 25 at 10/9c), a true-crime drama that is truly a crime. Britton and her talented co-stars are wasted here on a warmed-over Lifetime movie masquerading as a prestige TV miniseries — one that’s, sadly, not even trashy enough to qualify as a guilty pleasure. 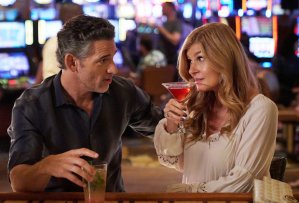 Based on a true story that inspired a popular Los Angeles Times podcast, Dirty John stars Britton as high-end Orange County interior designer Debra Newell, whose unlucky-in-love streak seemingly ends when she meets John (Eric Bana), a handsome doctor who served in Iraq. Debra’s daughters don’t trust him, but she falls head over heels anyway, ignoring all the warning signs and impulsively marrying John after just eight weeks of dating. Only then does she dig into his past and discover he’s left a terrifying trail of lies, drug abuse and toxic relationships in his wake.

Dirty John‘s story certainly has the potential to be juicy; as fans of the podcast know, it has plenty of unexpected wrinkles to it that are stranger than fiction. But here, those wrinkles are all flattened out and shoved into a premade movie-of-the-week template we’ve seen a hundred times before. It artlessly trudges from plot point to plot point, often repeating itself to fill out the full eight hours. (We must see Debra defend John to her family a half-dozen different times in the first three episodes alone.) There’s not a lot of nuance to be found here, with any trace of psychological depth replaced by cheesy love montages and paint-by-numbers confrontations. We’re given no sense of why Debra is making these terrible decisions… over and over and over again.

As a lead character, Debra is disappointingly bland, and more than a little dim; frankly, it’s painful to watch Britton play someone this oblivious. Even after learning how dangerous John is, she continues being frustratingly dense, which makes it nearly impossible to sympathize with her. But of course, “when you look at someone with rose-colored glasses, all the red flags just look like flags.” (That quote comes from BoJack Horseman, by the way: an animated comedy about a talking horse that delivers about a thousand times more emotional insight than Dirty John ever does.) 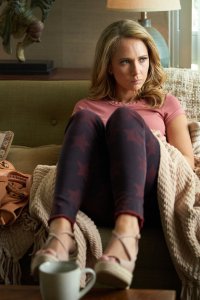 Britton isn’t the only cast member who’s poorly served here. Juno Temple (Vinyl) and Julia Garner (Ozark), both impressive young actresses, are stuck playing Debra’s vapid daughters, both with irritatingly high-pitched Cali girl voices that left me wondering if there might be an undetected helium leak in their apartment. (There’s a hint of cruel, Real Housewives-style condescension from Bravo here, but the daughters aren’t written sharply enough to serve as comic relief.) Bana is just a sociopathic blank slate as John, and never really projects the menace necessary to make him a compelling villain. Plus, there’s Jean Smart as Debra’s mom, and Judy Reyes as a private detective snooping into John’s past… but take away the big-name cast, and you’re left with a below-average “husband from hell” movie you wouldn’t even finish watching on a lazy Sunday just to see how it ends.

Are there any saving graces here? Well, Debra is very comfortably wealthy, so the luxury homes and tasteful interiors are beautiful to look at, at least. And the plot does get marginally more interesting when we start delving into John’s tangled past, though not nearly enough to justify an eight-hour investment. Dirty John is mostly a missed opportunity… and a total waste of Britton, an immensely appealing actress who deserves a TV vehicle worthy of her talents. Let’s hope Debra finds someone better — and Britton finds something better, too.

THE TVLINE BOTTOM LINE: Don’t be fooled by the great cast: Dirty John is a flimsy, lame-brained Lifetime movie dressed up as prestige TV.