Michael and Janet test the uppermost limits of ethical living this week on The Good Place — with the help of a very special guest star. 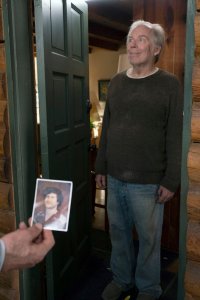 Yes, that is the great Michael McKean — where’s his Emmy for Better Call Saul, huh? — playing Canadian nice guy Doug Forcett, the same guy whose portrait is hanging in Michael’s office. As we know, back in the ’70s, Doug got high on magic mushrooms and figured out how the afterlife works, with stunning accuracy. Now he lives the most ethical life possible, humbly tending to his radish garden in the woods and adopting every stray dog and wolf that steps onto his property (“I’ve been mauled several times”), in an effort to accumulate enough points to get into the Good Place. Michael and Janet can’t believe their luck: Now Doug can serve as that “blueprint for humanity” they were looking for, right?

Well, maybe not: Doug might be too nice. His drinking water is filtered from his composting toilet (ick), he volunteers to be a guinea pig for skin-burning cosmetics so they won’t test on animals, and he lets a local punk kid named Raymond walk all over him, even doing the kid’s laundry for him. Janet observes that Doug has become a “happiness pump,” someone who does everything to make others happy, even if it makes him miserable. To prove her point, Doug has an ugly mental breakdown when he accidentally steps on a snail, making Michael and Janet endure a memorial service and vowing to walk to Edmonton to donate to a mollusk charity in the dead snail’s honor. Michael tries to encourage him to loosen up and live a little (“Drink regular water that wasn’t inside you!”), but Doug refuses; he just can’t risk eternal damnation. So maybe living a life strictly according to Good Place points isn’t such a great idea. 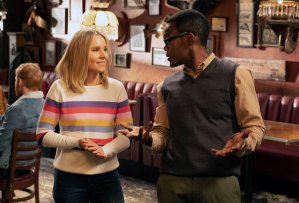 Meanwhile, the four humans are unwinding at a nearby bar; Chidi and Jason play pool (or whatever Jason thinks pool is), and Eleanor confesses to Tahani her afterlife exchange of “I love you”s with Chidi. She wonders if she should tell Chidi… and Tahani points out that if she’s thinking about telling him, she must want that lovey-dovey moment to happen again. Before she can tell him, though, Eleanor notices that the bar is full of Bad Place demons — and before Jason can chuck a Molotov cocktail and shout “Bortles!” so they can make their escape, they’re captured, and the odious Shawn makes his entrance, demanding to know where Michael is.

Michael and Janet stumble upon this scene, and when Shawn announces he’s taking all of them to the Bad Place, Janet shocks us by setting aside all logic and shouting, “Screw it, let’s fight!” And she kicks ass, actually! It’s mayhem, with Janet karate-chopping demons left and right and kicking them through Michael’s cosmic door back to the afterlife — and in the midst of all this chaos, Eleanor tells Chidi they were in love once… and she might be in love with him again. They finally get Shawn subdued and tied up, but he says they’re all headed for the Bad Place anyway — even Doug. This makes Michael think the point system must be off, so he plans to get answers from the afterlife’s accountant… but when more demons show up, Janet is forced to zap all of them back to her void. Goodbye, Earth! 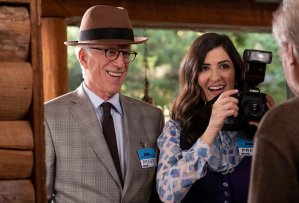 * Michael telling Doug he’s a reporter: “My name is Michael Scoop. This is my photographer, Janet… Scoop. She’s my sister. We’re the Scoops.”

* Chidi: “I’m so jet-lagged, I can’t even regrender my chorff. [pause] I don’t even know what I was trying to say.”

* Jason: “That is one of the best things about pool, dog: There are no rules.” Chidi: “I am one hundred percent sure there are.”

* Eleanor: “When is the right time to tell someone you were passionate lovers in an alternate timeline in the afterlife, but he doesn’t remember because, technically, none of that happened in this strand of the multiverse? You know, I’ll just check with Yahoo Answers. I’m sure someone’s weighed in.”

* Doug introducing Michael and Janet to his many animal friends: “I don’t name them, in case they already have a name they prefer.”

* A panicked Doug: “Do either of you know anything about snail first aid?” Janet: “Yes. I mean no.”

* Tahani, after Eleanor says the bar is full of demons: “Eleanor, just because these people are wearing cheap leather and stonewashed denim… they’re still part of the Queen’s realm. Calling them demons is a bit much.”

* Michael, wondering why Shawn is so obsessed with these humans: “You don’t have enough nostrils to stuff with wasps?” Shawn: “I don’t want just any wasp nostrils. I want these wasp nostrils.”

* Jason: “Evidence isn’t a good thing that you want. It’s a bad thing that you destroy, or you go to jail.” (After that, Michael sends him on a hunt to fetch a coaster: “I just needed a 30-second break.”)