For all you Eleanor and Chidi ‘shippers out there (“Chidinor”?), Christmas came early with this week’s Good Place. 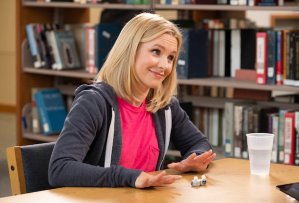 In an Arizona library — the least populated place they could find — Eleanor begs Michael to flood her brain with memories from the afterlife, so she can remember telling Chidi that she loves him. Luckily, Michael has a device that can do just that, and after a trial run that fries the hair right off Eleanor’s head, she flashes back to studying free will vs. determinism with Chidi in the Good Place. They have a cute little moment when she hands him a tissue before he even sneezes, and their bond only grows when Michael invites the residents to Pick-a-Pet Day, where they can pick an animal that will bond to their souls forever.

Eleanor chooses a lizard that wears a tiny cowboy hat, Tahani gets a “mirror centaur” that’s basically her with a horse body… and naturally, Chidi can’t decide between two adorable puppies and gets stuck with an owl. After the owl gores him for trying to teach it to play fetch, Eleanor volunteers to ask Michael if Chidi can swap his owl out for another puppy. Michael (still in torture mode) tells her to wait, because they’re throwing a party that night where the residents can transform into their animals — and Chidi could fly! But when Eleanor loses her lizard, Chidi skips the party to help her look for it. Sure, he could be soaring through the air right now, but “I just decided I’d rather be helping you”… and they kiss. 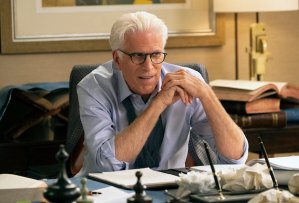 Soon, they’re all lovey-dovey, cuddling on the couch and sharing a bucket of popcorn shrimp. We also see their trip to Mindy St. Clair’s, where they exchanged “I love you”s in bed together. But Michael cuts off the flashback there, and doesn’t want to show Eleanor the rest. (It won’t make him look great, you see.) He relents, though, and we then see a loved-up Eleanor and Chidi confronting Michael in his office, insisting that even if he reboots them, they’ll find each other again because they’re soulmates. “There’s no such thing as soulmates, you dingus!” Michael laughs. “I made it up!” He snaps his fingers, and they’re rebooted again. Yeah, he was right; that didn’t make him look great.

Eleanor doesn’t hate him, though; she just takes that as proof that, since Michael manipulated her and Chidi into being together, she’s incapable of true love. She fully embraces determinism — the philosophy that we have no control over our actions, and there’s no such thing as free will — even as Michael tries to show her how her unpredictable choices really screwed up his plans. He even shows her an afterlife moment when he was completely out of ideas, having studied every last neurosis in her brain. He had a “15 million point plan” to torture her, he says, and she still found ways to surprise him.

She goes so far overboard with her determinism kick that Michael has to dump a glass of iced tea on her head to get her to snap out of it. She’s just falling back into her old Eleanor defense mechanisms, he points out, because nothing scares her more than being vulnerable. He goes to pick up the other humans at the airport — “the worst possible use of free will,” he admits, but he’ll do it because they mean something to him. Eleanor admits he’s right about her defensiveness, and after sharing a meaningful glance with Chidi, decides they need to take the Soul Squad to the next level by finding someone who can serve as “a blueprint for humanity” to look up to. She suggests Rihanna, but Michael has a better idea: “We’re going to rural Canada!” And meanwhile: Bad Place demons Shawn, Vicki and Val use a makeshift portal to come down to Earth themselves. Uh-oh. 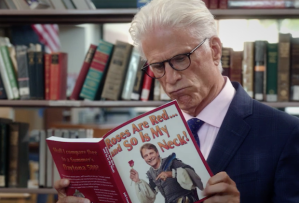 * The Tostitos Public Library (“brought to you by Go Daddy”), where Michael observes, “All they have in the poetry section is Jeff Foxworthy books.” (Plus: That book title!)

* Eleanor explaining why she’ll miss reading Nietzsche: “I spent a lot of my life thinking I was better than everyone else, and he showed me why I was right.”

* Jason: “We can get mythical animals? Maybe I’ll get a penguin!” Eleanor: “Penguins are real.” Jason: “That’s the spirit, Eleanor. They’re real to me, too.”

* Tahani backhandedly telling Eleanor the lizard was a perfect choice for her: “You both have combination skin.”

* Michael scoffing at Eleanor saying that their “love is stronger than anything you can throw at us”: “I could throw an elephant at you! You think a thrown elephant wouldn’t crush you because of love?”

* Michael: “I’ll swear on a Bible, like you humans do. I can grab one right now. It’s the only book they have in the sex-ed section.”

* Michael revealing the contents of Eleanor’s brain, including her “frequent sex dreams about Sam the Eagle, from the Muppets.” (Eleanor: “He’s very authoritative, and I find that reassuring.”)