The Good Place‘s Eleanor works through some deep-seated mommy issues this week… with a mom she didn’t even know was still alive.

Michael joins Eleanor in Nevada as she tracks down her sleazebag mom Donna, who faked her own death to avoid paying a $30,000 charity auction bid to date Gene Simmons, “outbidding everyone by $29,800.” Now her mom calls herself Diana Tremaine — hey, that’s Eleanor’s fancy fake name! — and lives with her boyfriend Dave (played by the always enjoyable Andy Daly) and his cute young daughter Patricia. “Diana” has shockingly cleaned up her act, and is even running for secretary of the PTA. They look like a happy, functional household… and Eleanor doesn’t trust it one bit. 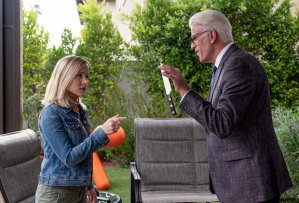 She’s convinced that Donna is scamming Dave somehow, and searches the house frantically for the stash of cash she thinks her mom must be hiding, even threatening to slice open Patricia’s stuffed animals to look inside. But Michael thinks Donna might have actually changed, and quickly bonds with Dave, since they’re both architects. (Dave built “the new Hooters on I-15,” Donna brags. “It looks classy. Like a bank.”) Eleanor stews as Donna makes her pitch for PTA secretary, finally realizing she’s just mad because “I wanted the mom who made me afternoon snacks, instead of just telling me to look for loose fries in the McDonald’s ball pit.” If Donna was able to change into that kind of mom for Patricia, she concludes, “I just wasn’t worth changing for.”

Eleanor does eventually find that stash of cash, in a box of laundry detergent, but Donna was just keeping it in case things with Dave go south. Eleanor admits that her mom actually seems happy in her new suburban life: “No, Mom. Ya basic,” she tells her, in about the most tender way those words have ever been uttered. They hug it out, but Eleanor still thinks having a nightmare for a mom scarred her for life: “I never even told a boyfriend I love him.” That’s when Michael confesses that she actually did… to Chidi, in the afterlife. 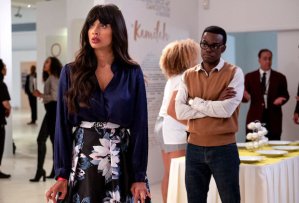 ART HER-STORY | Across the globe in Budapest, Tahani is forced to stand in line to get a minute with her ultra-famous sister Kamilah, who’s unveiling her new installation of unremarkable art to an adoring crowd. (It includes an omelette bar!) Tahani wants to help her sister to get into the Good Place, and offers her a sincere apology for all the hurt she’s caused her over the years… but Kamilah refuses to accept it and petulantly shuts down the installation, blaming Tahani for it. When even Chidi is instantly won over by Kamilah, an infuriated Tahani resorts to grabbing a fire axe and plunging it right in the middle of the omelette bar — which lands her and Chidi in handcuffs.

That gives Tahani time to realize that she and Kamilah are only at odds because their parents constantly pitted them against one another. (We see a flashback of Tahani’s mom and dad challenging the girls to paint their favorite moment from French military history… with the losing painting serving as kindling for the fire.) Tahani realizes that all of Kamilah’s paintings are of pairs — “they’re of us” — and breaks through her sister’s icy façade with a hug: “I’m sorry that our parents are such wankers.” Kamilah softens, and eventually credits Tahani as the co-artist on her installation, titled “A Fractured Inheritance.” Tahani would rather call it “The Buried Hatchet”… but she keeps that to herself. See, she’s growing!

* Donna meeting Michael, who she refers to as “this stretched-out, sexy Alex Trebek.” 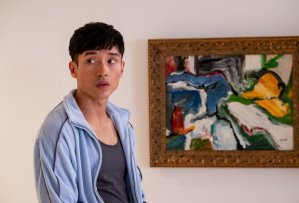 * Basically every bit of Jason in an art museum, including his analysis of one of Kamilah’s paintings: “They’re a pair of boobs, and then two extra side boobs. It symbolizes that boobs come in all shapes and sizes… and distances apart!”

* Michael explaining how he knows Eleanor: “Let’s just say we lived in the same neighborhood.” Dave: “What a fun way to say a normal thing!”

* Eleanor, convinced that Donna is going to disappear on Dave, “like Keyser Soze, right after he admitted to groping all those people.”

* Tahani, after noting that Kamilah’s non-acceptance of her apology will “hinder” her chances of getting into the Good Place: “Also, I am going to strangle her, which will hinder any air from getting into her lungs.” 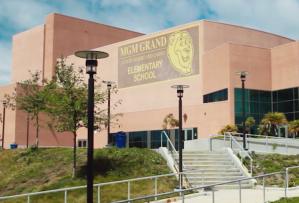 * Dave telling Eleanor: “Your mother is a very competent and selfish lover… it’s perfect for me, because I don’t know what I want.”

* Donna, after winning the election for PTA secretary: “I’m gonna need to get a calculator! And maybe a globe? I don’t really understand the job.”

* Michael, flustered after he hands Dave a set of building blueprints that don’t include bathrooms: “I certainly use the bathroom, just like anybody else. I love to sit on the… thing and just, you know, shoot one out.”