We met Jason’s father this week on The Good Place… and this might shock you, but he’s not a totally upstanding member of society.

Jason travels to his beloved hometown of Jacksonville with Michael and Tahani as part of their “Soul Squad” mission to help people get into the Good Place — starting with Jason’s screw-up dad, or “Donkey Doug,” as Jason calls him. Dad is about as bright and classy as his son, answering the door with a bong in hand and inviting Tahani to join him in his Jacuzzi where they can, ahem, “put stuff in each other.” Jason and his pals want to encourage Donkey Doug to resume his electrician’s training, but he and Jason’s equally dopey pal Pill Boy have a better plan: They’ve invented a combination energy drink/body spray called Double Trouble (“Do you spray it on yourself, or do you drink it?” “You both it!”)… but first, they have to break into a couple of factories to get the supplies they need to make it, of course. 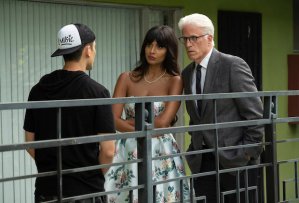 Michael worries that Jason’s dad might be a lost cause, but Jason still thinks they might be able to save Pill Boy. So while Tahani creates a diversion to keep Pill Boy away from the robbery — he’s pretty easily diverted, actually — Jason intercepts his dad at the crime scene… just as cop cars pull up. Donkey Doug decides to do the noble thing, though, and offers to distract the cops while Jason sneaks out the back. (Thanks, Donk… I mean, Dad.) Michael and Tahani convince Pill Boy that they’re actually “secret astronaut spies” from NASA, and give him a “covert mission” to keep working as an aide at the old folks’ home and not commit any more crimes. One soul saved, a few billion more to go. 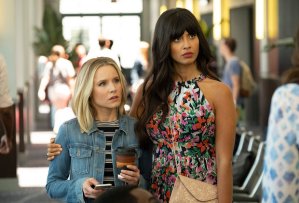 Back in Australia, Chidi realizes he has to break up with Simone; if she learns about the afterlife, she’ll be doomed to the Bad Place, too. He can’t bring himself to lie, so Janet offers to help by constructing a virtual-reality simulator — she knows how to do everything, remember — where he can practice breaking up with her until he gets it right. He tries a hundred different ways, including handing her a very adorable puppy to soften the blow, but when he gets to the real Simone, he just blurts it out: “Ya dumped!” He later apologizes, and they part on good terms. But Eleanor gets a shock at the very end when she says she wishes she could get closure with her parents like Jason did, but they’re both dead. Actually, one of them is “not technically, actually dead,” Janet says. Eleanor’s mom faked her own death… and now Eleanor is headed back to America to finish the job.

* Chidi fretting about Simone: “I’ve avoided talking to her so long, she assumed I have laryngitis, and it went too far, and now I’m on antibiotics!”

* Janet supplying her own “bing!” sound, now that she’s not disappearing and reappearing on demand. 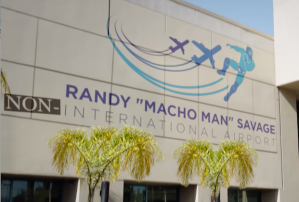 * Jason listing his dad’s get-rich-quick schemes, which include “selling counterfeit truck nuts” and inventing a sport that was “a cross between dodge ball and horseshoes… and everybody died!”

* Eleanor sneaking into Chidi’s breakup simulator to prank him posing as Simone. (“Suck it, you doink!”)

* A repulsed Tahani surveying Donkey Doug’s apartment: “There’s an awful lot of dog hair on the furniture… and I have not seen a dog.”

* Tahani: “Reach for the stars, as I said to my good friend Elon Musk. And then he shot his car into space. [pause] What a weird creep. Why was I friends with him?”

* Janet warning Eleanor that when she enters the virtual-reality simulator, “you might find yourself in a steam room with Jason, who will be wearing an old-timey strongman onesie. It’s a bug in the system.”

* Pill Boy advising a resident at the old folks’ home how to mix her meds with a 5-hour Energy for a “body high, with mild visuals.”

* Chidi’s reaction to Simone telling him, “See you in the next life”: “What? Why would you say that? What do you know?!?”