Archie’s itching to bust out of juvie this week on Riverdale… but is Jughead too busy playing games to help?

After an unsuccessful escape attempt leads to Archie getting pegged by rubber bullets (and literally branded by Warden Norton, ouch), he’s faced with getting an extra year tacked onto his sentence. So Veronica sweet-talks fellow rich kid Elio — remember him? — into getting her an invite to one of Archie’s bare-knuckle brawls, and once she gets some alone time with Archie, they hatch a plan to get him out of there. Since the juvie center is too heavily guarded, they decide to use the fight site… and the drain that leads from the pool where the fights take place all the way to the outside world. 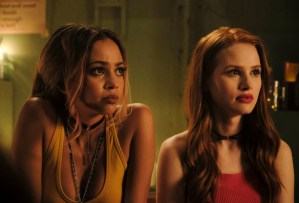 And Archie’s old pal Jughead is happy to pitch in, right? Well, no, actually, he’s gone off the deep end a bit with Gryphons and Gargoyles, holing up in the bunker with Cheryl, Toni and the Serpents and scaring Betty with his weird ramblings about being a “game master.” When Sweet Pea dares to challenge his authority, he has Cheryl shoot an empty can off his head with an arrow, William Tell-style, bluntly telling his Serpent pal: “Don’t defy me again.” And when Betty tries to recruit him to help get Archie out, he just incorporates it into his next G&G quest, as a “rescue mission.” (Kind of explains why role-playing gamers are notoriously girlfriend-less, doesn’t it?)

Veronica kicks her plan into high gear, sneaking into Archie’s next fight along with Josie, Kevin and Reggie as accomplices. But just to make things interesting, Joaquin kisses (!) and then stabs (!!) Archie in the gut at the warden’s request, so he’s already seriously hobbled when he enters the ring and faces… his old cellmate Mad Dog. (And he looks mad.) Archie tries to talk to him, but Mad Dog just robotically pummels him, and sensing that he won’t last long in there, Veronica and the others dump a bunch of makeshift smoke bombs they made in chemistry lab — who says these kids never go to class? — to give Archie enough cover to escape. Mad Dog finally snaps out of it and recognizes Archie, too, and volunteers to hold off the guards while he shimmies through the drain. 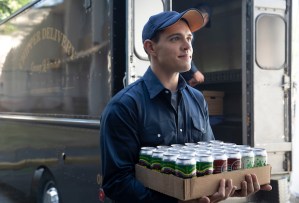 On the other end, Betty helps Archie out of the drain pipe, and they zip off on Jughead’s motorcycle, with prison guards in hot pursuit. After a heart-pounding chase through the woods, they hit a roadblock and it looks like they’re trapped… but it’s actually Kevin on the bike with Betty, not Archie! While they distract the guards, Veronica gets an ailing Archie into a waiting car and drops him off in Dilton’s bunker, where Jughead and the Serpents are playing a G&G quest that eerily matches up with Archie’s ordeal. Nobody on the outside knows about Dilton’s bunker, so he can hide out there for a while, at least.

Warden Norton certainly knows his way around a G&G board, too: He referred to Archie as “the Red Paladin,” and the brand he put on him matches the strange symbols carved into Dilton and Ben. It’s enough to lead Jughead to think that the warden might be the Gargoyle King, but that theory goes out the window when the distraught warden chugs cyanide and dies a blue-lipped death… just as Jughead runs into the branch-armed Gargoyle King in the woods, solemnly bowing down to him. Seriously, who is this guy?!?

* Joaquin managed to escape, too, perhaps as payback for stabbing Archie. Will he and Kevin find each other again? (And where is Moose in all this, huh?)

* How exactly did Archie and Veronica get enough time — twenty minutes! — to get it on in that prison locker room without being discovered? Where’s the security?

* Hey, Kevin’s dad and Josie’s mom are getting married! Yay…?

* Warden Norton mentioned that Hiram paid off three of Cassidy’s friends to testify against Archie at his murder trial and then disappear. Any chance Archie goes looking for those guys now?

* So Archie is fine after that stabbing once Toni “patched him up”? Did I miss the episode where she became a licensed health care professional?

* Quote of the Week definitely goes to Veronica, when she spotted Archie entering the boxing ring with a paper bag over his head: “I’d recognize those abs anywhere.”