Purple reigned on Tuesday as black-ish devoted its 100th episode to honoring Prince and his music. The hits-heavy half hour saw a bunch of the Johnsons recreating some of the artist’s iconic videos and talking about his legacy, all in an effort to convince Jack and Diane of Prince’s majesty.

The milestone installment opened with Jack eagerly awaiting a call from Tiffany, a girl in his class who was planning to come over and study. He and Diane were interrupted by a ruckus in the kitchen, where nearly the entire family was rocking out to “Let’s Go Crazy.”

“Who was that lady singing?” Jack wondered, causing the entire assemblage to gasp. “Your children don’t know who Prince is?!” Pops yelled, incredulous.

Pretty soon, Dre called a family meeting in the living room, opening the proceedings with (of course), “Dearly beloved, we are gathered here today…” After a brief run-through of Prince’s major accomplishments (eight Grammys, six American Music Awards, a Golden Globe, an Oscar and 100 million albums sold), Dre tried to force the twins into listening to his music until they liked it. When that backfired, he told the story of how Prince’s music helped him gain the confidence to surmount a truly terrible first date with Bow. 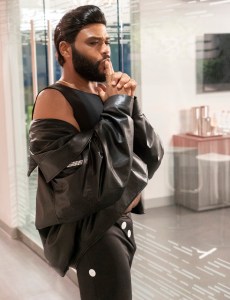 And that’s when the video tributes began. They included:

* Junior (as Prince) in “Sexy M.F.,” with Bow yelling “Language! Language!” before he got to singing the song’s risque title

Still, Jack just wasn’t feeling it. Dre took that hard, confiding in Bow that he’d been so upset over Prince’s death in April 2016, and hoping that he’d be able to pass along his love for The Artist Formerly Known as The Artist Formerly Known as Prince. “This is what parenting is: We just expose our kids to what we like, and they get to choose what they love,” she says by way of consolation.

But then Tiffany shows up, and when Jack sees her, he has a flash of “Kiss” and winds up running out to where his parents are in the backyard, proclaiming, “Mom, Dad: I totally get Prince!”

The episode ends with the whole family singing along as Dre plays (the Prince-penned) “Nothing Compares 2U” on a keyboard. (And then Charlie gets in on the act with a “Raspberry Beret” homage at work the next day.)

Now it’s your turn. Grade the episode via the poll below, then hit the comments to let us know what you thought!