The truth is out — there on NBC’s Manifest, where Michaela Stone has confided in her almost-fiance the strange things she has experienced ever since she returned from that extremely strange Flight 828.

The mystery continues this Monday at 10/9c, with the seventh episode of the hit drama’s 16-episode freshman run. Has Jared truly accepted what Mick shared? Will their new bond sour a cozy dinner-for-three? And whose side is series lead Melissa Roxburgh on when it comes to the Ben/Grace/Danny tensions? Here’s what Mick’s portrayer had to say.

TVLINE | We’re coming off a big episode, where a lot happened. For example, were you glad that Michaela came clean to Jared sooner rather than later?
Yeah! It was a good build-up. She’s been going through some weird stuff, so obviously she can’t hold that in too, too long without him trying to admit her to a psych ward or something. Jared couldn’t just follow her along blindly anymore, so he demands an answer, as he should. It was a good moment for them.

TVLINE | And it’s probably a more interesting dynamic for you to play as actors. As the superhero shows always say, it’s more interesting when characters know the secret identity.
Yeah, especially because Michaela and Jared are so close. She can tell Ben all the stuff that’s happening to her, but she also needs that outside person. It’s interesting to see what happens after this, too, in terms of how Jared deals with this new information and how he looks at her, and how he cares for her because of it. It does add a new layer to their relationship. 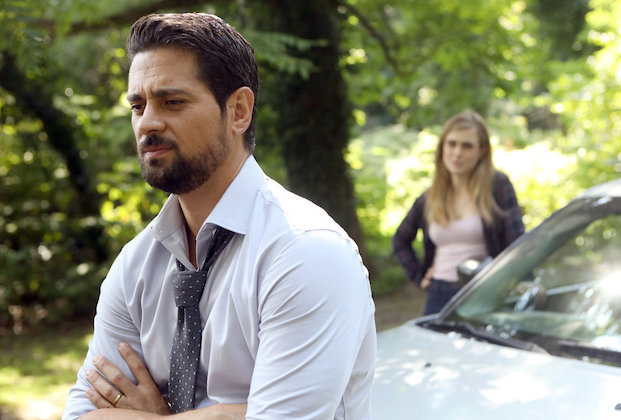 TVLINE | We got a small taste last week of his immediate reaction to the truth. How would you typify his acceptance of what Michaela has shared?
I wouldn’t even say that it’s acceptance. She blurts it all out in that moment, and what we’re seeing in that scene is Jared trying to figure out what he believes, how much of it he does believe, how much he can wrap his head around it, how he relates it to Michaela, a person that he still really cares about…. It’s very out-of-the-ordinary stuff that’s happening, so yes, I think it would take a normal human being a second to process everything that she was saying. What you’re seeing in that scene is, “I love you as a human being… and what you’re saying is really crazy… so I have to kind of take a second for myself!” [Laughs]

I think that Michaela knows that [Jared needs time to process], but I also think that she’s scared that he is going to think that she is nuts. She’s been treading so carefully with what she does and doesn’t tell him because he’s with Lourdes now. In an ideal world, she’d figure it all out and then open up to the people she loves — but that’s not the case.

TVLINE | Meanwhile, she’s oblivious to the fact that she shouldn’t be telling him anything, because he’s under Agent Vance’s thumb. The tables are turned; he has the secret now.
Completely. Completely. I think there was a scene where he said, “You should open up to me,” and she said, “Well, things are different now.” She did lose her go-to person, so even though it is a bit of a weight off her chest, she can’t really be having these moments with Jared while he’s with another woman. That’s not fair to anyone.

TVLINE | Speaking of Lourdes, I understand that you’ll be joining her and Jared for dinner this week….
[Laughs] Jared forces me to have dinner with him and Lourdes, and let’s just say that it doesn’t make it to the end of the night. The night does not get completed. There are some really good moments during the dinner… and then there are some not-so-good moments at the dinner. Michaela is kind of forced to leave a little early.

TVLINE | Who gets the calling in this episode?
Michaela has the calling, and it’s a really good one, too, because it ties back to some stuff that she has been circling from before the plane and after the plane. It ties into that in a really… I don’t want to say “beautiful” way, because it’s heart-wrenching… but for Michaela it’s a nice moment that will hopefully tug on the audience’s heartstrings as well. 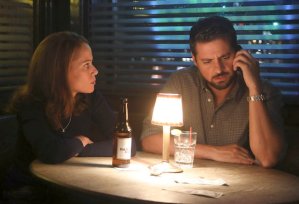 TVLINE | A few weeks ago, we got flashbacks for the loved ones left behind. How do you think Michaela would react if we made her watch those scenes with Jared and Lourdes? They’re commiserating at a bar, “Oh, we feel so bad about our lost friend…,” and then a bit down the road….
[Laughs] I think that as a normal human being, that would be really painful to see! Given enough time, as she has been, I “get” how those two got there, but I don’t think she’d want to watch that at all.

TVLINE | Some of our readers have been a bit protective of you. “Why were they at a bar together anyway? “That hussy Lourdes was after him from go!”
I mean, it’s lonely out there! Especially for Lourdes. I get them forming a bond, but yeah, that sucks, because I wasn’t dead. But Michaela loves each of them, separately and together — I mean, she doesn’t love them together. But she loves them, together. It’s very complicated! (Get scoop on the game-changing news being dropped next week.) 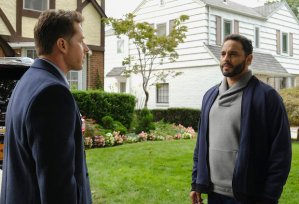 TVLINE | Speaking of complicated, I’m curious to hear your POV on the Ben/Grace/Danny triangle, because that also has viewers polarized.
I think I can look at the one a little more objectively. Ben really struggled with being a present dad beforehand, because of Cal’s leukemia — and he’s struggling with that now, as well. Grace thought he had died and moved on to somebody who gave her joy, and I’d say that she deserved it. She really did deserve someone to make her laugh again and make her smile again. And it’s important that Olive had a Dad figure growing up.

TVLINE | Olive’s own, “But Danny’s my dad, too” moment triggered some viewers.
In an upcoming episode, we see a bit more of a struggle between Ben and Olive and that dynamic, because Olive really got shafted growing up in this household. It’s no wonder she gravitated towards Danny. There was a scene that got cut where she talks about it, and it’s so heartbreaking. She goes, “I was the sister of the kid with cancer, and then I was the sister of the kid who went missing…. I never got to be Olive.”

TVLINE | My hope is that Danny sticks around, maybe gets wind of Ben’s surreptitious meet-ups with attractive Saanvi….
We’ll see what happens! But no, I don’t hate Danny at all for being in Grace and Olive’s life. I think it’s a really interesting plot.

TVLINE | During our New York Comic Con panel, [showrunner] Jeff Rake teased big “card turns” in Episodes 12 and 13. Have you filmed those yet?
We’re on Episode 11 right now, but I did just get the script for 12, and yeah, we do turn a page in a really cool way. Some more people are introduced to the picture that really throw a wrench in everything. They open up the mystery in a way that no one expected. We also get to see a bit more of civilians’ reactions, in the way of The Believers [a la the stranger who approached Cal on a sidewalk]. I don’t actually know what happens in that realm, but they’re back in the picture, and that’s a cool dynamic for the show.