Before The Voice rang the final bell on its Season 15 Knockouts Monday, the sing-off’s coaches sent to the Top 24 an additional nine contestants, among them, one who’d always seemed destined to go the distance, one who I’d swear was drawing sartorial inspiration from Three’s Company’s Mrs. Roper, and one who will likely forever be known as much for her “stank face” as her vocals. But, did we at last see the end of Ben Affleck Lite, Steve Memmelo? Read on, and we’ll review not only his but all the performances. 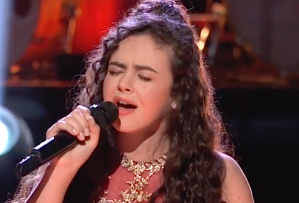 Team Kelly: Chevel Shepherd singing “Travelin’ Soldier” (Grade: B+) defeated Sarah Grace singing “I’d Rather Go Blind” (Grade: A-) — Sarah saved by Kelly | After Kelly informed us that she’d paired her youngsters because their sounds were so totally different from one another’s, Chevel’s test run of her Dixie Chicks cover brought to her coach’s mind Loretta Lynn. (It brought to my mind a wobbly-at-best Loretta toward the end, but hey, this was just practice.) Sarah sounded way surer of herself in rehearsal. I didn’t reckon this was going to be much of a battle. Er, Knockout, I mean. In the moment of truth, Chevel started off pretty strong. Nervous as hell, but she sounded good. And as she got further into the song, her nerves seemed to burn away in front of our eyes — and ears. She sounded better and better — gorgeous and vulnerable with an appealing quaver to her voice — at least until that dicey final note. When Sarah took her turn… well, as good as Chevel had been, I figured it was all over. Sarah was that kickass. Not only was her rich, bluesy vocal flat-out stunning, but she looked so at home on that stage, she might as well list it as her return address. I couldn’t believe Kelly, for even a second, thought of letting her go. 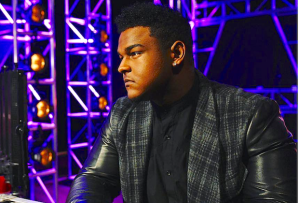 Team Adam: DeAndre Nico singing “Wanted” (Grade: B+) defeated Jake Wells singing “Yellow” (Grade: D+) | In rehearsal, DeAndre impressed his coach with his soulful rendition of Hunter Hayes. But as good as it sounded, they still decided to raise the key half a step… which sounded like a misstep to me. (What’s the rule? If it ain’t broke, don’t fix it!) Next, Mariah advised Jake not to get up from the piano and work the stage during his performance; just remain seated. Didn’t make sense to me at the time, but maybe she’d rightly realized that the last thing the Brad Pitt lookalike needed to make it through his number was anything extra to distract him. Come showtime, Jake struggled. A lot. He was so pitchy that he sounded more like a measly one-chair turn than he had during his Blind Audition. This was DeAndre’s to lose. And he wasn’t about to do that! He sang with enough passion and power that he almost made me forget the train wreck that had come before him. And, considering that his coach called him an “ultra competitor” and “such a crazy bonkers singer,” it shouldn’t have come as any surprise that Adam gave the win to him. (Although I have to admit, I worried for a few seconds. Sometimes coaches make straaange decisions.) 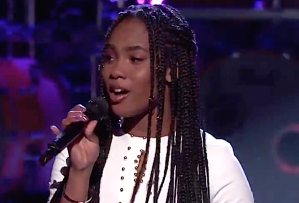 Team Jennifer: Kennedy Holmes singing “What About Us” (Grade: A-) defeated Anthony Arya singing “Operator” (Grade: C) | When I saw that JHud had paired these two, I figured it was for one reason and one reason only — to make it even easier to cut Anthony (whose number really should’ve been up in the Battles). But he sounded sweet in rehearsal — like his vocal was being brought to us directly from 1970s AM radio. I still didn’t think he’d be any challenge for Kennedy, mind you. She’s a force of nature. During her run-through, Jennifer said that all she wanted to hear more of from Kennedy was vulnerability. When Anthony took to the mic, aww. I wanted to like him. Really, I did. But, as sensitive as he seemed, he fell flat vocally. The warmth in his expression as he performed just didn’t translate to the notes that he hit (or tried to). Up second, Kennedy started off her Pink cover sounding so perfect, you’d have sworn you were listening to a number that had been mixed and mastered. And the really shocking part? She hardly ever faltered. There was a spot toward the end where I thought she might have been running out of breath, but for 99 percent of the song, her vocal was as flawless as it was massive. Final Four for sure. 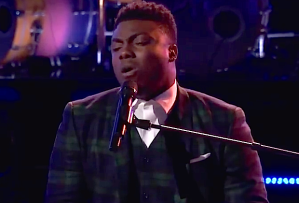 Team Blake: Kirk Jay singing “In Case You Didn’t Know” (Grade: A+) defeated Colton Smith singing “Lady Marmalade” (Grade: D-) — Colton stolen by Jennifer | In rehearsal, Kirk explained that he’d chosen his song to let his ex know she was still on his mind. Or she had been until he wound up in the same room as Mariah, to whom he adorkably declared his love. Colton… he didn’t seem to have that firm a grip on “Lady Marmalade.” And on stage, we found out just how loose a grip he had on the classic. When we joined the number toward the end, he was suddenly unable to hear himself and lost his place in the middle of a “Voulez vou coucher avec moi?” To his credit, he recovered and finished the song. But it was clear from the little that we heard that the key might not have been quite right for him; the performance, not entirely thought through. Singing second, Kirk put so much heart into his voice that at times, it felt less like we were listening to a performance than eavesdropping on a confession. And there wasn’t a bum note in the entire song. He looked like a star behind his piano, he sounded like a star behind that mic. This was a no-brainer. He’s gonna sail through the Playoffs. 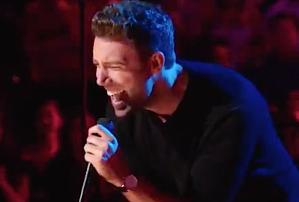 Team Adam: Steve Memmelo singing “Unaware” (Grade: C-) defeated Delaney Silvernell singing “Praying” (Grade: D+) | Mariah worried during rehearsal that Delaney’s Kesha cover started in a register that was lower than she was comfortable with. But La Carey laid out a plan for Adam’s newest recruit to sorta “cry” her way into the song. Would it work? We’d see. When Steve tried out his number, yikes. It was painful. Adam and Mariah encouraged Steve to use more of his falsetto. Which would have been all well and good, had his falsetto been better. When Delaney hit the stage, Mariah’s “cry”-into-the-song method helped but not enough. Delaney was still pitch-imperfect for much of the number. And if there’s one thing that doesn’t help when a singer’s pitchy, it’s singing even more loudly pitchy! Ugh — did that mean we were gonna have to hear Steve again in the Playoffs? When he took his turn at the mic, we quickly learned why he was so reluctant to use his falsetto — it had to be the faces that he has to make to try to reach those high notes, right? This wasn’t the worst performance Monday, but it was so mediocre and cheesetastic that the only thing it could possibly stand a chance of winning was a particularly lackluster Karaoke Night. Can’t believe we’re gonna have to hear Steve again.

Team Blake: Michael Lee singing “Whipping Post” (Grade: A-) defeated Chris Kroeze singing “Burning House” (Grade: A) — Chris saved by Blake | After Michael hilariously supported Mariah’s decision to drop out of beauty school as a kid, Chris wowed both their mentor and coach with his melodically tweaked rendition of “Burning House.” But as sincere as his rehearsal was, Michael’s scorching Allman Brothers Band cover sounded like it was going to be impossible to beat. Up first on stage, Chris did a fantastic job of going from tender to tough and back, drawing us in with soft, controlled tones, then knocking us out with his rasp-kicking on the bigger, showier notes. A genuinely fine, radio-ready performance. And maybe the biggest compliment I could pay Chris was that I didn’t just enjoy his singing, I believed every word. That’s rare and super cool, no? When Michael stepped into the spotlight, it took a while before his performance achieved liftoff. There was nothing vocally wrong with it, it was just the song. When it took off, so did Michael. Then, da-amn! He not only sang like a man possessed, he reminded us that his stage presence was as devilish as his altar-boy looks were not. In short, it was so hot, they were lucky he didn’t set off fire alarms. Anyway, after Blake decided via coin toss that Michael was the winner, he turned around and used his last save on Chris.

So, which coach do you think has assembled the strongest team? (Team Blake, IMHO.) Which of the last Knockouts performances most impressed you? (Kirk Jay for me.) Vote in the poll below, then hit the comments.