Outlander‘s Claire and Jamie might’ve arrived in the American colonies via a near-deadly shipwreck, but when we pick up with the Frasers in the Season 4 premiere Sunday (Starz, 8/7c), their life in the New World is relatively smooth sailing.

Though they don’t have any land… or jobs… or much money to their name, they’re not separated by 200 years, malicious Redcoats or time-traveling witches. So on the whole, series stars Caitriona Balfe and Sam Heughan tell TVLine, life is verra good. 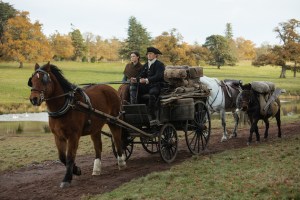 “As the season starts, it takes them a while to figure out, what, exactly their future is going to look like,” Balfe says. “There’s a lot of options on the table for them.”

First order of business: Decide where to live. “They’re going to return back to Scotland initially. They see the opportunity there,” Heughan previews. But, as Balfe points out, Scotland is Jamie’s homeland — not Claire’s. “Whereas Jamie has such a strong pull back to Scotland, for Claire, she spent 20 years living in the America of the future. So she has an emotional pull to this land,” she says. “It maybe takes Jamie a bit longer to see the possibilities there. But he also has the tie of it being the land that Brianna grew up in, and that’s very important to him.”

If you’ve read Diana Gabaldon’s Drums of Autumn, which was the source material for Season 4, you’re aware that Claire and Jamie’s daughter, Brianna (played by Sophie Skelton), and her love interest Roger (played by Richard Rankin) are more heavily involved in the story than in the novel series’ first three installments. Executive producer Matthew B. Roberts says that Starz’s adaptation follows suit — but Claire and Jamie enthusiasts dinna need to fash.

“Jamie and Claire will always be the center piece of Outlander, but it’s nice that we can branch off and tell other stories,” he tells TVLine. “The other nice thing about it is that all the other characters kind of flow through Jamie and Claire, always… Every story that affects, say, Bree and Roger, also in a way affects Jamie and Claire.”

Now, on to what you really want to know: Near the beginning of Drums, there’s a scene that takes place by a river and involves the Frasers, a very warm evening and not many clothes. While we’re not going to tell you whether or not that moment is recreated in Season 4, while talking with Outlander‘s leads, we did raise the topic of shooting outdoor love scenes.

“There is a nookie scene where, when we were shooting it, it [was] so freaking cold,” Heughan says.

“We actually reshot, because there’s a scene in Episode 1 that we shot in November, when it was freezing cold,” Balfe chimes in, chuckling. “We were fully clothed, and we tried to make it as sexy as possible — and I think they decided it wasn’t sexy enough.”

So the interaction in question, which you’ll see in the premiere, was recreated at the end of the season when Scottish temperatures were a bit more cooperative. “But it’s still nighttime, and we were doing it at 3 a.m.,” she adds.

“And there were midges,” Heughan says. (For the uninitiated, midges are tiny, extremely irritating flies.)

“And there are midges everywhere!” Balfe says. “So you can do something a little bit more nude at that time, but you’re always dealing with the elements.”