Wicked, one of Broadway’s most popular (sing it with us, “Pop-uuuuu-lar!”) musicals, turned 15 this year, and the witches that got the whole spell started are teaming up with NBC for a celebration of the long-running show. 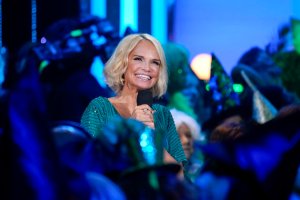 The musical, as its tagline likes to tout, looks at what happened in the land of Oz, but from a different angle. It follows Elphaba, who would become The Wizard of Oz‘s Wicked Witch of the West, and Glinda, the Good Witch, from the time they meet in school through when they fully inhabit their famous roles. Kristin Chenoweth (Pushing Daisies) and Idina Menzel (Glee), aka Wicked‘s original Glinda and Elphaba respectively, haven’t played the parts in years but reunited for Monday’s hour-long special (10/9c), A Very Wicked Halloween: Celebrating 15 Years on Broadway.

While reflecting on her time in Glinda’s pink and sparkly shoes, Chenoweth tells TVLine that her then-naivete about showbiz was a blessing of a sort. “The thing that keeps running through my mind is, I didn’t know what I didn’t know. And it worked for me at that time,” she says, chuckling. “Now, I have a little better understanding of life, how things work.” 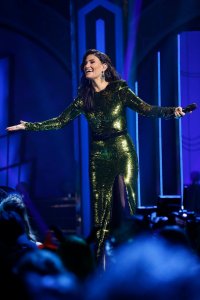 Menzel adds that returning to the songs — which she and Chenoweth both have incorporated into their solo acts over the years — means making a choice between stepping back into the character or interpreting the lyrics through her own experiences as a 47-year-old woman. “I would think on most nights, though, I return to the young girl inside me when I sing it,” she says. “Because even as women, we all have the young girl in us that we need to keep talking to and telling to believe in herself, and to own who she is. And to really understand that being different, being powerful is not angry or ugly. It’s beautiful and extraordinary.”

Lambert became intimately familiar with the show while auditioning for its first national tour. “I just remember thinking to myself, ‘These are big songs,'” he says. “As a singer, it was like, wow. These are dream parts, particularly the girls. And then [Glinda and Elphaba’s romantic interest] Fiyero has this amazing duet [and] an amazing song in the first act.” (In the special, Lambert performs that duet “As Long as You’re Mine” with R&B singer Ledisi.)

Wicked made Menzel and Chenoweth major players, but that doesn’t mean things always went smoothly. Menzel recalls that an entrance by co-star Norbert Leo Butz (Bloodline), who played Fiyero in the original cast, was often the source of, well, drama. “Norbert would always swing in on this rope, and then the rope would swing back and it would catch [Chenoweth’s] tiara and drag her around,” the actress says, laughing. “And I’d have to keep myself from peeing in my pants.”