Megyn Kelly‘s Today show colleagues did not hold back when addressing her inexcusable defense of blackface.

To recap: Kelly on Tuesday stated on-air that it isn’t “racist” for white people to darken their skin with makeup on Halloween as long as they’re portraying an actual person or character. Later that day, she sent an internal email to her staff, apologizing for her words. It read in part, “[L]istening carefully to other points of view, including from friends and colleagues, is leading me to rethink my own views. I realize now that such behavior is indeed wrong, and I am sorry.”

On Wednesday’s Today, a visibly upset Al Roker was first to take Kelly to task for her misguided remarks. “The fact is, while she apologized to the staff, she owes a bigger apology to folks of color around the country,” he said. “This is a history going back to the 1830s — minstrel shows to demean and denigrate a race wasn’t right.” 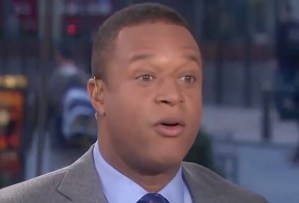 Craig Melvin had even harsher words for Kelly, as well as those supporting her initial comments regarding blackface. “There was some criticism… online that this was political correctness run amok,” he explained. “That’s silly, and it’s disingenuous and just as ignorant and racist as the statement itself.”

Then, during the 9 am hour, Kelly issued a second, on-air apology. “I want to begin with two words: I’m sorry,” she said. “You may have heard that yesterday we had a discussion here about political correctness and Halloween costumes, and that conversation turned to whether it is ever OK that for a person of one race to dress up as a person of another — a black person making their face lighter or a white person making their’s darker to make a costume complete. I defended the idea, saying as long as it was respectful and part of a Halloween costume, it seemed OK. Well I was wrong, and I am sorry.

“One of the great parts of sitting in this chair every day is to discuss different points of view,” she continued. “Sometimes I talk and sometimes I listen, and yesterday, I learned — I learned that given the history of blackface being used in awful ways by racists in this country, it is not OK for that to be part of any costume, Halloween or otherwise. I have never been a PC kind of person, but I do understand the value in being sensitive to our history, particularly on race and ethnicity. This past year has been so painful for many people of color. The country feels so divided, and I have no wish to add to that pain and offense. I believe this is a time for more understanding, more love, more sensitivity and honor, and I want to be a part of that. Thank you for listening and for helping me listen, too.”

Hit PLAY on Kelly’s apology above, then scroll down to watch Roker and Melvin’s commentary.

Megyn Kelly issued an apology in an email to colleagues for a controversial comment she made on her show Tuesday about blackface. pic.twitter.com/0MJUvA1tjZ