Armed with the knowledge that their new leader is, in fact, the Antichrist, the witches turned to a few old friends — and frenemies, naturally — on Wednesday’s episode of American Horror Story: Apocalypse.

Cordelia’s efforts took her to Dinah Stevens’ house, where a cool $100,000 earned her a visit with that shadowy slice of man meat known as Papa Legba. But the voodoo daddy wasn’t the only familiar face awaiting Cordelia — it turns out that Nan is now working as Papa’s little mama. “I really like hell,” she told Cordelia. “It’s fun! … I make trouble.” (God, I’ve missed Nan.)

The Supreme’s request was for Papa Legba to open the gates of the underworld long enough for her to lure Michael inside, trapping him forever. Simple enough. But in order for him to betray Satan’s spawn (aka the boss’ kid), he required a hell of a price: each and every one of her girls’ souls. Unwilling to sacrifice those she vowed to protect, Cordelia rejected his offer, returning to Miss Robichaux’s Academy defeated — not to mention, you know, she’s out a hundred grand. 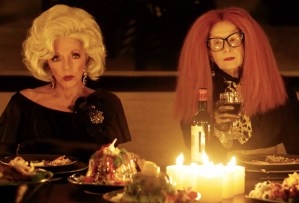 The coven’s second (and far more successful) plan involved getting in touch with Joan Collins’ new character, witch-turned-movie star Bubbles McGee. Fortunately, her magical prowess proved far more impressive than her latest acting gig, a Christmas-themed horror movie in which she tells her dying husband, “I f–ked your business partner every year since 1972!” You know, just another classic holiday film for the family.

Anyhoo, Bubbles has the ability to read into a person’s very soul, to “detect the truth in any situation.” (She also, according to Myrtle, has the ability to go down like no other, but I don’t want to talk about that right now… or ever.) Myrtle put her newly acquired human lie detector to the test over dinner with the warlocks, during which Bubbles learned that they murdered John Henry — and the witches were next.

From there, it was only a matter of resurrecting John Henry (via Zoe and Mallory), kidnapping Ms. Mead (via Coco… though she was basically just a distraction), and catching Ariel and Baldwin in the act of plotting to eradicate the witches. What came next was a deeply satisfying triple execution, as the witches burned their enemies alive — and looked damn good while doing it.

* I’m so unsure how I should feel about Coco. I’d like to believe that she’s more than just a “human Weight Watchers,” but I also distinctly recall Madison mocking her uselessness after waking her in Outpost 3. One thing’s for sure: I’m not unsure about how much I love Leslie Grossman’s performance in the role. Brava.

* While we’re talking about strange powers, what the actual fork did Mallory do to stop Coco from choking? (That’s rhetorical, of course. We all saw her unzip Coco’s neck and pull the damn Hostess snack from her throat. But how? And while we’re at it, what is Mallory, anyway?)

* Can we take a moment to appreciate all the faces in the promo for next week’s episode? I mean, Sandra Bernhard? Harriet Harris? Ryan Murphy is really bringing in all the queens this season.

Your thoughts on Wednesday’s Apocalypse? Any new theories as we — gasp! — begin to approach the end of the season? Whatever’s on your mind, drop it in a comment below.