The world of American Horror Story: Apocalypse may seem like a bleak nightmare, but for Leslie Grossman, it’s a dream come true. “Ryan [Murphy] has a lot of fun writing for Coco — his fingerprints are all over that character,” she tells TVLine. “I know she’s a strong flavor, but stick with her, because it gets interesting. She seems to be one thing, but you never know what she’ll turn into.”

If it sounds like Grossman is being intentionally vague, it’s because she is. “I cannot say anything, only Ryan can do that at this point,” she explains, which is why she was “just as surprised as anyone” when he posted a spoiler-y group photo (possibly set at a funeral) on Instagram earlier this week. “I think he was just so excited,” Grossman says. “Like, the picture was too great.”

Grossman’s character, the vapid-yet-lovable Coco St. Pierre Vanderbilt, is one of several major characters in the frame. Others include Emma Roberts’ Madison Montgomery, Frances Conroy’s Myrtle Snow, Gabourey Sidibe’s Queenie and Taissa Farmiga’s Zoe Benson, all of whom Grossman is “excited” to be working with, assuring us, “It’s not lost on me who I’m standing with in that picture.” 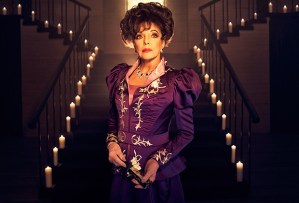 Another person Grossman is having a particularly good time with this season is Joan Collins, whose first character — the glamorous-yet-cannibalistic Evie Gallant — met her untimely demise this week. (Don’t worry, Collins has already let it slip that she’s playing multiple roles this season, so we’ll see her again soon enough.)

“I grew up watching Dynasty, being obsessed with her, so when Ryan told me she was doing the show, I fell to the floor — physically and emotionally,” Grossman says. “She means a great deal to me. And she’s so iconic, which is a word that gets overused now. She’s smart, funny and so talented, but what really struck me about her is that she’s incredibly warm and inviting. … I didn’t think she would be as accessible as she is. She’s literally a dame, and I don’t mean that in the colloquial sense. She’s, like, English royalty. Her lovely husband Percy is also fantastic and is always with her at work. It’s been a joy.”

And last week’s season premiere offered Grossman a different kind of joyful experience: a slap from Sarah Paulson’s Ms. Venable. “How lucky was I to be on the receiving end of — not just a slap — but a backhand, which is even more fierce” she says. “We were really worried about not laughing during that scene, mostly because we felt so bad for the crew. It had been such a long day, and if I was the one who started laughing during hour 13 at work, it wasn’t going to be cute. We managed to hold it together, though.”

With so much of the season still shrouded in mystery — we’re only two episodes in, and we just found out Kathy Bates is playing a robot — Grossman can only offer these parting words as a tease: “All I can tell you is that there are a lot of layers. When you think it’s going to go one way, it goes another. Just let it unfold, and I promise it’s going to be satisfying.”

New episodes of American Horror Story: Apocalypse air Wednesdays at 10/9c on FX. Your thoughts on Season 8 so far? Drop ’em in a comment below.