I feel compelled to grade House of Cards‘ sixth and final season on a curve. Or at the very least with an asterisk attached to it.

In case you’ve just awakened from an 11-month coma, last fall Netflix fired the series’ leading man Kevin Spacey one month into production amid a growing sexual-misconduct scandal. By December, the streamer announced that it would scrap the three episodes previously shot and start Season 6 over with a drastically streamlined narrative (eight episodes vs. 13) that centered squarely on Robin Wright‘s newly-minted POTUS, Claire Underwood.

It’s hard to imagine a more daunting task facing showrunners Melissa James Gibson and Frank Pugliese. Not only were they being tasked with an 11th-hour rewrite of an entire season without their co-lead, but they were being asked to pull it off in a way that brought the entire series to a satisfying conclusion.

So, while watching the first five episodes of Season 6 (all that Netflix has thus far made available for review; the complete season drops on Nov. 2), it was impossible not take into account what all involved were up against. And, when a creative lapse or misstep occurred, there was a temptation to cut them some slack.

That’s my roundabout way of saying that Season 6 is flawed. There are problems with pacing and continuity, with some scenes feeling super rushed and others dragging on far too long. Serious weight is given to mundane moments with other, seemingly more substantial ones ending before they began. Everything just feels a little… off.

And yet, amid the choppiness, I found myself mostly engrossed in what was happening — and the reason for that is Wright. Already a commanding presence in House of Cards‘ first five seasons — the force of nature often even eclipsed Spacey and his scenery-chewing — the actress now goes it alone and more than rises to the occasion. If there were any doubts that she could carry the show, they were erased by a premiere that wastes no time acknowledging the elephant not in the room.

Yes, Frank is dead (something Netflix felt was such a gimme that it spoiled it in its first Season 6 teaser). We learn in the opening scene of his passing, his death casting a cloud over Claire’s nascent presidency. We are initially led to believe that he croaked in his sleep, but, as the season progresses, all signs point to him being a victim of foul play.

Even though Spacey is MIA, his character’s spirit looms large throughout the episodes, as Claire finds herself terrorized by his proverbial ghost and forced to reckon with decisions and pacts he made (and in which she was complicit). Much of the five episodes finds her awkwardly trying to untether herself from his scandal-tinged legacy in order to chart a path all her own, an effort thwarted by sibling political power players Annette and Bill Shepherd, the season’s primary antagonists, played by Diane Lane and Greg Kinnear. 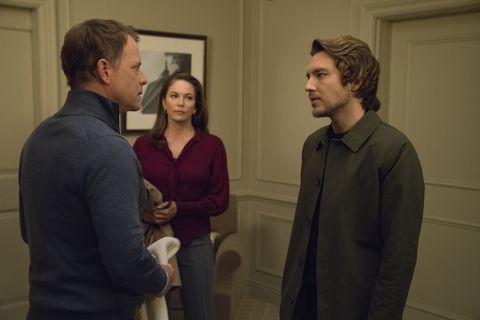 The show wants us to believe that the mighty Shepherds have deep ties to the Underwoods, but it’s hard to buy into their so-called complicated, shared history considering, um, we’ve never heard of them before. As a result, the stakes feel manufactured, and the big moments, unearned. The scenes between Wright and Lane/Kinnear crackle but lack any real tension, especially when compared to the electricity she shared with Spacey. The presence of American Horror Story: Apocalypse‘s Cody Fern as Annette’s arrogant, ambitious son is supposed to add an extra layer of drama, but he feels completely extraneous. (Rumor has it, much of his story was initially tied to Frank, which explains why Fern is left mostly twisting in the wind.)

The most engrossing scenes are the ones involving Claire and Frank’s right-hand man, Doug (Michael Kelly). Their cat-and-mouse game feels fresh and new and is probably something we would not have witnessed, had Frank survived. There are also some genuine surprises (one involving the “return” of a deceased character) and a fair amount of suspense, even when the plot doesn’t quite track. The return of Constance Zimmer’s dogged reporter Janine Skorsky is a highlight. Despite getting pushed down a flight of stairs last season by Frank, Jayne Atkinson’s Cathy Durant is thankfully back, too, to provide some much-needed (and perhaps unintentional) comic relief. And Episode 5 ends on a provocative note that portends an exciting race to the finish line in the final three episodes.

THE TVLINE BOTTOM LINE: House of Cards Season 6 is a bit of a mess, but it’s an entertaining mess. And after investing five seasons in this show, it’s one I’m happy exists.