Psst — can you keep a secret? Yeah, me, neither. So the following recap of Sunday’s episode of The Walking Dead includes two big reveals, one even more surprising than the other, and details the turn of events that seems destined to bring crashing down Rick’s bridge over troubled water. Now that you’ve been forewarned, do you still want to proceed? Read on, then. 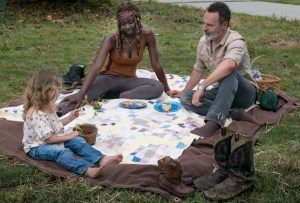 ‘THANK YOU… FOR YOU’ | After “Warning Signs” began with a zombified Justin rising to join the ranks of the undead, we flashed to the morning after, at which point Rick got up early to leave a fresh-picked tomato fit for the cover of Bon Appetit at what I assume was Carl’s grave (not that Carl could possibly appreciate its magnificence — that was one hot tomato). Upon returning home, Rick thanked Michonne for all of her hard work on the charter and beyond, then, with a twinkle in his eye, asked her to put aside that work. “You want me to stop creating the foundations of a new civilization?” she asked. “I can think of another way to build for the future,” he replied. Yup, they were gonna try to get pregnant. Which, honestly, seemed like a pretty bad idea, considering that at that moment, Maggie and her delivery of food were being held up by Jed and a bunch of hostile Saviors who were out looking for Justin — aaand thinking that maybe “the widow” was behind the string of recent disappearances. Jed even went so far as to steal a tomato. (And seriously, special props to the show’s tomato stylist — those things are gorgeous!) Only moments after the situation was defused by Laura, who I never dreamed I’d kinda like, Maggie spotted down the road — what are the odds? — the walkerized Justin!

Back in Alexandria, all hell was breaking loose. In other words, Rick Grimes was on all fours playing horsey-race down the hallway with Judith as a part of the family fun day that he and Michonne had to promise the moppet to get her to see Siddiq about her cough. Alas, the trio had just begun the reading-The-Wizard-of-Oz portion of their day when word reached Rick that Justin wasn’t just dead, he’d been murdered. Quicker than you could say “panic,” the Saviors at base camp for the bridge project were looking ready to riot. First Alden, then Carol tried to break it up, but that was easier said than done. Jed, clearly Season 9’s answer to Jared, up and dared her to just shoot him already rather than make him wait to get it in the back. In no time, fingers were being pointed at likely suspects. Daryl, for one. “Garbage lady,” for another. For a second, it looked like the Saviors were willing to go through Gabriel to attack Anne. Luckily, that was when Rick rode in to lay down the law. As soon as the crowd dispersed, Rick questioned Gabriel, who insisted that he’d been with his new lover for the duration of the previous evening. 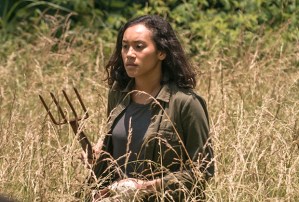 ‘I LIED TO HIM… FOR YOU’ | Next, Rick was approached by Alden, who suggested that, if at least a few key Saviors had guns, they wouldn’t be so scared. No dice, so Alden turned to Maggie. “You trust me, don’t you?” he asked. “How about trusting a few other people who’ve made a change?” Ultimately, Rick agreed to think about it — after he solved Justin’s murder. Which, given how much like an arrow wound the deceased’s chest injury looked, he might have already done. “Go ahead,” said Daryl when Rick sidled up for an uncomfortable interrogation. “Ask.” When Rick did just that, Daryl said that he could prove that he was innocent — because “if I’d-a killed him, I’d-a killed him in plain sight.” Again, Rick made his sales pitch, arguing that the future belonged to all of them now. Not Glenn, Daryl pointed out. Not Abraham or Sasha. Cornered, Rick admitted that he’d wanted to slaughter the Saviors, too. “But killing each other when the world already belongs to the dead, it’s not the way, not anymore.” Furthermore, if Daryl would try — just try — to play nice, maybe people could see what was possible. It might even turn out to be one of the best decisions he’d made since “not killing a guy who left your brother on a rooftop to die.”

Meanwhile, Gabriel, feeling conflicted about lying to Rick about being with Anne all night, asked his girlfriend if she’d seen anything when they were apart. “You think I’m hiding something?” she replied. And his silence spoke as large a volume as her answering a question with a question. While that romance was hitting a rough patch, Maggie and Cyndie were among the pairs out looking for walkers in the woods (lest anyone besides Aaron lose an arm to a sneak attack). When they spotted a couple of zombies loitering around, Cyndie revealed that there was a house nearby — she knew because her family had lived in the area before Oceanside — and suggested that maybe the walkers were being drawn to it. Lo and behold, a bunch of the undead were trapped in the residence, and their argh-ing was attracting more of their kind. There wasn’t a whole lot to this, aside from it giving Daryl and Cyndie another chance to bond when he arrived suddenly and saved her from walkers who broke out of the house faster than expected. The real point of the side jaunt was that Daryl’s rescue party shouldn’t have arrived before Bea and Arat’s. (If you could remember who Bea was at this point, good on you!) 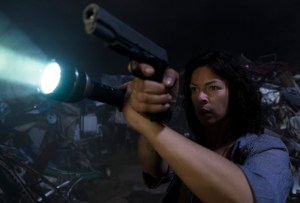 ‘I JUST WANTED TO END IT BEFORE IT BEGINS’ | Soon, the search party found Bea knocked out but not Arat. Did everybody notice that Bea’s weapon looked like it could have made the same kind of hole in Justin as an arrow? Daryl certainly did. Anyway, since the Savior’s gear was left behind, Maggie deduced that whoever had whacked Bea now had Arat. At a subsequent bigwigs’ powwow, Carol reported that the Saviors thought that Arat was on watch overnight. If the main characters didn’t find her by dawn, Rick would lose his worker bees, and the unfinished bridge would come tumbling down when the waters rose again. Before they set off to look for the missing person, Jerry had an important question: When they found the guilty party, who’d decide their fate? And what about the punishment? “Is it gonna be a Gregory or a Negan?” Later, searching the woods with Rick, Carol admitted that she’d badly wanted to shoot Jed. What’s more, she was sure that the disaster they’d narrowly averted that day wasn’t going to stay, you know, averted. In response, Rick confessed that there was a point in every day when he just wanted to go finish off Negan. “But then I remember everyone we’ve lost… and I know I need to honor them — to build life, not take it, because it’s us or the dead, and every life counts now.”

Searching for Arat with Daryl, Maggie wished that she could see things Rick’s way. She even acknowledged that “what [he’s] doing is right for the future. It’s better for Hershel.” Just then, they found another Savior who’d been offed like Justin, and Columbo — sorry, I mean Daryl — announced, “I know who took Arat.” While the twosome set off like a post-apocalyptic Hardy Boy and Nancy Drew, Anne snuck back to the Heaps. There, she took out a hidden radio and, having spotted the chopper the night before, made a call. “What do you have, an A or a B?” asked the man who replied. “I paid my share,” she insisted. But when it became apparent that that wasn’t going to get her what she wanted — presumably, a ride out of danger? — she asked what it would take. “An A,” the guy answered (and suddenly, I remembered that, when Jadis had held Rick hostage, it had been in a container marked A). No sooner had Anne said she’d have an A tomorrow than Gabriel appeared and demanded the truth. Turned out, she’d been trading people for supplies for the Scavengers. That was what she’d been going to do with Rick and Gabriel. Now, given her spot at the top of the murder-suspects list, she was giving up on the new leaf she’d turned over and wanted out. “There’s another place that’s far from here,” she said, “but if we go together, we can get there.”

‘IT’S OVER’ | Though Gabriel took Anne’s hand, he couldn’t agree to her terms: Don’t tell anyone, and help her with “one small part of the deal.” He’d have to tell Rick. “And all this time,” she said, “I thought you were a B.” With that, she knocked him out. As if trying to have an even worse night than Gabriel, Carol got herself grabbed in the woods by Jed, who held a knife to her throat and threatened to Ginsu her if Rick didn’t hand over his gun. See, the Saviors are “vamoosing out of your little pet project,” he explained, and they needed protection for the trip home. “You do this, there’s no going back,” Rick warned. Trouble was, there had been no going back for Jed and the Saviors once they’d lost Justin (who must have been much more delightful at the Sanctuary than he ever was outside of it). As will happen when a fool threatens Carol, she turned the tables, stabbing Jed with her own knife. “Why not just take me out?” he cried, defeated. “‘Cause every life counts,” Carol spat as if the words left an aftertaste in her mouth.

Finally, Maggie escorted Daryl to the place where Cyndie’d once lived. There, they found Cyndie, Bea and another Oceansider menacing Arat — not without cause. The Saviors had murdered Cyndie’s mother, her 11-year-old brother, Bea’s husband, countless others. “We’ve all done things,” Arat protested. After the war, Cyndie continued, she and her fellow Oceansiders had gone along with Rick’s plan for unification because they didn’t think they had a choice. Then Maggie had hung Gregory. “You showed us the way,” Cyndie told the Hilltop’s leader. “It was time.” For a moment, it appeared that Maggie and Daryl might intervene on Arat’s behalf. Then, Cyndie recalled how Arat had smiled when killing her kid brother. And what was it that the Savior had said? “No exceptions.” So Maggie and Daryl turned and walked away, leaving Arat to be murdered while screaming that she’d changed. The following day, as the Saviors all left behind the bridge project, Maggie told Daryl that Cyndie had shown her the way, too. “We gave Rick’s way a chance,” she said. “It’s time to see Negan.”

So, what did you think of “Warning Signs”? Did you guess who was killing the Saviors? Do you suspect that the people Anne’s trading with are using her victims as lab rats in hopes of curing zombie-ism? Hit the comments.