Warning: The following contains spoilers from Sunday’s episode of The Walking Dead. If you’d prefer to be surprised, watch first, read later.

Sunday’s episode of The Walking Dead reminded Rick that new beginnings don’t come cheap. In fact, the one that he was trying to pull off for the sake of the blended communities cost… well, not an arm and a leg but an arm, at least. And, at the end of the day, he couldn’t be entirely sure whether he was really working toward his lofty goal… or Negan’s nefarious one. “You’re not saving the world,” the Saviors’ former leader suggested when Rick stopped by his cell. “You’re just getting it ready for me.” And certain disturbing goings-on in “The Bridge” gave the unsettling feeling that the baddie might be right. What were they? Read on… 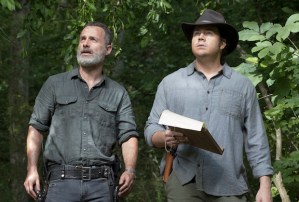 ‘IT’S BEEN A WHILE SINCE WE HAD ONE OF THESE TALKS’ | Since Rick’s chat with Negan bookended the episode, the hour began with our hero on the offensive, pouring salt in his nemesis’ wound by prattling on about how awesome everything was going on Day 35. And things certainly looked sweet: Jerry and Nabila had coupled up; Carol, Ezekiel and Cousin Oliver Henry had formed the cutest family unit this side of The Brady Bunch; Rosita and Arat managed to detonate a bomb without going nuclear on one another; and the deadliest injury that Siddiq and his star med student Enid had to handle was a cut that Cyndie got while peeling a potato (the lesser-known danger of the post-apocalyptic world!). Apparently, Carl’s former girlfriend was quite a prodigy, too; Rick was fine with her being left in charge of the infirmary at HQ when Siddiq returned to Alexandria to treat a bug. Wait — there were a total of zero adults who might’ve been better suited to provide level-headed healthcare? Mmkay.

Besides Doogie Howser being put in charge of first aid, there were a couple of other little problems bubbling beneath the surface. As Eugene reported to Rick, half a dozen Saviors had walked off the bridge-reconstruction project in the last month, and Alexandria had been stretched “wafer-slim” rations-wise. Not to worry, Rick said. Michonne was on the case and, in fact, at that very moment was arriving at the Hilltop. Unfortunately, since the ethanol that the Sanctuary had been supposed to send — and claimed to have sent — hadn’t arrived, Maggie refused to fork over any food. Her reasoning: She needed the fuel to power the plow to harvest the big fields (or else the Hilltop would need its surpluses). And she couldn’t use the manual plow, she reminded Michonne, since it was broken and her blacksmith was behind bars for her attempted murder. That being the case, Michonne was struck anew by what a good idea it would be to have some rules of conduct set down. (Might I suggest that Rule No. 1 be, “Thou shalt not attempt to murder Maggie”?) 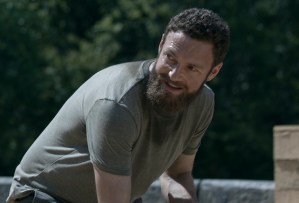 ‘YOU’RE NOT MY BABYSITTER ANYMORE!’ | Working with Daryl on the bridge, Aaron told a typical parent story about his experience caring for baby Grace and suggested that his grumbly pal would make a great father himself someday. Nearby, Henry took his job as water boy seriously enough that when a Savior named Justin refused to accept his allotted sip, he knocked the bruiser on his ass with his stick. (Morgan 101.) The thug was about to retaliate when Daryl intervened, and by the time Rick happened upon the scene, the guys, as well as Aaron and Savior Jed, were caught up in a full-on brawl. Later, when Daryl expressed his disbelief that Justin was getting a pass after his behavior, Rick assured him that eventually, the Saviors would see that they were all on the same side now. “Are we, though?” asked Daryl in a way that made it clear he was answering the question rather than asking it. After he stormed off, Carol advised Rick to speak to Daryl and consider that maybe, just maybe, not everyone was super-ready for his utopian plan.

Meanwhile, at the Hilltop, Michonne overheard Tammy Rose demanding to see Earl (whom she apparently hadn’t been allowed to visit since his arrest), then made a beeline for Jesus to inquire whether he agreed with Maggie’s hardline decision-making. “I don’t know if she hanged Gregory for everyone, for herself or both,” he admitted, “but I’m not against a grieving mother seeing her husband.” In that case, he should talk to Maggie, Michonne urged. Back at HQ, Anne finished sketching a woman for Gabriel — a “half-blind art critic,” in his own estimation — and thanked him for making her feel like one of the group. The preacher had been in her shoes once, he recalled. Then Rick had reached out to him. “He’s good like that.” In response, the erstwhile Jadis stroked Gabriel’s hand and said sweetly, “He’s not the only one.” Back at the Hilltop, Jesus found that Maggie had been rereading Georgie’s letters and asked if she’d be joining her. Nah, Maggie replied. “I like her ideas but not that much.” Then Jesus got to the real point of his drop-in… 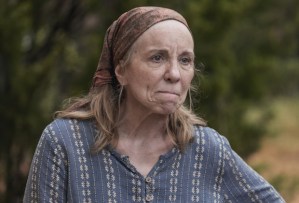 ‘WHY DID YOU HANG GREGORY AND NOT ME?’ | After Jesus suggested to Maggie that some decisions — like her isolation of Earl — were too big for one person to make, she relented and let Tammy Rose visit her husband. Later, Maggie returned to his cell alone and asked him to open up about his drinking problem. After he had, she was about to leave when he asked why Gregory had been executed when “what I did to you was in me,” Earl said. “Gregory didn’t make me do anything.” Did he think she’d made a mistake? “No,” Earl said. “Good,” Maggie replied. Over at Project Building Bridges, Jerry cranked a siren to draw the walkers who’d been attracted to Rosita and Arat’s noisy explosion. A second siren was supposed to divert them again. While Rick — aka “Mother Goose,” per Tara — was giving orders over the walkie-talkie, Alden tried to explain that none of the Saviors who’d quit building the bridge had ever made it home to the Sanctuary. What’s more, since the Saviors’ guns had been taken away, they were scared. And he couldn’t help but point out who Rick sounded like when he said he’d protect the Saviors.

Since the second siren never sounded, that herd of hungry walkers ran right into the crew that Daryl and Aaron were working on. Panicking, Jed let go of a rope that was helping keep a felled tree from crashing down from a stack of lumber, and Aaron’s arm got trapped underneath. In no time, reinforcements arrived to do some fairly epic walker-slashing. Ultimately, Rick dispatched the bulk of the herd by shooting a rope that held back a pile of lumber, sending timber tumbling down on the zombies. Alas, he was too late to save Aaron’s arm. Back at HQ, Enid — Enid! — declared that she’d have to amputate. And, without giving her patient so much as a shot of whiskey, she did! Afterwards, Daryl, a bloodthirsty look in his eyes, pummeled Justin, who’d been supposed to sound the second siren. The walkie-talkie had been dead, the Savior said. But it didn’t matter to Daryl, who might’ve killed the guy had Carol not stopped him. “We’ll deal with it,” she said, “but not like this.” Hmmph, Daryl didn’t have to say. “There’s only one way to deal with these a–holes.” 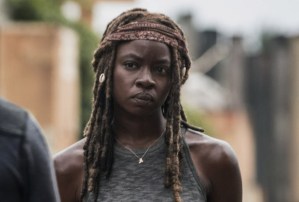 ‘YOU NEED TO KEEP YOUR DOG ON HIS LEASH’ | Off her conversation with Earl, Maggie told Michonne, “We can talk about common laws, but I’m not giving up the right to do what I think’s best for my people.” Hershel’s mom was also going to set her blacksmith free to work under supervision for a while, so Michonne could have the rations that were so badly needed. What had changed since the last time they spoke? Michonne asked. Maggie’d heard Earl’s story, and it had reminded her of her father. “He was a good man,” she said. “If he hadnt-a been given a second chance, a lotta people would’ve been worse off for it.” Which set him and Earl both apart from Gregory, who wasted all of his chances. So “I don’t regret what I did” to that weasel, Maggie insisted. “Some people can be redeemed… but others can’t.” When asked who makes the call, she replied, “I guess that’s one of the things we’ll have to figure out.” That night at HQ, Justin had the balls to get in Rick’s face, suggesting that “that bitch of yours nearly killed me over nothin’.” It didn’t go quite the way Justin might have imagined it would.

In response, Rick said that, having been a cop, he was well-acquainted with Justin’s kind — the sort who makes trouble, then looks for someone else to blame. Well, as of that moment, Rick was done giving the Savior the benefit of the doubt; he was to pack up and get lost. If Rick ever saw him again, “Stitches won’t fix what I do to you,” he warned. Off that confrontation, Rick visited Aaron. Though he was expected to recover, Rick felt terribly guilty. Don’t, Aaron said. When the dead had risen, Aaron had believed it was the end of everything. “You changed all that, Rick. It’s not the end of the world anymore, it’s the start a whole new one.” As such, he was just glad to lend a hand — literally just one now. Nearby, Anne distracted Gabriel from his watch — wait, the half-blind guy was on watch duty?!? — by asking about the woman she’d sketched for him. She’d been his organist, the preacher confessed. He’d cared for her but had been too afraid to act on his feelings. Upon learning that he was Episcopalian and therefore needn’t be celibate, Anne asked if fear was what was holding him back now. Perhaps realizing that there was no reason not to act on his new attraction, he kissed her (and soon let her unbuckle his belt — apparently, the frogs weren’t the only ones getting lucky out there!).

‘WE’RE THRIVING WITHOUT YOU’ | Sitting around the campfire with all of their friends, Carol asked Ezekiel if he was still carrying around that engagement ring. She wasn’t saying yes, she’d marry him, mind you. “I just thought I’d try it on for a while.” And God, no, she didn’t want him to get down on one knee. “But I wrote a speech,” the king protested. “I’m sure you did,” she replied, “and you can read it to me later.” At the same time, Rick was visiting Negan (in other words, this was the point in the timeline that their talk actually occurred). “It was a hard day,” Rick admitted. “People were at each other’s throats… [But] when the day was done, they came together. Not all of ’em. But enough.” From the darkness of the cell, you could almost hear Negan licking his chops. “That’s a real pretty picture you paint there,” he said. “When do I get to see it?” Never, Rick replied. “You’re gonna die behind these bars.” In response, Negan laughed at the idea of Rick building a future — for whom? Carl? Nah, “that bridge, it’s not the future,” the villain said. “It’s a monument to the dead.”

As the episode drew to a close, Anne, post-tryst with Gabriel, seemed to think that she heard the chopper she’d been waiting for all the way back in Season 8, and Justin, on his way out of Dodge, was spooked by the sudden appearance of an unseen someone. “You damn near got yourself killed,” he said… just before he was attacked. So, what did you think of “The Bridge”? Do you suspect that Maggie eventually will go away to work with Georgie? Do you think Daryl attacked Justin? Hit the comments.