There’s a whole slew of How to Get Away With Murder characters who are weighed down with daddy issues. Asher? Yep. Laurel? For sure. Bonnie? Yes, yes, a thousand times yes.

But on Thursday’s episode of the ABC drama, it was Nate’s dad who became everyone’s issue, as Annalise and her clinic students began their fight to get Nate Lahey, Sr.’s conviction overturned. And that wasn’t the only family drama included in the hour — because, well, is it ever?

Let’s recap what went down in Episode 4:

PAPA, CAN YOU HEAR ME? | Annalise plans to use an insanity defense when Nate Sr.’s case goes to trial, but there’s an important hurdle to clear before she can get there: She and her students must write a compelling motion to the judge, convincing her that Nate Sr. didn’t know the difference between right and wrong when he murdered his fellow prison inmate. The students are tasked with wading through 30 years’ worth of prison records in order to prove that Nate Sr. was clinically insane at the time of the crime — and yet, even after they dig up all of the appropriate records that could indicate the man was insane, Nate Sr.’s motion ends up resting on one very important question: After he killed the inmate, did Nate Sr. ask the guards for a piece of chocolate cake?

This might all sound very Matilda, but his answer is crucial. If he did ask for the cake, then he clearly couldn’t tell that the murder he’d just committed was wrong. If he didn’t ask for it? Then he was lucid enough to understand the gravity of his crime, and an insanity defense likely won’t fly with the judge. Nate Sr. remembers very distinctly that he did not want a piece of cake after the murder — after all, how could he, when a man’s brains were splattered all over the floor? — but Annalise reminds him that an overturned conviction could legitimately rest on his answer to this sole question. 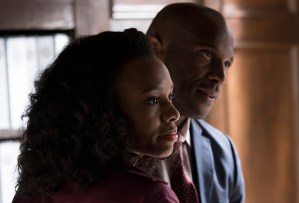 Later, at his psychiatric evaluation, Nate Sr. recounts all of the gory details from the day he killed that inmate, and he seems so traumatized by the event that you can practically see his stomach turning. But when the psychiatrist asks the Very Important Question — “Did you know what you had done was wrong?” — Nate Sr. comes through with the correct answer: “I just remember I wanted a slice of cake.” Thanks to his white lie, and a strong written argument from Annalise’s students, the motion passes, and Nate Sr.’s case is officially set for trial.

SISTER, SISTER | After learning all of Nate’s new intel on Bonnie and her potential child, Annalise is annoyed that Nate went down this investigative path. “You don’t have a right to mess with someone else’s trauma,” she tells him, despite his pleas for Annalise to break the news to Bonnie that her baby might still be alive.

Meanwhile, Nate tracks down Bonnie’s sister, Julie — decidedly not an identical twin — and watches as she scolds a young man who is doing drugs in his car. The boy, who seems to live with Julie, is about the same age as Bonnie’s child would be by now, and Nate swipes a dirty needle from the boy’s car in order for quasi-girlfriend Theresa to run a DNA test on it. (Theresa, fed up with Nate using her for his detective work, later breaks things off with him.)

The DNA results are ultimately not a match; whoever that boy at Julie’s house is, he isn’t Bonnie’s child. After Annalise gets this news from Nate, she finally decides to reveal everything to Bonnie; she tells her that Nate has been hanging on to Denver’s file on her, that her sister stole her child from the hospital, that the boy doing drugs in his car is not Bonnie’s son. And Bonnie — as if you could possibly blame her — breaks down after hearing this information, feeling particularly gutted that Nate lied to her about destroying Denver’s files. She sobs in Annalise’s arms, and Annalise tells her that she’ll support whatever decision Bonnie wants to make: Find her baby, or leave it be, once and for all. 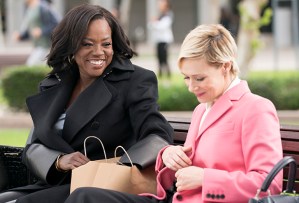 * Ronald Miller is officially named the interim district attorney, and he wants to celebrate by making his relationship with Bonnie official, via a human resources form. Bonnie hems and haws about signing the paperwork, unsure if she wants to go through with it. But after some reassurance from Annalise that dating the D.A. won’t change how people see her, Bonnie happily adds her signature to the sheet — and she would have returned it to Ronald, if she hadn’t been interrupted by the massive, life-changing news from Annalise that her child might still be alive.

Oh, and there’s another new wrinkle in the Ronald/Bonnie (Ronnie?) relationship: Asher. He pays a visit to Bonnie halfway through the episode, confessing that he feels lonely now that he’s excluded from Annalise’s clinic and the house where all of his friends live. He admits to Bonnie that he misses her, too, and wonders if they might still be together right now, had he made a few different choices in the past.

* When Oliver confronts Frank about why he’s spying on Gabriel Maddox, Frank smoothly covers his own booty by saying that he does background checks on all of Annalise’s students, including the ones working at her clinic. Oliver’s interest is piqued, and he does some of his own digging on Gabriel. At first, he’s alarmed by Gabriel’s previous arrest for felony assault (for which the charges were dropped), but he later discovers that the man Gabriel beat up was the doctor who overprescribed the pills on which Gabriel’s mom was hooked. So, good intentions, right?

Connor, meanwhile, gets increasingly curious as to why Annalise included him in the original Keating Five. She hired Laurel because of Laurel’s shady father, she hired Asher because of his shady father, she hired Wes because of her own guilt… but why Connor? He later confronts Annalise with this very question — after learning that she did make a call to President Hargrove in order to get Connor re-accepted to Middleton — but Annalise has no time for his interrogation. She (loudly) reprimands him for bringing his “bitch boy” problems to her doorstep once again (“You want me to save the world and be nice, but that’s not me!”), then rescinds her offer to make Connor second chair at Nate Sr.’s trial, bestowing that honor upon Gabriel instead.

* Caplan & Gold begins representing Ruth Stevenson, the culturally and politically tone-deaf CEO of the Ruthie’s Burgers restaurant chain. Michaela, still desperate for Tegan Price to like her again, suggests an alternate legal strategy for Ruth, and she even pulls an all-nighter to craft an approach that will impress Tegan — only for Tegan to toss all of Michaela’s paperwork right into the trash.

But there is a bright side: Tegan reveals that she was testing Michaela; she never had any intention of using Michaela’s legal strategy for Ruth, but merely wanted to see if Michaela could do the intense grunt work that lawyers so often need to do for their clients. Michaela passed the test, and Tegan reveals, “Yesterday, I hated you a 10. Today, you’re an eight!” And that’s good enough for Michaela, who grins to herself as the Caplan & Gold elevator doors close.

* In the flash-forward, which is now only a month-and-a-half away, Connor asks Michaela where Oliver is, and Michaela suggests that they call Oliver’s cell phone to locate him. But when Connor walks away, Michaela actually dials Nate‘s number… and Nate’s cell phone rings in Bonnie’s dress pocket.

Meanwhile, Annalise — who we already know got some devastating news from Frank at the wedding reception — returns home and immediately falls to the floor, where she begins sobbing.

OK, your turn. Your thoughts on Thursday’s episode of Murder? Drop ’em in a comment below.