Thursday’s episode of How to Get Away With Murder was all about loopholes — literal and figurative.

I have to assume that someone in the Murder writers’ room has a fascination with O.J. Simpson’s trial (or, at the very least, really loved Season 1 of American Crime Story), as the ABC drama gave a nod to Simpson’s court proceedings in its latest installment. Only this time, it wasn’t a glove that needed to fit the defendant; it was a belt.

Let’s recap what went down in the third hour of Season 5:

CASE OF THE WEEK | As Emmett Crawford demanded in last week’s episode, Annalise joins the defense team for Niles Harrington, a big-shot CEO who is on trial for murdering his business partner, Andrew. Niles doesn’t seem to have a likable bone in his body, really. The jury seems to write him off as a killer from the start, thanks to his book, The Psychopath CEO, and the way he speaks to women like Annalise and Tegan (“Put on some heels and land a man.”) is just gross.

For much of the episode, the case seems like an impossible win for Annalise — and that really wouldn’t be good for Caplan & Gold, considering that Niles plans to move all of his legal accounts to the floundering law firm if they get him exonerated. But thanks to Oliver’s fantastic hacking skills, he finds a damning email that Niles’ wife, Bethany, sent to Niles’ deceased business partner from her private email account. As it turns out, Bethany and Andrew were having an affair, which seems like the perfect reason for Niles to kill his partner. But when Annalise and Emmett confront Niles with this information, Niles instead reveals that it was Bethany who killed Andrew, not him. Sometime during the affair, Andrew had revealed to Bethany that he planned to leave his and Niles’ company, and Bethany ultimately killed him because she knew his departure would be terrible for her and Niles. (If you got lost somewhere in there, don’t worry. What really matters is that Bethany killed the dude by strangling him with her belt.)

But Niles refuses to let his wife get locked up (…for something she did…), so Annalise and Emmett come up with a different, last-minute strategy. During her final day of questioning witnesses, Annalise — now knowing that the murder weapon was a woman’s belt, not a man’s — asks Niles’ wishy-washy secretary, Doris, to try on the belt that killed Andrew. The prosecution demands that Niles must try it on, too, and he does. The result? The belt is much too small for Niles’ waist, but it fits Doris like a… well, you know.

Still, the courtroom fashion show isn’t enough to convince the jury that Niles is innocent. They find him guilty of murdering Andrew anyway, much to Annalise and Emmett’s disappointment, and Niles brushes off their suggestions that he sell out his wife and tell the truth about Andrew’s murder. “You’ve never known love,” Niles rudely and incorrectly tells Annalise before he’s taken away. Gee, what a gem, huh? (But there is a bright spot in this mess, at least for Oliver: He’s hired to do IT work at Caplan & Gold full-time, which means he and Connor will soon be able to afford an actual wedding.) 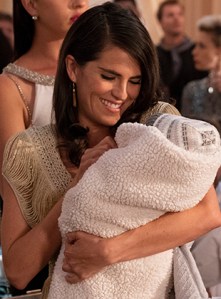 * After unearthing the security camera footage that appears to show a young Bonnie stealing her own child from the hospital, Nate does some more digging into the kidnapping. He interviews Eileen Colterman, who worked as a nurse at the hospital and was on duty when the child was abducted. At first, she lies to Nate that she doesn’t remember much about that night — only that the nursing staff blamed her for the kidnapping because it happened during her shift.

But when Nate discovers that Eileen is battling Stage 4 breast cancer, he returns to her house and questions her again, this time urging her to clear her conscience (especially when some would argue that her guilt may have caused her cancer). She tearfully caves to Nate’s questioning, revealing that a man claiming to be the baby’s grandfather — Bonnie’s garbage-human dad, presumably — had come to the hospital and said that the baby’s mother had panicked after giving birth and gave him up, but now wanted him back. Nate shows Eileen a headshot of young Bonnie, asking if that was the woman who stole the baby… and she says yes.

But when Nate goes to Annalise to reveal all of this information, Annalise drops a bombshell of her own. Sure, it may be true that Bonnie’s infant son had never died, despite what her dad told her. And it may be true that a woman who looked like Bonnie came to steal the baby from the hospital. But upon seeing the grainy photo of Bonnie at the hospital, Annalise reveals that the woman isn’t Bonnie: “This is her sister.”

* Ronald is upset to learn that Asher and Bonnie previously slept together, prompting a fight between him and “Summer Top” when he says he deserved to know the truth. Bonnie seems content to cut Ronald out of her romantic life at the first sign of trouble; after all, that would stop him from learning about her horrific upbringing, right? But Annalise gently reminds Bonnie that “pushing people away will only result in what you say you don’t want,” and the pair makes up before the hour is over. (And Asher gets hired full-time at the D.A.’s office! It’s a win for everybody.)

* During the prep for his murder trial, Niles lets slip something intriguing about Emmett, which seems to indicate he did something very bad while he was working in London. “I heard misconduct,” Tegan dishes to Annalise later, but when Annalise asks if the behavior was sexual, Tegan says she doesn’t know.

* Frank continues spying on Gabriel Maddox via the cameras he set up in the kid’s apartment. When Gabriel is out of the apartment one afternoon, Frank breaks in and goes through a duffel bag that Gabriel keeps stashed away. Inside, he finds a wad of cash, an Illinois state ID with the name “Mark Jackson” instead of “Gabriel Maddox,” and an external hard drive that piques Frank’s interest. Later, with the help of a hacker friend that we’re meeting for the first time, Frank sets up his computer so that he can see whatever Gabriel is looking at on his computer — without Gabriel ever having to know he’s being monitored.

But there’s one person who does catch on to the plan Frank is hatching: Oliver. He notices that Gabriel uses a flip phone — the exact kind that Frank had asked him to clone in last week’s episode.

* In the flash-forward to Connor and Oliver’s wedding, Bonnie lies to Michaela that the blood on her ankle is her own; she merely cut herself shaving earlier that day, OK? But when the women return to the reception, Connor and Oliver are called to the dance floor for the “boy-quet” toss, and it’s revealed that Connor’s face is bruised and beaten up, seemingly from an unknown event that must have taken place days before the wedding.

Even more worrying? Oliver is nowhere to be found, despite the wedding DJ’s many calls for the groom to join his husband on the dance floor. Michaela catches Bonnie’s eye from across the room and stares at her, horrified.

OK, your turn. What did you think of Thursday’s Murder episode? Any new theories on who Bonnie killed in the snow? Drop ’em all in the comments below!