In the second installment of its fifth season, How to Get Away With Murder really lived up to its title. In fact, at least three of Thursday’s plotlines involved characters who were trying to get away with ending someone else’s life.

The case of the week? Murder. The ominous flash-forward to Connor and Oliver’s wedding? Yep, more murder. The ongoing Gabriel Maddox mystery? Well, OK — I’m not entirely sure that Frank is actually trying to kill Gabriel, so we’ll give this one a half-point. But he is up to something shady, as evidenced by the master plan he put in motion in Thursday’s episode.

Let’s recap what went down in the hour:

MURDER, HE WROTE | Now that her legal clinic is fully operational, Annalise takes on her class-action lawsuit’s first appeal. She and the students will be defending Nanda Hashim, a Muslim immigrant who was accused of murdering her wife by way of vehicular manslaughter and ultimately took a plea deal. Much to Annalise’s chagrin, Michaela is the clinic participant to come up with the best defense strategy for Nanda: Since Nanda clearly wrote her appeal from prison, her public defender must not have informed her that a plea deal is permanent; once you’re behind bars, you can’t change your mind and ask to have it undone.

Despite Michaela’s fiery questioning of Nanda’s public defender, the first hearing goes poorly. The public defender blows up at Annalise, telling her she’s rather arrogant if she thinks she can fix an unjust legal system. What’s more, he reveals that Nanda is actually a heterosexual woman, and her marriage to Ali was a sham; Nanda was a widow who only married Ali because she needed a Green Card at the time. Nanda later admits to Annalise and Michaela that she did marry Ali for immigration purposes, but over time, they genuinely fell in love. In fact, Ali even converted to Islam for Nanda, which she wouldn’t have done if she didn’t really love the woman.

Still, Annalise decides to change up her defense strategy. Instead of going after Nanda’s inept public defender, she and her students will investigate Nanda’s stepchildren, who are white; if Annalise can prove that the stepchildren coerced Nanda into taking the plea deal, perhaps she’ll still have a chance at getting the trial to which she’s entitled. Later, upon hacking into Nanda’s stepson’s credit card statements, Oliver discovers that the stepson was making payments to an underground website for alt-right racists — and it’s a pretty fair assumption that he wasn’t a fan of his Muslim stepmother. 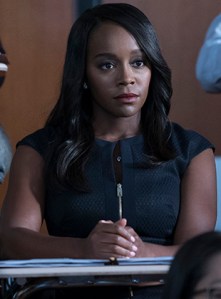 At the next hearing, Annalise gets Nanda’s stepson to take the stand, and he ultimately admits to writing racist forum posts on the alt-right website. Sure, that doesn’t prove he actually killed anyone. But Annalise continues to get under his skin, positing a theory that Nanda’s stepson intended to kill Nanda on her way to the mosque one night, but ended up running over his own mother when he thought it was actually Nanda. The man gets increasingly furious as Annalise talks, then finally says to her through clenched teeth, “You are a stain on this country. Just like her.” And he points directly at Nanda then, which is enough to get her stepson charged with first-degree murder and attempted murder. Nanda, meanwhile, is free to go.

DIAL M FOR MADDOX | After an unsuccessful attempt to clone Gabriel Maddox’s flip phone — meaning he would copy the phone’s identity to his own device — Frank decides to take the scenic route through his plan to foil Gabriel. He ends up seducing and sleeping with Gabriel’s roommate, then offers her stacks of cash if she’ll agree to unceremoniously boot Gabriel from their apartment.

The girl agrees, and Gabriel ends up moving in across the hall from Asher at Wes and Rebecca’s old apartment building. As Frank watches Gabriel via cameras he’s set up in the new apartment, he dials the mystery person once again — who is suspiciously named “The One” in Frank’s phone contacts — and says, “Hey, it’s me. I finally found a way into the kid’s head.”

WEDDING BELL BLUES | In the flash-forward to Connor and Oliver’s nuptials, Bonnie is seen scooping up baby Christopher from the snow and bringing him into the bathroom at the reception. Just as she’s cleaning him up, Michaela bursts in, asking if Bonnie has spoken to Nate recently. Before Bonnie can answer, Laurel also walks in and, blissfully unaware that Bonnie just killed somebody, takes Christopher off Bonnie’s hands and leaves the bathroom.

Michaela, on the other hand, isn’t so easily fooled. After spying some blood on Bonnie’s foot and shoe, she begs Bonnie to tell her whose blood it is — but Bonnie won’t answer. (After all, it’s much too early in the season to be getting any answers.)

* Ronald asks Bonnie — sorry, “Summer Top,” which is the lamest nickname of all time — if he can take her on a proper date, and she declines the offer for fear that someone important will see them together in public. Instead, when they’re chatting in his office later in the episode, Ronald decides to tell Bonnie how he really feels about her: Not only has he noticed all of her little quirks and habits during the last three months, but he really, really likes her face. (Sometimes it’s just that simple, folks!)

They end up sleeping together in Ronald’s office, which Bonnie later reveals to Annalise… and Annalise has the exact reaction Bonnie suspected she would have. (That is to say, she’s not pleased.) Annalise comes down on her for being careless and always going for men she can’t have. After all, what if Ronald has seen the files that Denver was keeping on everybody, and he’s really been playing Bonnie this whole time?

“He’s falling for me!” Bonnie tearfully responds. “That is why I trust him, because if he saw what was in my file, he’d want nothing to do with me.” Annalise, finally understanding the depth of Bonnie’s inner conflict, grabs Bonnie’s hand in apology.

* Asher, having been rejected from Annalise’s clinic, pesters Ronald and Bonnie about getting an internship at the D.A.’s office. They initially brush him off, but when Asher sneaks a peek at Ronald’s speech for the D.A. job, he informs Ronald that the speech makes him look like “Denver’s little bitch boy.” Impressed by Asher’s candor, Ronald hires him on the spot, on a trial basis. “You annoy me, you’re out,” he tells Asher — but knowing Asher’s general Asher-ness, he’s pretty much guaranteed to annoy Ronald immediately. 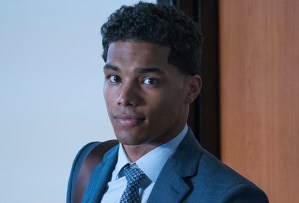 * Nate’s lady friend at the DNA clinic runs a few more tests, and she’s able to identify that the blood sample from Bonnie’s son was taken from the U.S. Organization for Missing Children. It seems her son was abducted shortly after he was born — but in order to get any further files on the baby, Nate needs a signature from the acting district attorney. Which is Ronald Miller. Who is hooking up with Bon-Bon. Great!

Nate, ever the crafty detective, decides to bury the file request form in a stack of other mundane paperwork that he needs Ronald to sign, and he distracts the interim D.A. with conversation about how much Bonnie likes him. The plan goes off without a hitch: Ronald signs the request form without even glancing at it, Nate gets the file he needs, and he learns that the baby boy was abandoned at St. Lincoln Hospital more than 20 years ago, only to be kidnapped two days later by a woman who, judging from the security footage, was Bonnie herself.

* Tegan Price is furious to find that Michaela and Laurel will both be working in the Caplan & Gold offices as part of Annalise’s clinic — so furious, in fact, that she tells Laurel to “never speak to me again.”

In order to get in Tegan’s good graces, Laurel lies to Emmett Crawford that her mother was the one to rat out her father to the authorities regarding the shady Antares situation. (Reminder: It was actually Tegan who did that.) Tegan, clearly picking up what Laurel’s putting down, thanks her by letting baby Christopher attend the daycare that Caplan & Gold provides for its employees.

* After winning her first class-action appeal, Annalise is presented with her first pro bono case for Caplan & Gold, which involves some rich businessman who did a bad rich-guy thing. She initially refuses to take the case, insisting that she needs to focus on helping her class-action defendants — but Emmett later reminds her that she needs to make the firm some money, so she’ll be taking the case whether she wants to or not.

* Though Oliver is still upset with Michaela for what she did to Simon, Connor convinces him that he’s already spent too much time being vindictive. (Case in point: Oliver has intentionally been putting his purple shirts in with Michaela’s laundry, turning all of her clothes a lovely shade of lavender.) At the end of the hour, Oliver apologizes for what he’s been up to and extends an olive branch by asking Michaela to be his and Connor’s second best man at their wedding.

What did you think of Thursday’s Murder? Drop a comment below!