Class is officially back in session for Middleton University’s law students. And the start of a new school year means another grisly incident is right around the corner — at least, that’s how it works on How to Get Away With Murder.

Murder returned for its fifth season on Thursday night, and you wouldn’t be blamed for mistaking the premiere for a Season 1 episode. After all, it had all the elements of the show’s early days, like Annalise announcing a class-wide competition for her students… or, y’know, someone dying at a party.

Before you tell us what you thought of the Season 5 debut, here’s what went down:

GETTING SCHOOLED | Isn’t it amazing what a Supreme Court win can do? Though her reputation was in ruins last season, Annalise’s SCOTUS victory — and the conveniently timed death of District Attorney Denver, who was investigating Annalise & Co. — has earned her a return to the Middleton classroom. This year, she’s teaching a course called Advanced Trial Skills, and just about every law student on campus wants to take it… but Annalise is capping the class at 24 lawyers-to-be. If a student wants in, they have to persuade Annalise by (1) selling her on the No. 1 legal issue that they feel passionate enough about to argue for in court, and (2) convincingly delivering an opposing argument to that same issue the following day.

Among the two dozen students who make the cut: Michaela (who wants to overturn every loitering and trespassing conviction in the country), Laurel (who wants to make a good education accessible to all children), Connor (who wants a universal basic income) and the enigmatic Gabriel Maddox (who wants to abolish the country’s prison system completely). Annalise clearly isn’t sure what to make of Gabriel initially. First, he’s a second-year transfer, and he stayed in the class even though Annalise specifically said that 1L and 2L students didn’t have the chops to survive her clinic. And, even more jarring, he cited the death of Annalise’s husband, Sam, during his in-class, please-let-me-into-your-course speech. And he looked her in the eye when he did it!

Plus, even though Annalise doesn’t know it yet, Gabriel has a major connection to someone in her world. Throughout the premiere, Frank has multiple phone conversations with the mystery caller from last year’s finale, all of which include vague hints about the Gabriel situation. (“We’re not telling her,” he says during one phone call, then pleads in a later one, “Just give me a second to regroup, figure out what to do, nobody gets hurt.”) 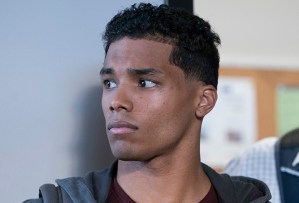 But despite Gabriel’s bravado and 2L status, Annalise is impressed enough by his gumption and anti-prison zeal that she lets him into the clinic. Asher, on the other hand, isn’t so lucky. Despite making a passionate argument on behalf of undocumented immigrants in the U.S. — a cause he became verrrry interested in once Michaela got Simon deported — Asher isn’t able to persuade Annalise that he belongs in the class. (Darn, my Fall TV prediction was wrong.) In fact, Annalise doesn’t even believe that Asher knows his own identity, considering he only picked the immigration topic after Michaela’s call to ICE last semester. All Annalise sees is someone who “people-pleases and plays the clown,” she tells Asher upon his rejection from the clinic. “And that’s not a good look for a lawyer, let alone a man.”

Oh, and in case Annalise’s clinic wasn’t competitive enough, she throws in a little incentive for the 24 students who get accepted: The student with the highest ranking at the end of the semester will get a year’s tuition paid in full. Earlier in the hour, Annalise had signed a contract with good ol’ Caplan & Gold, and she struck up a symbiotic relationship with the law firm: Caplan & Gold will provide funding for her Middleton clinic, considering the university’s resources only go so far, and Annalise will provide pro bono work for the firm, which it desperately needs now that clients are fleeing in the wake of the Jorge Castillo scandal.

That’s how Annalise can afford to offer her clinic students a year’s tuition — and, unsurprisingly, their eyes go wide when they realize what’s at stake this semester. “The money’s mine, bitches,” Michaela tells her classmates, and frankly, I think she could be right.

MAMA DRAMA, PART ONE | You might recall that in last March’s Season 4 finale, Bonnie and her co-worker Ronald Miller — who’s currently acting as the interim D.A. after Denver’s death — connected with each other on a dating app. When the premiere picks up a few months later, they’re still doing some heavy flirting, but Bonnie reveals to Nate that she’s playing Ronald. Now that she knows Denver was keeping files on everyone in Annalise’s circle, she’s convinced that Ronald might know something about the contents of those files, and she wants to keep him close. By the end of the hour, she’s fully persuaded Ronald that it’s OK for him to make a move on her, even if he is technically her boss.

Unbeknownst to Bonnie, though, Nate is the one who currently has Denver’s files, and he hasn’t forgotten about the mysterious “Child alive?” note that Denver left on Bonnie’s paperwork. After spying a lipstick-stained coffee cup in Bonnie’s office one afternoon, Nate swipes it from her desk and brings it to a DNA lab for testing. A few days later, his suspicions are confirmed: Bonnie’s DNA is a maternal match with the tests in Denver’s paperwork. Whoever this child is, it’s a boy, and Bonnie is his mother.

MAMA DRAMA, PART TWO | After leaving us in suspense for six months, Murder finally revealed whether Laurel’s mother, Sandrine, is alive or dead — and it seems she’s alive. Laurel receives a package (with no return address, suspiciously) that contains her baptism gown from when she was a baby, which Sandrine is clearly sending so that Laurel’s son can wear it at his ceremony. “That means you didn’t kill her, then, so… good news all around!” Asher says. Later, Frank asks Laurel if she’s happy to hear her mom is still kicking, and she says she just wants Sandrine to stay away from her and her baby. (Also, it’s still not clear where those scratches on Laurel’s arms came from, but they should be gone after a couple of months, no?)

Speaking of Frank and Laurel, Michaela spills the beans that they’re sleeping together again, and Laurel says she feels guilty about it. Not only are they having sex, but Frank is helping out quite a bit with baby Christopher, and Laurel feels like she’s using him for his “manny” services. But when she confesses that guilt to Frank, he rejects the idea that Laurel is stringing him along — and, as a matter of fact, he wouldn’t mind if they were tethered together for life. “Marry me,” Frank says, getting down on one knee and presenting Laurel with a ring. Then, when she doesn’t respond: “I said, marry me, dammit.” Laurel looks tempted to accept his proposal, but she ultimately sighs and tells him, “I can’t. I’m sorry.” (It doesn’t stop her from asking Frank to be Christopher’s godfather, though, which Oliver points out is a little mean.) 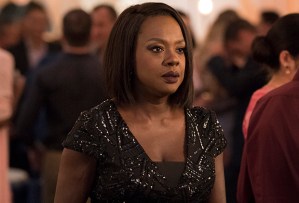 BACK TO THE FUTURE | As is Murder tradition, the premiere ends — and begins, actually! — with a flash-forward. We’re offered a glimpse of Connor and Oliver’s wedding, three months in the future. Everyone is having a ball, including Annalise, who’s in the middle of getting down on the dance floor… when she spies Frank looking somber in the corner of the room. “Why do you look like someone just died?” she asks him. He doesn’t answer, prompting her to warn, “Frank, open your damn mouth.” He still doesn’t, and she slaps him across the face.

Outside, not far from the wedding venue, someone is walking in the snow and bleeding profusely. The camera angle here comes from a first-person perspective, so we don’t know who it is, but he or she collapses on the ground, gasping for air. Just when it seems the victim is starting to fade — with a baby that looks like Laurel’s son crying on the ground a few feet away — Bonnie approaches the person, looks at them regretfully, then closes their eyes and puts her hand around their throat, choking them.

Other premiere developments of note:

* After her split from Asher, Michaela is putting all of her eggs in the Marcus-from-Scandal basket. She hasn’t heard from him all summer, so she leaves him an awkward voicemail to officially let him know she’s interested… and he rebuffs her advances. “Sorry, but I can’t see anyone right now,” Marcus responds via text, and Michaela buries her heartbreak by saying his rejection is a good thing. After all, she needs to focus on her studies, and she’s choosing to be fabulous and abstinent — “Fabstinent!” — this year. (Laurel hops on the fabstinence bandwagon, too, now that she’s turned down Frank’s marriage proposal.)

Asher, meanwhile, is still hung up on Michaela, given that he’s been single for weeks and hasn’t slept with anyone yet. “I’m just being selective,” he insists, though Connor and Oliver can see right through that.

* Speaking of Connor and Oliver, they’re pinching pennies in order to afford a nice wedding — a wedding that we already know gets ruined by a tragedy of some sort, but they can be blissfully unaware of that for three more months. After doing some real estate research, Oliver finds a house in the area that he, Connor, Michaela, Laurel and baby Christopher can all live in together. “It takes a village to raise a baby anyway,” Oliver says. “Let this be our village!” The group reluctantly agrees to move in to the old-fashioned digs… but Asher, fresh off his rejection from Annalise’s clinic, isn’t invited to the party. Ice, ice, baby.

OK, your turn. What did you think of Murder‘s return? Grade the Season 5 premiere in our poll below, then hit the comments to back up your choice!