Team Flash was introduced to Season 5’s Big Bad this Tuesday. In Round 1, were they able to swat Cicada?

After “rewinding” a bit to show us exactly what Cicada did to Gridlock at the close of the premiere — he yanked Lang out of the prison van, used one of his lightning bolt-shaped daggers to suck away the meta’s powers, and then whaled on him (before reporting for work at his janitorial gig) — this week’s episode spent much of its time exploring the Barry/Nora dynamic.

As Candice Patton foretold, Barry and Nora’s secret about the extent of his 2024 vanishing didn’t keep long at all; instead, they shared it ASAP with the others. Iris, bless her, was not discouraged by the disclosure. As she smartly noted, they have dealt with and changed, as needed, future events before. And they will do so again. (That said, she now “gets” why Nora is a Daddy’s Girl.)

When the Villain of the Week, who was eventually and listlessly dubbed Block, emerged, Nora proved to be XS-ively eager to please her pop. It wasn’t until Barry consulted with Joe that he realized that he himself was the same way upon joining the West family as a kid. And Barry, as a father, is even more of an idol, seeing as there are literally museums for and statues of him in the future! Show her that you’ll always love her, no matter what. That’s what parents do, Joe advises. (Those words also helped soothe an eavesdropping Cecile, who was anxious about facing new motherhood without her power to “hear” newborn Jenna.) 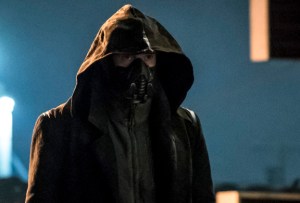 Iris, meanwhile, swung into Reporter mode to glean from Captain Singh that Gridlock had been brutally murdered. Calling up the body cam footage, Iris sees little but hears… a strange sound. At episode’s end, when Barry, Cisco and Ralph found themselves face to face with — and had their powers promptly negated by — a hooded/masked figure, Iris recognized the sound as that of Gridlock’s killer. Iris waned the boys to flee the scene, but they were unable. Luckily, Nora showed up, bellowing, “Dad!” And that for some reason seemed to trigger a reaction from their assailant, who held back from ending Barry and slipped away.

Back at STAR Labs, the team gives a listen to the baddie’s tell-tale sound, which they agree sounds like a cicada. Nora obviously recognizes that name. “Who’s Cicada?” asked Barry of his daughter from the future.

Elsewhere in the episode: Cisco revealed to Caitlin and Ralph that he is unable to vibe, heartbroken as he is over the breakup with Gypsy. Ralph and Caitlin set out to un-break their friend’s heart, using the former’s 27-step program. And while a boring makeover didn’t do the trick, Cisco came to realize that if Gypsy was “the love of his life,” she would still be in his life. After accepting that, he convinces Caitlin to let him vibe her dad’s fake death certificate to track down its author, which triggers a vision of… Caitlin’s mother?