Looking for an Episode 1 recap of The Romanoffs? You can find ours here.

After two episodes of Amazon’s anthology drama The Romanoffs, both of which debuted on the streaming service Friday, a clear theme of the show has emerged: Man, these people really like to cheat on each other!

Though Episode 1 of the series, created by Mad Men boss Matthew Weiner, was not solely about romance and relationships, it still included — spoiler alert! — a moment of infidelity that led to a pregnancy that led to a break-up. (And yet, the characters still managed to get a happy ending.)

Episode 2, on the other hand, zeroes in more closely on the complexities of a marriage and what can happen to a couple that is no longer happy. (I can tell you! They cheat!)

The installment stars Corey Stoll (House of Cards) and Kerry Bishé (Halt and Catch Fire) as married couple Michael and Shelly Romanoff. (He’s the descendant; she married into the family.) Their marriage seems to be losing steam, as evidenced by their time spent in couples therapy and their lack of time spent having sex. Together, they run a test prep tutoring center in an Ohio strip mall, and Michael has apparently become so despondent that he tells his newest client, completely unprompted, that no one is really happy with his or her life. Cheery stuff!

When Michael is called in for jury duty, he spies a beautiful woman named Michelle (Salem‘s Janet Montgomery) from across the room and is immediately attracted to her. So attracted, in fact, that when he and Michelle are both selected as jurors for the murder trial, he extends the jury deliberation process to be days longer than necessary just so he can spend more time with her.

Michael’s jury duty ends up clashing with plans he and Shelly had made to go on a cruise — a very expensive cruise specifically for members of the Romanoff family and their spouses. Michael urges Shelly to go on the cruise by herself, because she “works hard” and “deserves it,” even though he’s really putting in motion a plan to cheat on Shelly while she’s gone. And the plan indeed goes smoothly: After spending several days in close proximity to Michelle, Michael eventually wins her over, and they sleep together multiple times. Michelle reveals that she used to be a professional ballerina before she broke her ankle, and now she’s happily(…ish) married to her husband, even though she sneaks around for a little bit of sexual freedom now and then. 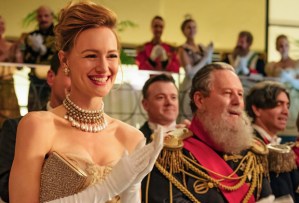 Shelly, meanwhile, meets a charming man named Ivan (ER‘s Noah Wyle) on the cruise — another Romanoff by marriage. The two of them seem to connect instantly, and after downing a lot of vodka shots at the Grand Duke’s Ball that night, they open up about their imperfect marriages and end up making out on the elevator ride to Shelly’s room. But when they reach Shelly’s floor, she hesitates, unsure if she can actually go through with sleeping with Ivan. “He’s a very lucky man,” Ivan says of Shelly’s husband, before kissing her sweetly and walking away.

When Shelly returns from her trip, she and Michael keep their infidelity secrets to themselves, opting instead for forced smiles and “I missed you so much!” pleasantries. But Michael can’t get Michelle out of his head, and he calls her incessantly until she agrees to meet him in a 7-Eleven parking lot. Once there, she breaks the bad news to him: Now that they’ve slept together and the jury deliberation has ended, it’s time for them to go their separate ways. She’s not going to be a homewrecker (in fact, that’s how her current marriage started), and she and Michael aren’t going to start a life together; he needs to move on. “What if I was single?” Michael asks her, looking for a glimmer of hope — but she says goodbye to him and leaves the parking lot.

The next day, having seemed to accept the reality that he’ll be with Shelly forever, Michael suggests they go on an early-morning hike like they used to years ago. Shelly is thrilled at the idea, and Michael happily agrees that they should hike to the very top of the path. But as they climb, Michael begins glaring at Shelly from behind her, and he seems to get increasingly resentful as they go higher. Finally, they reach the top of the hike, and Shelly goes to the edge to take in the view — and Michael pushes her off the cliff. (!!)

At first, Michael seems a bit relieved that Shelly is out of his life… until it turns out she’s very much alive. She’s hanging off the side of the cliff, a bit bruised but otherwise fine, and she’s rightfully furious that Michael just pushed her. “You tried to kill me!” she screams, though a flustered Michael insists that he doesn’t know what came over him.

Shelly eventually drops down to the ground, completely rattled by her husband’s attempt at murder. Michael meets her down there, carrying her water bottle, tearfully begging her to believe that he wasn’t trying to kill her. But Shelly’s not buying it: “I can’t believe it took that to make me realize this is over,” she tells him, dousing him with pepper spray when he tries to approach her. While an incapacitated Michael tries to rinse the spray out of his eyes, Shelly leaves him there and drives off from the woods — and slowly but surely, her panicked expression breaks into a big smile.

With that, I turn it over to you. What did you think of The Romanoffs‘ second installment? Cast your vote in our poll below, then drop a comment with your thoughts.