The following sentence is brought to you by the Peak TV era: Amazon on Friday unveiled the first two episodes of The Romanoffs, an anthology drama from Mad Men creator Matthew Weiner. (It’s like playing Prestige TV Mad Libs!)

Boasting a star-studded cast — including some familiar faces from the Mad Men world — the series spans eight episodes, the next six of which will roll out weekly following Friday’s two-installment debut. The episodes are all Black Mirror-esque mini-movies, each one telling a self-contained story about people who believe themselves to be descendants of the Russian Romanov family, famously murdered by Bolsheviks in 1918.

Before you give us your thoughts on Episode 1, let’s recap the events of “The Violet Hour”:

The series premiere takes place in Paris, where Romanov descendant Greg (Aaron Eckhart, The Dark Knight) lives with his (highly unlikable) girlfriend, Sophie. The two of them co-manage a hotel in Paris, where they also live — but Sophie has her eye on a lavish apartment owned by Greg’s hypochondriac aunt, Anushka. The apartment has been in the Romanoff family for decades, and when Anushka passes, it will belong to Greg, who is her only remaining family member.

But Sophie is growing impatient for Anushka to die; despite her high blood pressure and occasional fainting spells, Anushka is still in excellent health, and Sophie is furious that the woman won’t just kick the bucket already. (She even suggests to Greg that they should kill Anushka in order to get the apartment, in case you weren’t yet convinced that she is a terrible person.)

The real focus of the premiere, though, is the relationship between Anushka and her new in-home caregiver, Hajar Azim, a young Muslim woman who is studying to be a nurse. When Hajar first shows up at the apartment for her new job, Anushka is terribly cruel to her. She’s horribly xenophobic and racist, telling Hajar upon meeting her for the first time that she should “take her bombs and go home.” (And that might rank among the nicer things she says to the girl.) 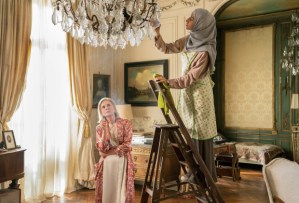 But Hajar is incredibly patient with Anushka, brushing off her hateful comments with a smile and thoughtful gestures for the woman. As time passes, the women grow closer and develop a special bond. When Anushka collapses again and gets sicker than she has been in the past, Hajar stays by her bedside through the night and holds the woman’s hand; Anushka, for her part, begins to reveal a more vulnerable side, sharing with Hajar that all of her family members (including her husband and son) are dead, which has contributed greatly to her prickly personality.

Anushka ultimately develops such a fondness for Hajar that she rewrites her will while Greg and Sophie are on vacation; in the new version of the document, Hajar will be the one inheriting the apartment when Anushka dies, instead of Greg. Naturally, Sophie is incensed upon hearing the news, leading her and Anushka to exchange horrible words with one another before vowing to cut each other out of their lives.

Later in the episode, Greg takes Hajar out to dinner with the intention of persuading her to reject the apartment offer and let Greg and Sophie have it. Hajar, who is perhaps the only level-headed person in the premiere, calmly tells Greg that she didn’t ask for Anushka to change her will, and she has no intention of giving up the apartment. Greg then apologizes for his behavior (“Sophie’s the one who cares about the apartment, not me,” he correctly tells Hajar), and the pair enjoys a lovely dinner where they seem to forge a real connection with each other. And the lovely dinner leads to a lovely walk around Paris. And the lovely walk leads Hajar to trip and scrape her knee. And the scrape leads Greg to take Hajar back to his hotel and clean up her injury — and after he does, they give in to their chemistry and sleep together. (“We both knew what we were doing,” Hajar says afterward. “And we both know it can’t happen again.”)

The next day, a guilty Hajar politely tells Anushka that she can’t accept the apartment, leading Anushka to — you guessed it! — verbally eviscerate the poor girl before firing her from the caregiver job. “I wish you the best in your life as a servant,” Anushka says, coldly.

The premiere wraps up with a two-month time jump: Anushka and Sophie are still not on speaking terms; Hajar has not returned to Anushka’s apartment since she was fired; and Greg is getting tired of Anushka forcing him to choose between his aunt and his girlfriend — but it’s quickly revealed that he has an even bigger decision to make. While he and Anushka are playing cards in the apartment, Sophie angrily bursts in, accompanied by Hajar, Hajar’s mother and a major announcement. The night that Hajar and Greg slept together? Resulted in a pregnancy. Oh, and Hajar is in love with the guy.

Given that The Romanoffs‘ premiere is 90 minutes long, the episode’s plot seems to wrap up rather quickly. In a matter of minutes, Greg decides to leave Sophie and stay with Hajar, revealing that he “feels really happy right now” after learning Hajar is expecting. Hajar’s mother, who was previously ashamed of her daughter for sleeping with an unavailable man, is now beaming at the couple’s decision to be together. Anushka quickly makes up with Hajar, happily announcing that “this was all [she] wanted — for the [family] line to continue!” And Sophie, who is rightfully incredulous at the events unfolding before her, ditches Greg and Anushka — but before she leaves the apartment, she grabs the gorgeous Fabergé egg that is sitting on a shelf, announcing that she’ll accept it as payment in full for the emotional damage she’s experiencing.

In a lovely bit of karma, though, it turns out the egg is a fake, as Anushka had revealed to Hajar earlier in the episode.

OK, your turn. What did you think of The Romanoffs‘ first episode? Grade the series premiere in our poll below, then hit the comments to back up your choice!