“For the first time in my life, I’ve got everything under control,” Kara boasted atop Sunday’s Supergirl season premiere, which meant it was only a matter of time before everything fell apart. And it did. Quickly.

After a day of stopping runaway trains and returning priceless paintings all around the world, Kara figured that a break-in at a National City laboratory would be business as usual. Unfortunately, the criminals — Mercy and Otis Graves, former security experts for the Luthor family, now working for the mysterious Agent Liberty — were ready for the Girl of Steel, paralyzing her with sound and sending her plummeting to the ground below. (Graves siblings: 1, Supergirl: 0.) 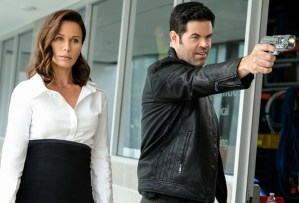 A chat with Lilian helped Kara and Brainy narrow down the Graves’ hideout (“Would you believe it’s an abandoned warehouse?”), where they discovered that the anti-alien siblings were plotting to assassinate President Marsdin during her upcoming alien peace summit at Camp David. Armed with this information, #TeamSupergirl was able to foil the siblings’ plan… or so they thought. “You think you stopped us tonight, but the fuse was lit,” Otis told Kara. “And it’s going to be beautiful.” Before Kara even had a chance to ponder that little riddle, she saw footage on the news from the attack — footage that revealed President Marsdin to be an alien. (Graves siblings: 2, Supergirl: 0.)

The episode ended by taking us back to Kaznia, the site of Kara’s aforementioned train incident, where other Kara — remember her from the end of the Season 3 finale? — was punching her way through the underground for… reasons.

WHERE ARE THEY NOW? | Though the premiere made no mention of Mon-El, we did get an update on several other recently departed characters. Sam, for example, is apparently “doing amazing” running L Corp’s northeast base of operations, while Ruby is also finding success on the soccer field. We were even informed that Superman is currently “off-world at Argo,” which should snuff out the usual “Why doesn’t Superman show up and help his cousin?” complaints from viewers. (At least we know we’ll see him in this year’s crossover event!)

THE ODD COUPLE | Winn’s departure was also briefly discussed, with Alex eventually admitting that his absence is the reason she’s been having such a difficult time working alongside Brainy. “I can’t win… because I’m not Winn,” Brainy told her. “He was your ‘bro.’ I’m not him.” This confrontation came after an episode’s worth of clashes between the two, mostly triggered by Brainy failing to anticipate Alex’s needs. “Either way, we’re stuck with each other,” she conceded, which is something everyone wants to hear from their new co-worker. 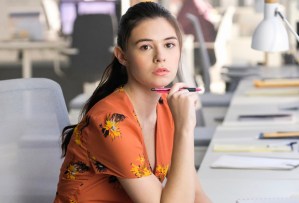 KARA 2.0 | Though we may not see her suiting up as Dreamer for quite some time, Sunday’s premiere gave us our first taste of new cub reporter Nia Nal, who came highly recommended from none other than Cat Grant. And it wasn’t hard to see why — between her eager demeanor, optimistic outlook and adorable awkwardness, she’s basically the second coming of Kara. Of course, Nia will need to silence the doubting voices in her head if she wants to succeed at Cat Co.; despite having an incredible story pitch, she allowed herself to be trampled by another reporter, not even bothering to speak up during the editorial meeting.

GUARDIAN’S ANGEL | James began the episode with a criminal case mounting against him for his vigilante work as Guardian, but he insisted that Lena not get involved, lest she find herself drawn back into her family’s life of crime. But because Lena isn’t one to take orders so easily, she went behind his back — as well as her mother’s — to get the dirt on a mob boss with close ties to Lilian, for which the District Attorney agreed to drop the investigation into James’ vigilantism. That said, the D.A. made it clear (on live television!) that James will be “immediately arrested” if Guardian ever returns to the streets. (Gee, why am I having a tough time accepting that James will hang up his Guardian suit so easily?)

Your thoughts on the direction in which Supergirl‘s fourth season appears to be heading? Grade the premiere below, then drop a comment with your full review.