How does Ian spend his last episode of Shameless? Surprisingly, in peace and quiet. (His portrayer Cameron Monaghan is leaving the Showtime series, in case you missed the news.)

Ian is heading off to prison soon, but he doesn’t want to partake in any crazy antics on his last day of freedom, like his siblings suggest. Instead, he opts to stay in, where he feels safe and relaxed, and have White Castle as his last meal. That little bubble of tranquility, however, is popped by a dose of harsh reality when Carl and his new girlfriend attempt to teach him prison survival skills. Then, a friend visits to give Ian a tutorial on the safe and dangerous areas of the correctional facility. (West side = murderers. East side = Disney. Noted!) 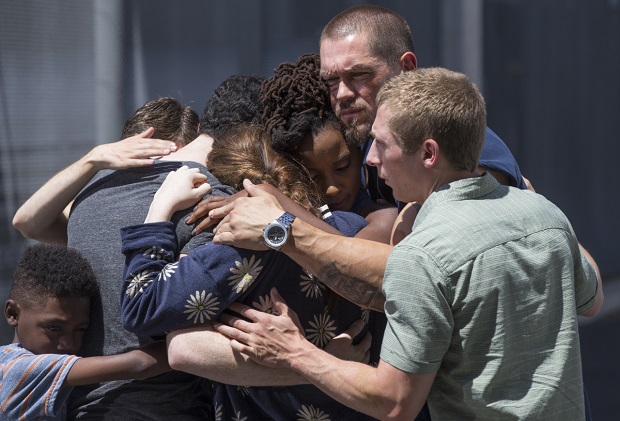 The next morning, Fiona is MIA — more on that below — so Kev offers to drive Ian to the prison, along with the rest of the family. Everyone says their tearful goodbyes and shares a big group hug. “I love you guys, too,” an emotional Ian says. He then thanks Lip for being his brother.

As Ian stands in his cell, clearly overwhelmed and scared, he hears the door open up behind him. He turns around to find… his ex, Mickey (Noel Fisher)! Apparently, Mickey spilled info on the cartel he was working for, and in exchange, he got to choose where he’s locked up. Yes, Ian and Mickey are cellmates. So as the two hop on the bed and start making out, it’s a sorta happy ending for Ian. 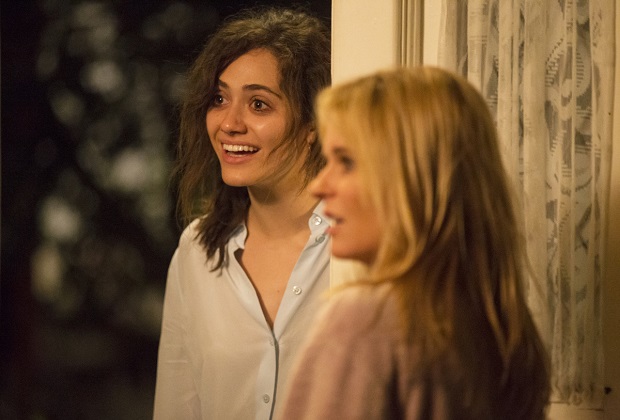 * Fiona needs $25,000 for her retirement home investment, but the bank won’t give her the money, and there’s barely anything in the safe at the diner. After she lies to Ford about why she can’t move into an expensive new apartment with him, they get into a huge fight. Later, a drunken Fi decides to apologize and uses the “Find a Phone” feature to track down her beau… to the house of his wife Patty and their son! Ford explains that they’re separated and getting divorced. Fiona just drives off and crashes her car into another vehicle. She’s OK, but storms away from Ford by foot. So not only is she about to lose her investment and her building, but her relationship is a mess and she misses the chance to say goodbye to Ian, which you know she’s going to hate herself for.

* Frank explains to Liam that he’s good at crazy and likes the excitement. Hence, the lady from the ER (Katey Sagal) is the one for him. Frank even follows her from the hospital to her home to tell her he likes that crazy side of her.

Shameless fans, what did you think of Ian’s farewell episode? Watch a “Gallavich” recap, then hit the comments!

Locked up with our hearts on lock. 🔐#Shameless-ly gave this #Gallavich video a little edit… pic.twitter.com/E6noPHveV9