Something wicked this way comes… and for the members of The Haunting of Hill House‘s deeply unfortunate Crain family, that malicious presence is gonna stick around for quite some time.

Netflix’s 10-episode series adaptation of Shirley Jackson’s horror novel started streaming on Friday and soon revealed itself as a complex family drama merged with a ripping good ghost story. In a moment, we’ll want to know what you thought of the premiere. But first, a recap: 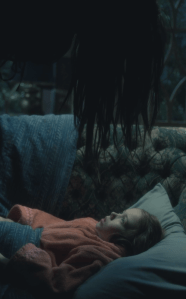 We’re introduced to the Crains via flashback: Salt-of-the-earth dad Hugh (E.T.‘s Henry Thomas) and free-spirit mom Olivia (Wayward Pines‘ Carla Gugino) have moved their five kids into a huge, old mansion called Hill House for the summer while Hugh and Olivia do the work necessary to flip the property. But right away, we learn that the place creeps out the kids: Young Nell cries out in the night when she thinks she sees “the bent-neck lady,” and both Hugh and older brother Steven assure her that there’s no such entity. But as we see after Nell is tucked back in bed, Steve and Hugh might not be so right about that.

As the episode progresses, we get a taste of what the Crains’ life was like that summer. The kids — there’s also Nell’s twin, Luke, as well as older girls Theo and Shirley — are left to roam the house and grounds while their parents spruce up the property. The children encounter a bunch of mysteries (Luke has an imaginary friend he swears is real, Nell and Shirley are desperate to find the key to the mysterious and locked “red room” at the top of the stairs); the severely Christian groundskeeper’s wife (played by The X-Files‘ Annabeth Gish), who refuses to be in the house after dark, hints that there’s more going on than anybody realizes.

Then all of a sudden, Hugh steals into Steven’s room one night and frantically tells him they’ve got to get out of there. The boy is freaked out by his father’s panic, then even more freaked out when an unseen person (?) unsuccessfully tries to get into the bedroom. Eventually Hugh makes his son promise to keep his eyes closed, then carries him out to the car where his equally terrified siblings are waiting. The kids quickly notice that Olivia’s not there… and Hugh doesn’t have a great answer for why that is.

Fast-forward several decades, and Steven (played as an adult by Game of Thrones‘ Michiel Huisman) is now a bestselling author who’s built his career on writing about Hill House and other so-called “haunted” places — much to the chagrin of some of his siblings, who feel he’s capitalized on their mother’s suicide and father’s subsequent emotional problems. 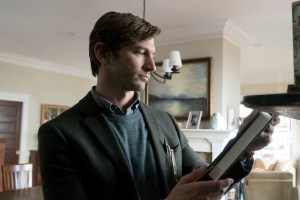 As Steven interviews a potential subject for a new book — a widow who is convinced her dead husband hovers over her bed at night — he ignores a call from Nell. So does Shirley, who’s now a funeral-home owner (and played by Twilight‘s Elizabeth Reaser); when Shirley listens to her voicemail, her little sister sounds agitated and says that’s she worried about Luke (now Emerald City‘s Oliver Jackson-Cohen), who is in rehab. (For completion’s sake, Theo — now played by Gerald’s Game‘s Kate Siegel — is a lesbian with strongly staked emotional boundaries and a penchant for wearing gloves.)

Nell also calls her dad (now played by Leverage‘s Timothy Hutton), telling him she’s in Los Angeles. But as we see, she’s actually back at Hill House in Massachusetts. As she prepares to walk in, all the lights in the abandoned property turn on.

Despite what Nell says, Hugh has a sense something is wrong. While he’s on route to the house, we watch Nell waltz around the empty home, seemingly in a trace. Then, at 3:02 am Eastern Time, every Crain sibling wakes from a nightmare. “Nellie’s in the red room,” Shirley mutters without realizing what she’s saying.

Steven later returns home to find Luke stealing from him, ostensibly for drug money; Steven’s disappointment in his brother is so ingrained, he barely gets angry. After Luke leaves, Steven is surprised to find Nell standing in his apartment, and he’s angry that she just watched Luke rob him without trying to stop her twin. Nell says nothing, and Steven angrily turns away to take a call from his father.

Hugh says he’s at Hill House. Nell is there, too. And she’s dead.

Steven turns around to find Nell nearly on top of him, her face decaying as he watches. Then she screams, knocking him to the ground in horror, and disappears.

It’s important to note that the adaptation, helmed by horror director Mike Flanagan (Gerald’s Game, Occulus), is inspired by Jackson’s well-known novel, but the story differs greatly. Still, fans of both the original source material and some of its previous adaptations will find Easter Eggs aplenty hiding among Hill House’s haunted grounds.

Now it’s your turn. What did you think of the premiere? Will you be back for Episode 2? Answer our polls below, then elaborate in the comments!