Michael works overtime to keep the humans together this week on The Good Place — but are they headed for a split anyway? 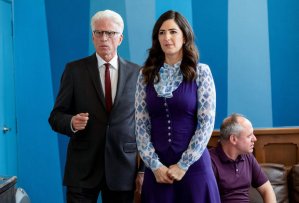 He and Janet are back on Earth, after escaping Judge Gen, and determined not to return to the afterlife until they’ve saved the four humans’ souls. Without their otherworldly powers, though, they’re forced to rely on hidden cameras and microphones to keep an eye on Chidi’s study group. Three months later, when a broke Eleanor worries she’ll have to return home, Michael can’t resist meddling to make sure she stays in the study. (He tells a skeptical Janet to think of them as “a snowplow,” clearing Eleanor’s path.) So Janet uses her encyclopedic knowledge of everything ever to pick out a winning lottery scratch-off card, and boom! Eleanor suddenly has enough money to stay. (When she announces she won $18,000, an unimpressed Tahani tells her, “Better luck next time.”)

Another three months pass, and when Michael senses that a “mad horny” Tahani (her words!) is about to pounce on Jason and ruin the group dynamic, he arranges for her to bump into her ex Larry Hemsworth. (Yes, the brother of Chris, Liam and Luke. But don’t mention that to him. He’s very touchy about it.) This time, though, the meddling backfires: After six more months pass, Tahani announces that she and Larry are engaged, and she’s moving back to London to plan their wedding. If that weren’t enough to fracture the group, Chidi and Simone break the news at Tahani’s lavish engagement party that after a full year together, they might have enough data now to finish the study — and Eleanor doesn’t like that one bit. 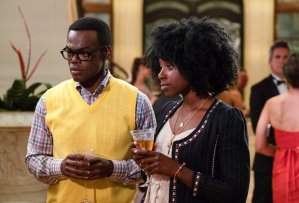 She lashes out at her pals, calling the study a “stupid, worthless joke” and destroying a perfectly nice cake that had all their faces on it. After she calms down, though, she earnestly asks Simone the brain expert why she would react like that. Simone thinks she’s never been in a group before that she identified with, so she’s defending it because she doesn’t want to be alone again. (That, or she’s just “a bit of a dick.”) Eleanor apologizes to everyone, and they agree to get together once a year to reminisce. Michael isn’t happy, though: Even though Janet tells him it’s time to “park the snowplow” and trust the humans to fend for themselves, he thinks the answer is to reset Earth’s timeline somehow. He summons the magical golden door back to the afterlife… and the four humans walk in and see it, leaving a puzzled Eleanor to ask, “What the hell is that?”

* A furious Judge Gen yelling at Michael and Janet: “I have never been this angry in my life… which is the age of the universe!”

* Eleanor blaming her farts on the chair. (Jason: “Your chair smells bad.” Eleanor: “See? Another person who agrees it’s the chair!”)

* The all-knowing Janet cheerfully telling a barista that “the woman that you think is your aunt is actually your mom!” and a bartender that his ex-wife still loves him: “You must show her your poetry.”

* Tahani telling Jason she likes football, too: “I actually dated a player once, but he wasn’t my type, so I set him up with my friend Gisele. [pause] Bundchen.” 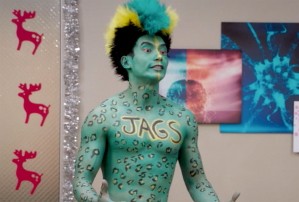 * Tahani telling the group about Heir B&B, where the super rich can “swap mansions, private islands, blimp hangars, that sort of thing.”

* Larry’s crippling self-doubt about being just “a dumb old pediatric surgeon who barely has an eight-pack.”

* Tahani reassuring Larry that he’s just as desirable as his more famous brothers: “Fixing baby spines is just as valuable as acting!”

* Janet letting her not-so-hidden affection for Jason slip out, like when she offered to keep an eye on “Sweet Cheeks. I mean Jason’s butt. I mean Jason!”

* Jason proudly caw-cawing after Eleanor refers to him and herself as “straight trash.”

* Jason inviting the study group to his place in Jacksonville: “My house is right on the water! It didn’t use to be, but the whole city is a swamp, and it’s sinking into the ocean.”