That devilish scamp Trevor is back to mess with The Good Place‘s core foursome. Can he derail Michael’s Earth experiment before it even gets going? 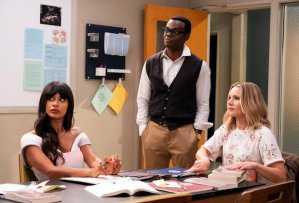 As last week’s premiere teased, Trevor has infiltrated Chidi’s near-death experience study, and he’s annoyingly friendly, which immediately turns Eleanor off. (Jason likes him, though. Of course.) Michael heads back down to Earth — in a Dick Tracy hat and trench coat, which Trevor promptly mocks — to confront the Bad Place demon. Sure, Trevor could’ve just ratted Michael out to Judge Gen, but as he tells Michael, “this way’s more fun, knuckle-nuts!” Trevor is determined to drive a wedge between the humans, and he may have a head start: Eleanor isn’t happy with the group set-up and wants to continue her one-on-one ethical training with Chidi… but he tells her he doesn’t have time for that, now that he’s consumed with this study.

We’re then treated to maybe the funniest set piece in Good Place history when Trevor invites the gang to a USA-themed bar called the Cowboy Skyscraper Buffet, a hilariously grotesque mash-up of ugly-American clichés. (The buzzer they give you that buzzes when your table is ready is an actual handgun, and on the wall is a modified Mount Rushmore featuring David Hasselhoff, Paris Hilton, Judge Judy and Hulk Hogan.) Trevor is having a swell time, handing out matching “Brain-y Bunch” sweatshirts to the whole gang, but his face falls when he sees their waitress: Yep, it’s Janet. 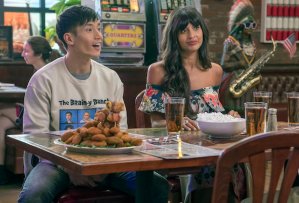 Janet vows to keep an eye on him, but she’s thrown by the fact that a tray of beers doesn’t magically appear in her hands when she says it aloud. (It’s understandably a rough adjustment for her.) Meanwhile, Trevor goes to work, planting a seed in Chidi’s head that it might be unprofessional for him to hang out with his study participants, and also getting Jason and Tahani ragingly drunk on vodka shots. It works, too: Chidi runs off to avoid ruining his study, and a drunk Tahani ends up cuddling with Jason, which Trevor predicts will lead to her leaving the group in embarrassment. He taunts Michael and Janet with his rapid progress… and reminds them that Judge Gen will notice they’re gone pretty soon.

The next day, Tahani is indeed humiliated by “her uncouth comportment” the night before, handing out formal letters of apology — but she also says Jason was a perfect gentleman, so she’s sticking with the study. Eleanor ditches the study to stay home and read Aus Weekly (ha!), after telling Chidi she came to Australia to work with him, and not a whole group of weirdos. (Our word, not hers.) But Chidi tracks her down, and credits her coming into his office with knocking him out of his indecision spiral. He begs her to come back: “I’m asking you as a friend.” She says yes — and now it’s Michael and Janet’s turn to gloat. 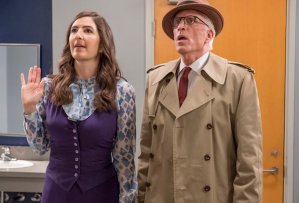 Not so fast, though. Suddenly, that magical golden door materializes, and the Doorman enters to tell Michael, Janet and Trevor to follow him: “The judge wants to see you.” Back in the afterlife, Judge Gen scolds Michael for all of his unauthorized trips back to Earth. (Trevor tries to kiss up to her, but she effortlessly flicks him into an infinite void of darkness.) Gen tells them their meddling has caused a destructive ripple effect back on Earth, so from now on, the four humans are on their own. She’s also poised to send Michael and Janet into early retirement… when a tray full of beers appears in Janet’s hand. All the things she requested on Earth start appearing all at once, and pile up in front of her and Michael, separating them from Gen. Michael takes advantage of the distraction, and with the Doorman’s help — he still appreciates that frog sticker Michael gave him — he and Janet head back through the golden door to Earth. (For good?)

* Jason believing if he holds a spider while getting an MRI, he’ll get super powers: “He already bit me a bunch of times and gave me the power to swell up my hand!”

* Eleanor complaining about losing Chidi’s personal attention: “I feel like last week, I had my own personal ninja master, and now I’m taking tai chi with a bunch of farting housewives.”

* The hostess at the Cowboy Skyscraper Buffet noting that the Florida table is taken, but “if you purchase our ‘Manifest Destiny’ package for $30, you can have anyone you want forcibly removed from the table!”

* Janet the waitress describing the bar’s special “Fourth of July” cocktail: “It’s half an apple pie, blended with Southern Comfort and Coca-Cola, served in a Chevy hubcap.”

* Tahani: “I once played a drinking game with Ryan Reynolds and Blake Lively at their macrobiotic farm with a particularly robust batch of homemade kombucha.” Jason: “Do I have to drink for every word I don’t know?”

* Trevor explaining why he goes to the bathroom, even though he’s a demon: “I like the smells. And I like putting my hands in the toilet so everything I touch gets a little bit of poop on it.”

* Jason, in awe of Tahani: “You’re the fanciest person I know… next to my friend Ronnie, who drives a limo. He’s in limos all the time. What a life!”

* Eleanor explaining why she doesn’t like being part of a group: “I’m better when it’s one-on-one, and we’re both looking at our phones, and I don’t know the other person, and we don’t talk.”

* Judge Gen listing all the negative effects Michael and Janet’s meddling have had on Earth: “England left Europe. That Hugh Jackman musical about P.T. Barnum made, like, 400 million dollars. Also, the Jacksonville Jaguars are good now!”