All four humans are back on Earth as The Good Place kicks off Season 3… so where the fork do they go from here? 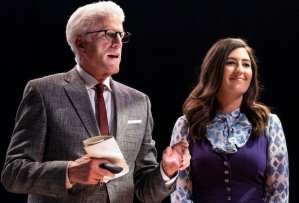 Thursday’s one-hour premiere begins with a flashback to Michael explaining his “experiment” to a less-than-amused “Doorman” (played by Glee alum Mike O’Malley) before he’s allowed to pass through a magical golden portal to Earth, where he steps in to save the lives of Eleanor, Chidi, Tahani and Jason. Michael returns exhilarated — “I saw this place that was at once a Pizza Hut and a Taco Bell! The mind reels!” — but his mood darkens when he sees the foursome all struggling to become better people. He thinks it would help if the four of them were back together again, and decides to “noodge” them in that direction. So while Judge Gen is busy binge-watching NCIS, Michael tells the Doorman she authorized another visit to Earth (she didn’t), which leads to his bartender act with Eleanor, which takes us up to the Eleanor-Chidi reunion that ended Season 2.

Eleanor explains to Chidi her near-death experience, her brief stint as a do-gooder and how his YouTube speech inspired her after she fell off the morality wagon. She asks him to be her moral guide, and when he says yes, Michael and Janet exchange a thumbs-up in the afterlife. We also get an answer to the nagging question about Chidi speaking French when he speaks French to a colleague, explaining that it’s his native tongue, but he also speaks English, German, Greek and Latin, “just in case it ever comes back.” (Eleanor, by comparison, got a perfect score on a Buzzfeed quiz about Kardashian slang… she admits she cheated, though.) 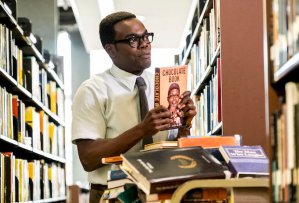 But why does Chidi want to help Eleanor? As he explains, he had his own near-death experience with a falling air conditioner, and fearing his “brain is broken” by his paralyzing indecisiveness, he turns to Simone, a neuroscience professor at his university played by Killing Eve‘s Kirby Howell-Baptiste, for help. She gives him an MRI, and once he sees there’s nothing structurally wrong with his brain, Chidi goes off on a decisiveness kick, dumping his way too long thesis… and spending more and more time with Simone. But his misguided pep talk that leads to his pal Henry snapping his tendons on the gym’s leg press — along with hearing that the blueberries in his favorite muffin are harvested by mistreated migrant workers — snaps Chidi back into his indecisive funk. It takes an intervening Michael, sporting a shaky Aussie accent, to convince Chidi to “get out of your head” and “help someone else”… just before Eleanor walks into his office.

While Eleanor repays Chidi by encouraging him to ask out Simone once she sees the spark between them (“You’re both teachers… who are hot for teacher!”), back in the afterlife, a furious Shawn is doggedly searching for the missing foursome. He has his minions try to hack into Gen’s computer system to find out how the four are doing on Earth, encasing anyone who dares to disobey him in a slimy cocoon. Finally, a worker sees that Michael’s frequent trips back down to Earth have opened a backdoor into Gen’s system, and Shawn catches Michael “with his hand in the human jar.” (Hold that thought, because it’s coming back in a big way.) 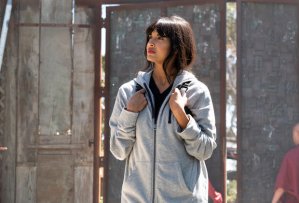 Chidi is struck with a new thesis idea: He’ll look at the impact of near-death experiences on ethical decision making, and make it a joint study with Simone’s department. And his test subjects include… Tahani! We get her backstory: After she’s saved by Michael from a falling statue of her sister Camilla (Camilla gets credit for saving her, of course), Tahani embarks on a journey of selflessness, shedding her worldly possessions and jetting off to a Buddhist retreat. (Not even in first class!) There, she humbly meditates and sweeps floors until she runs into a documentary filmmaker who wants to do a profile on her and her “monk junk.” Next thing we know, Tahani authors a bestselling book titled “Get Out of the Spotlight” and fully enjoys the fame that comes with it. Once again, Michael steps in — this time as a sleazy New Age scam artist who sells “nirvana orbs,” aka “driving range golf balls that I painted silver” — and directs her towards Chidi’s study. 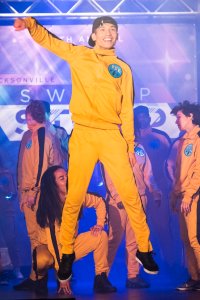 And what about Jason? Our favorite fake monk is saved from suffocating during a poorly planned robbery attempt by Michael, but manages to miss all the big honking signs Michael leaves around for him. He ends up forming a new dance crew (“We are going to eat, breathe and vape dance!”), but they keep falling short at every competition, and needing money to rent the dance space, Jason falls back into a life of poorly planned crime, leading to him getting arrested. When Michael approaches him as international talent scout Zack Pizzazz (ha!), Jason turns down his offer of a trip to Australia: “I know this sounds crazy, but I’m starting to think there might be more to life than amateur street dancing competitions.” Michael drops the act and offers to introduce him to some friends going through the same kind of existential crisis as he is.

So all four humans are reunited by Chidi’s study… everything is fine, right? Well, maybe not. First, Judge Gen starts sniffing around Michael and Janet’s tickers, forcing them to distract the NCIS fan with a Mark Harmon movie to get her out of the way. But just as they dodge that bullet, they see that Chidi has welcomed a fifth person to the study… and Michael senses “something very dark and evil” is approaching. The new study member pops his head in: It’s Trevor, the Bad Place demon played by Adam Scott! I don’t know whether I’m more in love with this ingenious plot twist… or more worried about the fate of our core four.

* Michael’s giddy excitement at the prospect of riding a city bus down on Earth: “I’m gonna sit in a front-facing seat! Or no, maybe a sideways-facing seat! I’m gonna get so motion sick!”

* Tahani’s Vogue-like “582 Questions” video, which includes this inspirational quote: “It’s not about who you know. Enlightenment comes from within. The Dalai Lama texted me that.” Also: that portrait of her holding a basketball.

* Jason proposing to the female cop arresting him, thinking it would keep him out of jail. (“Bonus: You get half the stuff I just stole!”)

* Eleanor: “I’m a trash bag, from Arizona… which is saying something. Our biggest exports are racist sheriffs and HPV.”

* Eleanor: “Whenever anybody tells me a story about their life, I always imagine all the people as being super hot. Otherwise, I quickly lose interest. Do you not do that? You can do it for free!”

* Eleanor revealing to Chidi her “doodle of a burrito, because when I first read Aristotle, I thought it was pronounced like Chipotle. Wait… is it Chip-ah-Tottle?”

* Tahani saying she gave away her possessions to “Goodwill… That’s what I call Prince William. Since he’d married a commoner, I assumed he’d know some needy people they could go to.”

* Jason inspiring his dance troupe: “I want you thinking about dance 24/7! That means every day, you think twenty thoughts about dance for seven minutes!”

* Janet telling Gen to watch the Mark Harmon movie Stealing Home, in which he is very sexy, “according to the private thoughts of more than seven million Caucasian women.”

What’d you think of The Good Place‘s season premiere? Grade it in our poll below, and then hit the comments to share your thoughts.