Warning: The following contains spoilers for the Season 9 premiere of The Walking Dead. If you haven’t watched yet, proceed at your own risk.

So far, so good. Sunday night, The Walking Dead kicked off its ninth season — and the AMC drama’s first under new showrunner Angela Kang, who also wrote the episode — with a fairly satisfying hour-plus that included a fateful trip to Washington, D.C., a proposal of marriage and a couple of deaths (one of which was a long time coming!). For whom did “A New Beginning” mark the end? Read on and find out. 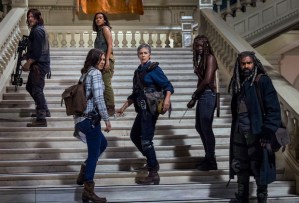 ‘I DON’T LIKE SPIDERS’ | As the episode began, we were treated to glimpses of not only how much Alexandria had been rebuilt in the 18-month time jump that followed the Season 8 finale but also the happy home life that Rick and Michonne had established with Judith. (Adorably, the moppet insisted on painting her dad with a grumpy face and big tummy in her extended-family portrait.) Before most of our regulars convened for the aforementioned field trip to D.C., we also got a peek at the goings-on at the Sanctuary (where Daryl put the kibosh on the use of a walker as a scarecrow) and in the woods (where Aaron, perhaps laying the groundwork for a new flirtation, expressed an interest in picking up Jesus’ martial-arts skills). Following the super-stylish new opening credits, a large group of survivors hit the Museum of Natural History to score seeds (thanks to intel from Anne, a former teacher) and old-timey equipment that didn’t run on gas, which had become almost as scarce as Internet service.

At first, the visit was kind of a lark. Though a walker grabbed Siddiq by the leg, he was really less grossed out by the zombie than he was by the spiders that appeared to have made a home of its head. And Gabriel dispatched a walker in just the right spot in front of an exhibit to make it appear that the undead were the final stage in the evolution of man. Or “the de-evolution of man,” as Anne put it. Cyndie bonded with Daryl over those that were no longer with them; Maggie told Carol and Michonne that, since Gregory lost the Hilltop election to her, he’d been being nice (a sure sign that he was up to no good!); and, amid all their talk of democracy’s rebirth, Carol couldn’t help but marvel at the irony of her having shacked up with a king. As for the task at hand, the group miraculously got a huge wagon down the stairs and safely across a glass floor that overlooked a level overrun with walkers. When afterwards, Ezekiel tried to cross the floor tied to a plow, he wasn’t so lucky — he wound up crashing through and dangling just above the zombies like a carrot in front of a stampede of horses. Once he was safe, Carol sweetly held and kissed him like she had no intention of ever letting him go. 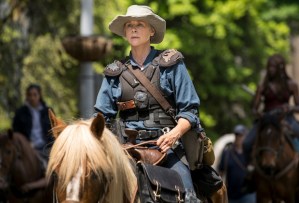 ‘WILL YOU MARRY ME?’ | As the group headed back to their respective communities, Alden informed a young Hilltopper named Ken that another kid, Marco, wanted to learn the blacksmith trade from Ken’s dad, Earl. This, despite the fact that, as Marco put it, “I don’t think I’ve ever seen the guy smile.” Nearby, Ezekiel popped the question to Carol — he had a ring and everything! But she refused to be proposed to at that moment. “This is not happening on a horse,” she said. Regardless, “I love you,” he replied, “and I always will.” (If Season 4 of Fear the Walking Dead has taught me anything, it’s that a little romance can go a long way toward improving what is ordinarily a pretty grim show — it adds a bit of light to the darkness and raises the stakes when the inevitable occurs.) Shortly, the gang was intercepted by Rosita with a report that two herds of walkers had merged and taken down a vital bridge. On the group’s alternate route home, their horses were unable to pull the trailer through a huge puddle of mud. By the time Rick & Co. had freed the wagon, they were beset by walkers, one of which bit Ken when he nobly tried to save his horse.

Back at the Hilltop that evening, Maggie broke it to Earl (John Finn) and wife Tammy (Brett Butler) that their son had been killed. Earl took the bad news quietly; Tammy, not so much. She made it abundantly clear that she blamed Maggie for Ken’s death, which she noted had yielded what? Supplies to help the Sanctuary, not even the Hilltop! That being the case, she didn’t want Maggie at the boy’s funeral. “I voted for you,” she spat, “but we’re not friends.” She also let slip that she’d been talking to Gregory — or, as she put it, the guy who’d always put the Hilltop first. (Uh-oh.) Following the funeral, Gregory paid a visit to the grieving parents with a bottle of whiskey. After getting Tammy soused enough to be put to bed, the weasel stayed behind with Earl, pouring a glass for the recovering alcoholic and intoxicating him with not only booze but talk that disgruntled Hilltoppers like him didn’t have to put up with Maggie’s priorities. But “she’s the leader,” Earl said. “She doesn’t have to be,” replied Gregory, all but sprouting devil horns. 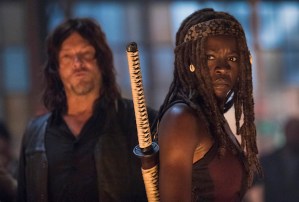 ‘BLESS YOU, RICK GRIMES’ | Meanwhile, Rick, Michonne and Daryl delivered to the Sanctuary its share of the haul from the museum. Of note: Daryl was now in charge of the place (and hating every minute of it); it was struggling since, as Daryl put it, “Nothing grows here — it’s a damn factory, man!”; and Rick was regarded by some of the Saviors as a cross between a rock star and Jesus, and others as public enemy No. 1 (as evidenced by the “Saviors Save Us! We Are Still Negan!” graffiti that had been popping up). During a moment alone with Rick, Daryl admitted that he no longer wanted to lead the Sanctuary — and that he missed the old days. “There ain’t no us anymore. Everyone’s everywhere,” he said. “That small group we had back in the beginning could do anything.” Rick tried to explain that, well, things have changed, but Daryl wasn’t in any mood to hear it. “You changed ’em, Rick,” he said. So much so that Daryl didn’t want to return to Alexandria, he wanted to return to the Hilltop. (Not a surprise, but still — ouch.)

Having overheard the conversation, Carol later approached Daryl to share a smoke — or so he thought; she actually wanted to put his cigarette out. “Those things’ll kill you,” she said, adding that she’d noticed he never sleeps whereas her wannabe fiancé sleeps like a baby. “Does he snore fancy, too?” asked Daryl. He was just kidding, mind you. He was happy that Carol was happy, and she was “glad I have pookie’s approval” of the romance. Maybe Ezekiel was a little corny, she admitted. But “after what I went through with Ed, corny is really nice.” In the end, she offered to take over the Sanctuary for Daryl. Was she going to bring along Ezekiel and Henry? Erm, she hadn’t told her beau her idea yet. But she thought it was a good one nonetheless. On one hand, she wanted to help out; on the other, she didn’t want to rush their relationship. 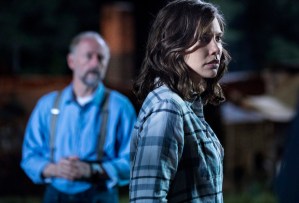 ‘THEY DON’T WANT NEGAN, THEY WANT FOOD’ | While Daryl and Carol were reconnecting, Michonne went from teasing her significant other about his status as “the famous Rick Grimes” to engaging in some pretty heavy pillow talk. “Seeing [Negan’s] name on the wall… ” she mused. “Sometimes I think maybe we should’ve just killed him.” (A little late for that now!) Still, the visit to the museum had started a plan formulating in her brain to unify the communities: They needed to write a charter to lay out the rules of behavior, punishments, expectations, etc. “It could pull people closer together,” agreed Rick — make an “us” of a larger “us.” So while Rick got to the work on repairing the bridge, Michonne would get started on the charter. “How’d I get so lucky finding you?” he whispered as they snuggled under the covers. “We’ve both lost enough,” she replied. “It’s time we won a little, don’t you think?” And with that, it appeared that she was about to get it on with “the famous Rick Grimes.”

At the Hilltop, Maggie was walking cute, melon-headed baby Hershel in the moonlight when she was — oh, s— — approached by Gregory, who might be the only thing worse than a walker a person could come across in the dark. Still being “nice,” the scoundrel complimented his worthy adversary, then mentioned that oh, by the way, it looked like Glenn’s grave had been defaced. “I hope,” he oozed as much as said, “it wasn’t that someone was angry.” Immediately rushing to her husband’s gravesite, Maggie was violently attacked by a hooded man. Thankfully, Hershel’s crying brought Enid and Alden out to help save Maggie from — no big shock there — Earl. Knowing full well that Gregory had put the grieving dad up to the treacherous task, “Margaret” made a beeline for her nemesis. “You can’t even murder someone right!” she marveled. As if to prove her point, he then tried to stab her — again, unsuccessfully!

‘DO YOU HAVE ANY FINAL WORDS?’ | The following day, as Carol put Jerry in charge of Ezekiel, she promised her boyfriend that she wasn’t running away from him by remaining at the Sanctuary. “I’ll be content to move at your speed, Lady Carol,” he responded, “though the waiting is such sweet sorrow.” Shortly thereafter, Rick, Michonne and Daryl arrived at the Hilltop. During a visit with Maggie, Rick expressed his desire for her to visit Alexandria — though he knew very well why she couldn’t. He then acknowledged that the Hilltop had given an awful lot during the rebuilding of the communities. “But I’m asking for more,” he added — food and supplies to feed the workers as they repaired the bridge. Maggie was OK with Hilltoppers working on the project if they wanted to but nixed the idea of handing over more supplies for nothing — the Saviors would have to do most of the work on the bridge and send over the fuel made from their dead corn.

Rick didn’t seem to have expected Maggie to draw such a hard line in the sand. But she was sticking by it. Though it was a bummer that the Sanctuary was struggling, she said, “they surrendered. We didn’t kill ’em. That’s it.” While Rick picked his jaw up off the floor, Maggie reminded him that, before the war, he’d told her that he’d soon be following her. “But you didn’t,” she continued, “’cause I wasn’t someone to follow. That changes now.” (Loving the tough new Maggie!) That night, the Hilltop’s leader ensured that all of the youngsters were tucked away, then told the gathered adults, “People need to understand that at the Hilltop, the punishment fits the crime.” As such, Gregory was going to be hanged! Lily-livered to the bitter end, he argued that she must be ashamed, killing him in the dead of night that way. “I’m not ashamed,” she replied matter-of-factly. And, though Michonne tried to stop the execution as some kids had wandered out, the villain was (finally) put to death.

So, what did you think of the Season 9 premiere? Grade it in the poll below, then hit the comments.