Crazy Ex-Girlfriend is about to get even crazier in its final season: Rebecca Bunch’s former flame Greg, played by Santino Fontana in the CW rom-com’s first two seasons, will return in Season 4… but he’ll now be played by Pitch Perfect star Skylar Astin. Huh? Yeah, exactly. 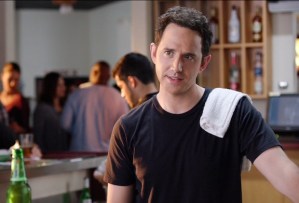 Bringing back Greg with a different actor playing him feels exactly like the kind of wonderfully weird plot twist Crazy Ex would throw at us before taking its final bow — but star Rachel Bloom says she and her co-creator Aline Brosh McKenna had always planned to revisit the Greg storyline. “We just spent so much time on that character,” Bloom tells TVLine. “It would be sloppy TV writing to not go back to it at all.” (Fontana exited the series midway through Season 2, with Greg leaving West Covina to go back to school.)

Developing a potential stage version of Crazy Ex-Girlfriend cemented the need to bring back Greg, Bloom adds: “How do you write this stage musical with this love interest who disappears the equivalent of halfway through Act One?” Plus, she hints that the upcoming fourth and final season (debuting next Friday, Oct. 12 at 9/8c) “is very much taking a lot of the themes from Season 1 full circle, so it was the plot and the structure that demanded he come back.”

So how different is this new Greg… aside from, you know, a totally new actor playing him? “Pretty different,” McKenna admits. Casting Astin to play Greg is a sly nod to the fact that Rebecca and Greg have both changed significantly since he left town, she explains: “He’s been in recovery for his addiction, and she’s been in recovery for her disorder. So they’ve both changed a lot.” 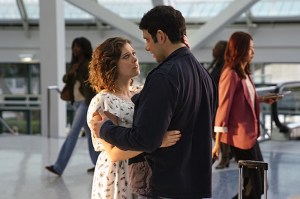 That might not be such a bad thing, though. As Bloom points out, Rebecca and Greg’s romance wasn’t exactly the stuff of fairy tales when he left. (In fact, to quote Greg’s swan song, “it was a s—t show.”) “When you watch Greg in Season 1, the dynamic between them was: They hated themselves, and each other,” Bloom says. “Which is cute and sweet, and it was sexy, and it was filled with chemistry. But ultimately, not super healthy. Both of them were going about it in a very unhealthy way, despite the kinship between them.”

We’ll see if their dynamic is any healthier when Astin joins the show as Greg midway through Season 4. (He’ll appear in multiple episodes, Bloom confirms.) His arrival, though, could make Rebecca’s blossoming romance with Nathaniel (Scott Michael Foster) a lot more complicated. Her lifelong obsession with Josh Chan might be over, but “when she least expects it,” Bloom teases, “love triangle-y romantic stuff comes back in a very big way.”