On this week’s episode of The Big Bang Theory, Leonard and Penny realize that something they frequently joke about is actually a serious detriment to their relationship. As even the occasional viewer can tell you, the longtime marrieds have nothing in common. Even worse, they have very different visions of what their future holds.

In “The Procreation Calculation,” Howard and Bernadette mention to Leonard and Penny that the house next door may soon be on the market and ask if they’re interested in checking it out. Leonard and Penny maintain that they’re happy in Apt. 4A, while Penny suggests if they ever moved, it’d be to a loft in Downtown L.A. Leonard, meanwhile, envisions moving somewhere with a backyard. Raj says they should have discussed this sorta thing while they were still dating (yeah, ‘ya think?), then mentions that he and prospective wife Anu filled out a questionnaire to determine their compatibility.

Leonard and Penny think the whole arrangement sounds ridiculous, but they wind up taking the questionnaire once they’re alone, the results of which show that they’re not compatible when it comes to religion (Leonard’s not religious, Penny… does yoga), family (Penny’s close with her loved ones, while Leonard prides himself on keeping his distance) and, most importantly, kids. When asked how she feels about children, Penny indicates that she may not be the mothering type. “They’re ok, I guess,” Penny says. “If I saw one, I wouldn’t throw a rock at it.” Leonard specifies that the question pertains to having kids; he thinks they’ll settle down and a start a family within the next five years, while Penny… seems less sure.

Penny later confides in Bernadette, telling her that she may not want to have kids. Bernadette implies that Penny doesn’t know what she wants, but Penny seems confident that she doesn’t need to have children to be fulfilled. Later that night, she comes home and asks Leonard how he’d feel if they didn’t start a family. Leonard quickly becomes overwhelmed and storms out of the apartment.

The following day, Leonard returns home from work to find Penny’s made him his favorite dinner: an In ‘N’ Out Burger, straight out of the wrapper. Leonard apologizes for freaking out, then tells Penny he can accept not having children. (Hmm… we’ll see about that.) They hug and make up, then Penny receives an angry phone call from her dad (recurring guest star Keith Carradine), who’s been informed that his daughter doesn’t intend on giving him grandchildren. At the end of the episode, Penny shows Leonard how much she appreciates him by renting him the Batmobile for a day. 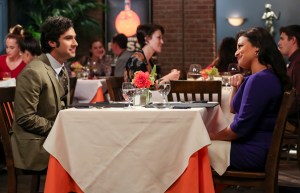 Raj, meanwhile, decides he’s ready to commit to an arranged marriage after a successful first date with Anu. Howard suggests that Raj is rushing into things, causing a temporary riff among best buds. The next day, Howard apologizes and tells his BFF that he has his full support… unless it’s a destination wedding in India.

On their second date, Raj has a change of heart. He tells Anu that he’s a hopeless romantic, and can’t agree to an arranged marriage. Anu manages to change his mind, though. She gets down on one knee to propose, and the grand romantic gesture turns Raj’s “no” into a “yes.”

Last but not least is Stuart, who complicates life in the Wolowitz household when he begins bringing Denise back home to have sex. Howard and Bernadette attempt to drown out Stuart’s sex mix with a playlist of their own, which causes an even bigger disturbance by waking up baby Michael in the other room.

What did you think of Episode 3 of The Big Bang Theory‘s final season? Hit the comments with your reactions!