Superstore Season 4 picks up months after Jonah and Amy’s hookup in the photo lab… and their subsequent suspension. The premiere begins at a diner, where Amy’s been working as a waitress ever since the suspension went into effect. It’s her last shift before returning to Cloud 9, and a poorly disguised Glenn wanders in to order a cup of coffee (with chocolate syrup, of course). We learn he’s been doing this ever since Amy started, leaving her a $20 tip every time. It’s his way of making up for the suspension.

The following day, Amy and Jonah return to work, just in time for the store’s annual Back to School sale. Amy fully expects fellow staffers to give her a hard time about hooking up with Jonah, but everyone is on their best behavior with the floor supervisor. Jonah, on the other hand, can’t escape what transpired. Marcus and Isaac idolize him for, and I quote, “shredding ass,” and give him the nickname “J-Bone the Conqueror,” because they’re the worst.

When Amy points out to Glenn that no one’s been bothering her about the incident, Glenn implies that no one should bring up something she’s obviously embarrassed about. Furthermore, he says, this sorta thing is less embarrassing for guys. Amy points out the inherent sexism, then gathers the staff to let everyone know that she has no reason to be embarrassed about what happened with Jonah. No one buys it, so Amy takes it a step further, telling everyone just how much she loves sex. “I’ve got sex on my mind, and my mind on my sex,” she says, ever so awkwardly.

New 14-year-old employee Noam takes Amy’s sex-positive remarks to mean it’s perfectly OK to approach her in the warehouse and ask if she wants to do it, loose condom in hand. When she immediately rejects him, he runs off crying and hides in a tent display in the middle of the store. This in turn prompts Glenn and Dina to hold an impromptu meeting on sexual harassment in the workplace, for which Glenn is not at all prepared. When Dina asks if Glenn needs the corporate video on sexual harassment, he tells her it’s no longer applicable. “The old videos don’t apply anymore,” he says. “We are living in a brave new, #MeToo, #TimesUp, This Is Us-kind of world!” The meeting immediately gets thrown off track when Jonah and Amy’s fellow Cloud 9’ers begins inquiring about their hookup, at which point Amy stands up and tells everyone they can ask whatever they want. Jonah reluctantly joins her, and the question-and-answer session extends well past closing. 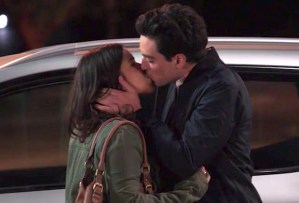 At the end of the night, Jonah approaches Amy in the parking lot and congratulates her on only sexually harassing one teenage employee on her first day back. He then asks whether she’d prefer Mexican or Italian for dinner. They agree on Mexican, then Jonah goes in for a kiss. “Hey, people are going to see us!” Amy exclaims. “Nobody’s around,” Jonah says, before kissing her. Yep, Jonah and Amy are officially an item! At least in secret, anyway.

Elsewhere in the episode, Jeff is trying to get back in Mateo’s good graces. He’s been making the five-hour drive from Chicago to St. Louis just to see him at the store, but Mateo is so over him. Jeff turns to Garrett and Cheyenne, who make clear that everyone hates him for what happened to Myrtle. He can’t bring her back, but promises to do the next best thing. Later that night, he returns to the store to let everyone know that he’s hired Myrtle to record a series of electronic greetings; she’ll now serve as Cloud 9’s new virtual greeter. No one’s impressed, and the holographic contraption craps out almost immediately.

What did you think of the Superstore premiere? And were you genuinely surprised by the Jonah/Amy reveal at the end? Weigh in via the following poll, then hit the comments with your reactions!