In Thursday’s Season 3 finale, Amy and Jonah had sex — but unbeknownst to them, the backroom romp was being broadcast to every Cloud 9 in the world.

We should explain: In the episode, Jonah and Amy rallied their fellow coworkers to come up with a plan to confront the CEO, who was visiting their store to take part in a town hall meeting being live-streamed at fellow Cloud 9 locations spanning the globe. The plan was for Jeff to hijack the Q&A portion of the event and ask about Myrtle, whose recent firing was the result of a widely accepted age discrimination policy. Fearing the company would halt its stream, Garrett rigged a second camera to go live if Cloud 9’s went dark… only it never did.  And so, it wasn’t until the town hall was over that the cameraman powered down, at which point Garrett’s secretly planted device was enabled and showed Jonah and Amy getting off to an extremely “fresh start.”

Below, series creator Justin Spitzer weighs in on the state of Amy and Jonah’s relationship, the decision to write in America Ferrera’s pregnancy and more.

TVLINE | Why was now the right time to bring Jonah and Amy together?
It’s not certain that they’re together. They have sex, and we may start next season with them together [or] deciding that they’ve made a mistake and jumped the gun a little bit. I think we have options.

TVLINE | Which isn’t to say that this wasn’t huge.
It’s definitely a giant step forward, you can’t argue with that. It just felt like… seeing them kiss again wouldn’t have been particularly interesting. This seemed like it was a little more shocking, and we spent so long slow-burning their relationship that we wanted [to take] a giant, reckless leap forward.

TVLINE | Was it always the plan for them to have sex by season’s end?
No… I mean, we have ideas in mind for where arcs on the show will go, but we generally haven’t thought things through much with [Jonah and Amy], because we like to challenge ourselves and keep things surprising. We didn’t make the decision that this would happen until very late in the season.

TVLINE | Of course, any potential relationship is complicated by the fact that Amy’s an expectant mom. Why did you decide to write America Ferrera’s pregnancy into the show?
We sort of went back and forth for a long time. We knew she was trying [to start a family] earlier on in the season, and I even briefly talked to her about whether Amy should be the [surrogate] for Glenn, but we didn’t know if she’d be pregnant yet… Then when she really did get pregnant, we talked again about what it would do for her character… and it came down to asking ourselves, “Do we want to make Amy’s life that complicated?” And we decided that, yes… this felt like a good complication. But it was definitely something we debated many, many times.

TVLINE | America will have given birth by the time production begins on Season 4. Will Amy still be pregnant next season, or can we expect some sort of time jump?
I wouldn’t be surprised if we do some sort of time jump — but if we do, I would be surprised if we jumped past the point where she has the baby. I certainly want to see Dina having [Glenn’s] baby, and they’re pretty close to each other. So I think it’s going to be fun to see both of them very visibly pregnant at the same time. Obviously, we’ll have to use [prosthetic] bellies for both.

TVLINE | Will Jonah’s ex-girlfriend Kelly (played by Kelly Stables) continue working at Cloud 9 next season?
We love the actress, and think the character is very funny. We’ll have to talk about this character and what her function [is] once she’s not dating Jonah. She might stick around. 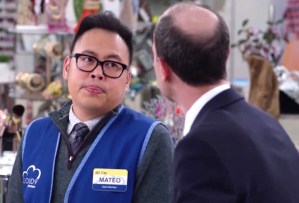 TVLINE | Jeff betrayed pretty much everyone — including boyfriend Mateo — when he accepted that corporate gig in Chicago. Is their relationship doomed?
It’s definitely not looking good at this point, [but] I won’t say it’s doomed forever. [Mateo] was definitely furious at him, and I wouldn’t be surprised if they have another breakup at the beginning of next season.

What did you think of the Superstore season finale? Grade it via the following poll, then react to the big Jonah/Amy development below.