The CW’s quietly compelling Canadian import Burden of Truth is going out with a legal punch in this Wednesday’s season finale (airing at 8/7c).

The series follows big-city corporate lawyer Joanna (Beauty and the Beast‘s Kristin Kreuk) and small-town legal eagle Billy (Rookie Blue‘s Peter Mooney) as they team up on behalf of a group of teenage girls — Billy’s niece included — who are experiencing seizures and tics following chemical poisoning in rural Millwood. As the case ramps up, with Joanna and Billy going up against her unscrupulous lawyer father in the courtroom, “the season finale, for me, is the bare-knuckle round,” Mooney previews. “This is where it gets into the real grit of it all… this is where the fight comes to a close.”

Luckily, Joanna and Billy might have an ace in the hole in the form of a love letter between her father and the town’s mayor. But upstanding good guy Billy might have some objections to using the note as ammunition. “It’s a bit tricky. Billy would, of course, rather win the case purely on its merits,” Mooney says. “And he’d rather fight this fight with all the evidence they have about the girls’ illness. But he also knows that they’re up against the ropes, and they have to pull out all the stops, if they have any hope of winning.” 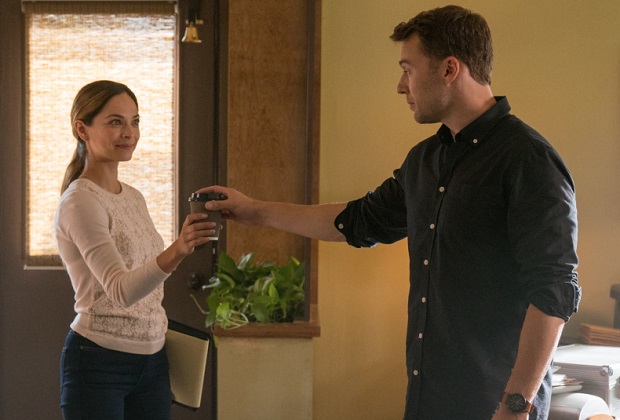 Regardless of what the lawyers decide to do with the letter, Mooney promises there will be closure to the Erin Brockovich-esque case, which has dominated the show’s 10-episode run. A “benefit of us taking a whole season to tell a story is we’re able to explore what a nuanced resolution looks like,” Mooney says. “On paper, there’s going to be a winner and a loser, but a case like this really has a cost and takes a toll on everyone involved.”

The medical investigation may have even curtailed high school acquaintances Billy and Joanna’s chance at a romance. “The case itself is kind of a high-wire act, and they both have so much skin in the game, personally, that the thought of allowing any other complications to come in is pretty scary for them both,” Mooney shares. But as seen by the way the pair locked eyes during the prom episode, “if they find themselves dancing, it’s hard to escape those feelings.”

Burden of Truth fans, stay tuned to TVLine for scoop on Season 2, which has already been ordered by CBC in Canada.