Over the course of just four episodes, American Horror Story: Apocalypse has gone from being a show about Earth’s last survivors to a show about the timeless struggle between witches and warlocks. That’s an impressive leap, even by AHS‘ standards.

Wednesday’s episode turned the clock back three years, when Outpost 3 was still an elite private school for boys — nay, warlocks. That’s where a young(er) Michael Langdon had his dark gifts nurtured by a group of men who believed he was the answer to an unsettling prophecy. (And aren’t they all?) According to legend, an “alpha” warlock with “power beyond comprehension” would someday pass the witches’ Seven Wonders trial, thereby dethroning the Supreme as the world’s most powerful supernatural entity.

The info-heavy episode also took us back to Miss Robichaux’s Academy, where the ladies of Coven were less than thrilled to be summoned by the warlocks for some nonsense story about a male Supreme. (“Men are simply not equal to women when it comes to magical ability.”) Of course, they began to doubt themselves when Michael set out to do the one thing Cordelia couldn’t: liberate poor Queenie’s restless soul from the Hotel Cortez. 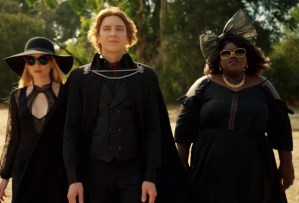 That’s right, friends — we’ve been so focused on the Coven and Murder House elements of this season, we didn’t even consider that we might also get some Hotel action. Despite Cordelia’s best efforts, it appeared that Queenie would be stuck with that mustachio’d lunatic James March for the rest of time, but all it took was one quick visit from Michael to liberate her from that “hell mouth.”

Speaking of hell, Michael’s next stop was Madison’s eternal prison, a Bed Bath & Beyond-esque store with depressing lighting and no personal massagers in stock. (As Queenie noted, “You’re a stone cold bitch and you’re exactly where you belong.” And she wasn’t wrong.) But because Michael’s master plan required both of Cordelia’s fallen students, he returned to the land of the living with Madison and Queenie by his side, a sight that quite literally swept Cordelia off her feet.

* As explained at the top of the hour, Coco, Mallory and Dinah are all witches who had their memories wiped for their “protection.” And even though Coco is allegedly the weakest of the bunch — according to Madison, at least — I’m weirdly excited to see what she’s capable of.

* Like many other viewers, I assumed (incorrectly) that Ms. Mead was modeled — at least in part — after Jessica Lange’s Murder House character Constance Langdon. But it turns out Ms. Mead was always herself, a Satan-worshipping single foster mother who made casual threats of poisoning over dinner.

Your thoughts on this week’s Apocalypse? Were you also taken aback by the unexpected Hotel aspect of the hour? Whatever’s on your mind, drop it in a comment below.