Jimmy and Kim are still scamming on Better Call Saul this week, but he also has a chance to get back on the legitimate side of the law. Will he take it?

The two of them pull off another con job to kick off Monday’s episode, with Kim hobbling into the city hall of Lubbock, Texas on crutches. She wants to check the already filed documents for Mesa Verde’s branch expansion against the ones she has — and we can tell Kim is lying once she talks about her eight-month-old son. Jimmy stumbles in, playing her dopey brother “Bill,” who was supposed to be watching the kid, and in the confusion, he leaves a bottle of formula to leak all over the filed documents. When Kim sees they’re ruined, she freaks out, and the nice lady behind the counter offers to swap in Kim’s documents, since they’re the same anyway. Kim thanks her profusely — and secretly swaps in another set of plans while the lady isn’t looking. (It’s her way of pushing through the bigger expansion Kevin asked for last week.) 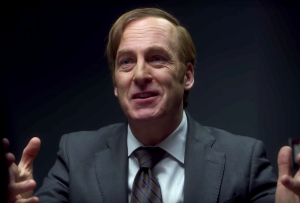 Running scams is fun and all, but Jimmy aims to go straight again, too, with a hearing to get his law license reinstated. He shows up bright and early, eager to prove to the three-person panel that he’s done all the right things. He seems to impress them at first, even rattling off a recent Supreme Court decision to show he’s keeping up on current case law. He’s taken aback, though, when one of the panelists asks him to describe “what the law means to you.” He talks about working hard to earn his law degree from the less-than-prestigious University of American Samoa — “I must’ve quit 10 or 12 times” — but says he’s so glad he kept pushing. Then when he’s asked to name the biggest influence on his career, he pointedly credits the University of American Samoa… not his late brother Chuck.

The panel tells Jimmy they’ll let him know their decision in a few days, but he waits outside while they deliberate — and when he ambushes a departing panel member to see which way they’re leaning, her face falls. Incensed, Jimmy tracks down the panel’s lead questioner and screams in his face: “What did I do wrong?” The guy admits that “it was a question of sincerity,” and encourages him to reapply next year. But a furious Jimmy can only hurl his briefcase at the wall in anger. He vents his frustrations to Kim on the roof of a parking garage, still confused about where exactly he went wrong. But when she asks what he said about Chuck, he says he didn’t even mention him: “Why would I?” 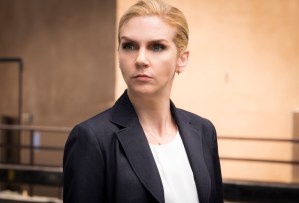 Kim apologizes, but Jimmy snaps at her, accusing her of not trusting him: “You look at me and see Slippin’ Jimmy.” (He also defends not mentioning his brother: “I don’t think about Chuck. I don’t miss Chuck.”) They bicker, in a way we haven’t seen all season. Jimmy is still hurt that Kim didn’t wait to start a new firm with him, and she’s still mad at him for embarrassing her at that office party. When Jimmy says she’s “kicking a man while he’s down,” Kim drops a bomb on him: “Jimmy, you are always down.” Back at home, Kim is nursing a beer alone when Jimmy starts packing up his stuff to move out. “I messed it all up,” he admits. But when she asks him if he still wants to be a lawyer, he says yes, and she offers an olive branch: “We can start with that.”

IT’S BEEN A BLAST | Mike’s Superlab project clears a big hurdle when they finally blast through that troublesome hunk of rock, with Tyrus rumbling a huge tractor trailer over a speed bump to mask the explosion. But while everyone else is celebrating, Werner isn’t happy: He confesses to Mike he misses his wife back in Germany, and asks if maybe he could sneak home for a few days and leave Kai in charge. Mike firmly says no — but during a routine security check soon after, he notices a burnt-out pixel on one of the surveillance cameras. The guards said it must’ve been a voltage spike, and by the time Mike checks Werner’s room, he’s gone. (At least he left a note.) Outside, Mike finds Werner’s laser measurement device, which the architect apparently used to short out the cameras. You don’t really want to make Mike Ehrmantraut mad, do you, Werner? 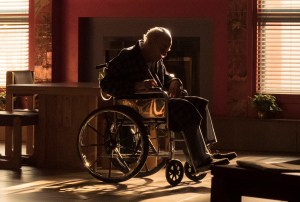 SAVED BY THE BELL | Lalo Salamanca just got here, but he’s already making quite an impression. First, he drops in on his wheelchair-bound uncle Hector at a nursing home, bringing him a souvenir from a house they torched: It’s a bell! Now we can hear that familiar “ding!” whenever Hector likes something. After chatting with Hector about “the Chilean,” Lalo pays Gus a visit at his Los Pollos Hermanos location, ostensibly to thank him for saving Hector’s life. But the vibe between them isn’t all that polite, with Lalo implying that Don Eladio wants to keep the two of them at each other’s throats. Lalo also wants Nacho to show him where the drug handoffs go down. Seems like he’s intent on filling the power vacuum left by Hector’s condition, doesn’t it?

* Next week is the Season 4 finale. Will we see Jimmy put out his lawyer shingle… as Saul Goodman?

* I hate to disagree with Mike’s police work there, but why not just offer to fly out Werner’s wife from Germany for a conjugal visit? Surely Gus would cover the airfare.

* Kind of heartbreaking to see Kim excitedly make a “World’s Greatest Lawyer Again” travel mug for Jimmy, along with buying him a shiny new legal briefcase, in anticipation of him getting reinstated.

* The Jimmy Buffett T-shirt that Jimmy wore as “Bill” for the opening scam was a nice touch — it’s shorthand for “guy you probably shouldn’t trust to watch your kid.”

* How many nephews does Hector Salamanca have, anyway?