Last time Adam Driver hosted Saturday Night Live, he was fresh off his breakout role as Star Wars: The Force Awakens‘ villainous Kylo Ren. Back for the Season 44 premiere, the onetime Girls star was fresh off his… supporting role in BlacKkKlansman, I guess?

The fact of the matter is, Driver really didn’t have anything to promote during his return visit to Studio 8H (the next Star Wars film isn’t due out until December 2019), but he was game for everything the writers threw at him, including a Career Day sketch which featured one of the most committed performances in recent memory.

Following a cold open that cast special guest star Matt Damon in the role of Supreme Court hopeful Brett Kavanaugh, the Season 44 premiere wasn’t especially topical, but provided just enough laughs to make it a slightly above-average affair. So, without further ado, my picks for the best, worst and somewhat in-between sketches… 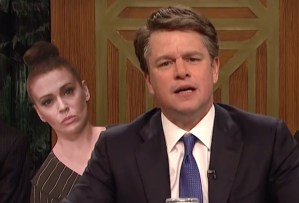 BEST: KAVANAUGH HEARING
On a scale from one to 10, Damon’s performance was definitely a 15. His recreation of the circuit court judge’s heated testimony won me over the second he gave a shout-out to high school drinking buddies PJ, Tobin and Squi, then blamed this whole mess on the likes of Kathy Griffin and “Mr. Ronan Sinatra.” The sketch itself was about five minutes too long, but Damon maintained an undeniable energy throughout that helped elevate this cold open above pretty much every tired, Alec Baldwin-led Trump opening from Season 43.

BEST: CAREER DAY
As alluded to in the introduction above, Driver truly committed to his role as aging oil baron Abraham H. Parnassus. His constant outbursts, coupled with Pete Davidson and Aidy Bryant’s inability to hold it together, took what could’ve been one of the night’s worst sketches and elevated it to one of the night’s very best.

BEST: WEEKEND UPDATE
Look, I’m not about to sit here and defend Colin Jost and Michael Che’s woeful turn at the Emmys, but the first Update back started relatively strong, with Jost smartly articulating some of the many troubling aspects of the Kavanaugh hearing. That was followed by Kate McKinnon’s always-enjoyable turn as Ruth Bader Ginsburg (this time professing her love for Riverdale‘s Cole Sprouse), Leslie Jones’ determination to get a Serena Williams bit on-air, and an amusing Pete Davidson segment about his engagement to Ariana Grande.

HONORABLE MENTION: COFFEE SHOP
This sequel of sorts to last season’s “Italian Restaurant” sketch was by no means great, but a decent enough showcase for Driver (who made me chuckle with his mispronunciations of words like “barista” and “biscotti”) and Cecily Strong (who really committed to that near-vomit bit when she was under the impression her coffee was made from hamburger meat).

HONORABLE MENTION: A NEW KYLE
I’m doubtful that any Kyle Mooney short will ever top the “Kyle and Leslie” trilogy, but I was definitely amused by his transformation into Pete Davidson. Casting Wendy Williams as the Ariana Grande to his Davidson was a totally random, yet inspired choice.

WORST: FORTNITE SQUAD
This was an unusually weak post-monologue sketch for the first episode back. Mikey Day got laughs the first time his character was seen running in place while up against a wall, but every joke that followed was just a lame variation on the same thing.

WORST: 80s PARTY
Much like the Fortnite sketch, this short relied on the same joke over and over, freeze-framing on various partygoers, Animal House-style, to reveal where they ended up. Seeing Strong and new repertory player Ego Nwodim called out as future Fox News and MSNBC anchors was slightly amusing, as was acknowledging Day’s character as a future victim of American Crime Story subject Andrew Cunanan.

WORST: NEO-CONFEDERATE MEETING
The 12:55 am sketch is usually among the most bizarre, but this one was just a flat-out dud. Driver’s Neo-Confederate raining on fellow racist Beck Bennett’s parade was neither funny nor particularly clever.

What were your favorite sketches this week? And what missed the mark? Watch all the highlights above, then grade the Season 44 premiere via the following poll.