In Insecure’s Season 3 finale Sunday, Issa wanted one thing and one thing only: a drama-free and happy birthday. But, considering the way she’d just been ghosted by Nathan and the way she’d been sparking anew with ex-boyfriend Lawrence, who in turn was sparking with church lady Deniese, was that really a possibility? Read on and find out. 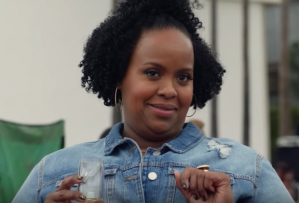 ‘HOW MANY BITCHES GONNA BE THERE?’ | As “Ghost-Like” began, Issa was trying valiantly to round up support for her block party. Not succeeding, mind you, but trying. Later, she admitted to Molly that, given how impossible the block party seemed, she’d begun sending out resumés again. She also advised Molly to get over her own work dilemma by sitting down with Taurean rather than letting their issues fester. From there, we cut to Lawrence having coffee with his dad, who was curious about his and Issa’s relationship status. “I just wanna meet a woman without any baggage,” Lawrence said. No such thing, Pop replied. Lawrence would have to work at making a happy ending for himself.

At the office, Molly learned that the firm had gotten a big case. What’s more, that case was going to her… and Taurean. Awkward. In other work news, Issa interviewed with the Beat Crew, whose leader Eli was interested enough to send her application upstairs immediately. Next thing we knew, it was Issa’s birthday. When Molly arrived to pick up her girl, she found Nathan strolling down the block with flowers. Uh-uh, no. “You’re not about to f— [her birthday] up,” Molly told him. So off he went, tail between his legs. Next, we tagged along with Molly, Issa and Kelli to the birthday girl’s surprise: an outdoor screening of The Last Dragon. Who should also be there but Lawrence, who was meeting Chad and another buddy. 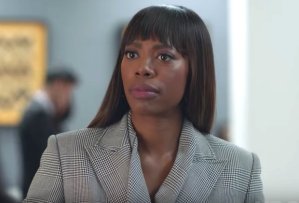 ‘IF I WANTED A KID, I’D’VE KEPT THE LAST ONE’ | Celebrating Issa’s big three-oh, Kelli revealed that she’d been made Tiffany’s baby’s godmother, and Molly revealed that Andrew was dead. Just to her, not actually dead-dead, she had to make clear for Kelli’s sake. Nearby, Lawrence was surprised to find out from Chad that he’d been forgiven by the ex he’d cheated on. How’d he pull that off? “I had to watch so much Project Runway,” he said, “I could sew an A-line skirt.” Later, in line at the concession stand, Molly ran into her ex, Jared. “Are you a judge yet?” he asked sweetly. At first, there seemed to be leftover chemistry. But she soon discovered that he was at the movie with a guy. “I knew it!” Molly told Issa. “My instincts [that he’s gay] were right the whole time.”

During the flick, Lawrence treated Issa to her favorite candy and sat by her side for a while. “The [block-party] event’s kind of on hold,” she admitted to him. “It just seemed like it wasn’t gonna work out.” After the movie, Jared came up to the ladies with the guy he was with — who turned out to be his brother — and their girlfriends. Oh, Molly. So much for your instincts! Issa approached the event organizer, whom she’d met at Tiffany’s baby shower, to marvel at her accomplishment. Afterwards, a newly inspired Issa told a skeptical Molly that she was gonna give the block party another chance. By and by, Molly confessed that Nathan had come by, so she’d turned him away. Why?!? Issa wanted to know. “You said you didn’t want no drama on your 30th,” Molly replied.

‘THAT’S NOT YOU… THAT’S NEVER BEEN YOU’ | In nanoseconds, the gal pals were on the verge of a fight over Molly’s recent negativity. But she had to be that way, the lawyer argued. The next day, Molly approached Taurean about their case, and he told her that he was no longer on it. When she appeared to be nervous about not having a co-lead, he advised her to, as she had when making their presentation without him, just tell the boss she got it. Over coffee with the organizer of movie night, Issa was delighted to see her block-party idea catching fire at last. Returning home, she found a bouquet of flowers on her doorstep. From Nathan? Presumably. But we didn’t get to read the card.

Shortly, Molly phoned Andrew, who was pretty over her BS. But she persevered, admitting that her last relationship had burned her more than she’d realized. So it looked like he might be giving her another chance. As the episode drew to a close, Issa’s new friend, movie-night-organizer lady, arrived for a date with — oh no! — Lawrence. Meanwhile, at Issa’s, Nathan apologized for ghosting her and said he hoped she liked the flowers. (OK, so they were from him.) Turned out, he’d gotten in a negative headspace and gone back to Houston for a while. “I wish I had a better explanation,” he said. Yeah, I wish he did, too. Issa wasn’t ready to forgive him. But at least she didn’t shut the door on their romance altogether. And it seemed important that “I’m back here now,” he promised. “For good.”

So, what did you think of the Season 3 finale? Grade it in the poll below, then hit the comments.