Last Man Standing is back, roughly 17 months after its initial cancellation at ABC — but is the Fox revival any good?

The Season 7 premiere, titled “Welcome Baxter,” begins with an extraordinarily meta cold open. The family awaits Eve’s return from the Air Force Academy, while Kyle sits on the couch, worried that his favorite TV show’s been cancelled.

Kyle: “I’m trying to DVR my favorite show, but it’s not on.”
Vanessa: “Oh, well maybe it got cancelled. You know, the TV business can be a heartless bastard.”
Kyle: “Cancelled? Why would they cancel a popular show that everybody loves?”
Mike: “Maybe they’re a bunch of idiots. Just try another channel.”
Vanessa: “Oh no, Mike. They don’t just take a show off one network and put it on a different network.”
Kyle: “Hey, there it is! You were right, Mr. B!” [Last Man Standing theme song plays in the background]
Mike: “Am I wrong, or is it, like, way better on this network?”
Vanessa: “Way better, way better. I’ll be damned, I’ve never heard of this happening before.”
Mike: “Well, it’s pretty rare, but the show must have a lot of loyal, kickass fans, huh?”

The episode then turns its attention to the continued fallout from the 2016 election. Cable news has taken over Ryan’s life, so Mike turns off the TV and encourages his son-in-law to do something that’ll put his mind at ease. But rather than take up protest yoga — whatever that is! — Ryan decides to move his family to Canada. 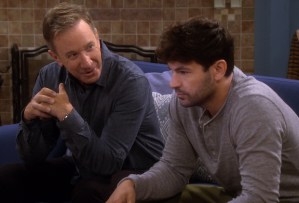 The all-grown-up Boyd (now played by Jet Jurgensmeyer) doesn’t want to move, and rebels by running away… to Outdoor Man. There, Mike finds him working on Project Birdhouse (aka their dirt bike restoration project). Boyd tells Grandpa that he just wanted a quiet place to think, away from all the politically charged fights taking place at school and at home. “It’s like everything is broken,” Boyd says.

Mike takes a moment to reflect, then uses the dirt bike to make a point. In doing so, the show itself argues that the current political climate won’t permanently divide the country.

“We saw this at a garage sale,” Mike says. “Remember what everybody said? ‘Why do you want that? It’s broken.'” And yet, “a lot of parts still work… We saw something worth saving, and we were both willing to do the work together to fix it. If you have that, you can put anything back together again.”

Mike and Boyd eventually return home. There, Mike presents Ryan with alternative to moving to Canada: an application for U.S. citizenship. The way he sees it, if Ryan can vote in future elections, he won’t feel so helpless about the current goings-on in the world.

* New Mandy (The Ranch‘s Molly McCook) first enters in the cold open. She comes downstairs and tells Vanessa, “Mom, this is really weird, but I got lost upstairs.” (Heh!) She’s upset with husband Kyle, who doesn’t notice the change in her appearance. By the end of the episode, he’s figured it out: “I’ve got it,” he exclaims. “You’re taller and blonde!”

* Eve, at one point, refers to the post-Trump era as a “new and improved America.” Like father, like daughter, I suppose.

What did you think of the Last Man Standing revival? Weigh in via the following polls, then flesh out your thoughts with a comment below.