We’ve asked it before, but new evidence is here, so we’re asking it again: Is Law & Order: SVU‘s Olivia Benson thinking about turning in her badge for good?

The two-hour Season 20 premiere, which aired Thursday, sure hints that the embattled lieutenant might be thinking she’s getting too old for this ish. 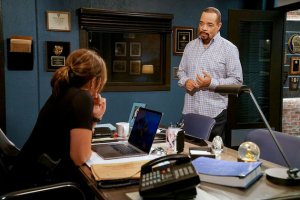 It all begins at the start of the episode, when Olivia gets winded while chasing a perp. She’s also slower than usual during a different pursuit later in the premiere, and Olivia’s inability to nab the suspect on foot inadvertently leads to a cyclist breaking her leg. In her office later, a guilt-wracked Benson tells Fin that she’s not sure how much longer she can be effective as a cop and a mom. He counters that she’s being too hard on herself and that “No one expects you to be Wonder Woman.” She looks at him sadly and answers, “I do.”

Granted, this isn’t the first time Benson has struggled with the work-life imbalance involved in running the New York Police Department’s Special Victims Unit and being Noah’s mom. But it is the first time we’ve seen physical manifestations of Benson’s overall weariness and/or inability to perform her job to the fullest. And given the slightly upsetting domestic note on which the premiere ends — Olivia tucks an angry Noah into bed and tells him she loves him, but he refuses to reciprocate — it’s not beyond the realm of possibility that Benson might decide that it’s time to hang it all up. 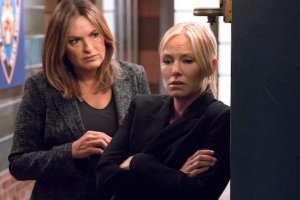 AS THE STORK FLIES | In other squad news, Rollins is pregnant again, and we’re lead to believe that the child’s father is Dr. Al, aka the guy she was seeing last season who had a predilection for the company of escorts. She meets him for lunch to tell him the news, but after she sees him flirting with a waitress, it’s unclear whether or not she divulges the pregnancy. She also almost tells Carisi during a tearful moment while they’re investigating, but in the end, she only shares her condition with Benson. She also confides in her boss that she’s considering terminating the pregnancy.

While Olivia says she’ll support Rollins in whatever she chooses, she pointedly adds that “Regret is an awful thing to live with,” tacitly confirming Amanda’s assumption that Benson had an abortion at some point in the past.

Also, Peter is drinking hard, engaging in ménage à trois and generally not dealing well with his grief over his sister’s death. But let’s get to the case at hand, shall we? 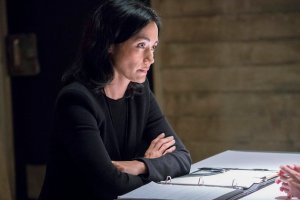 CHUNG CHUNG OF THE WEEK | When a high school alerts SVU that one of its male students has some suspicious bleeding, doctors later determine that the boy, who is named Sam, was raped. But Sam maintains his injuries are from an accident on a hunting trip with his father and brother the weekend before. For a while, Liv & Co. think the boy’s older brother was behind the attack. But after the boys’ mother admits that she witnessed her husband John (played by Nip/Tuck‘s Dylan Walsh) raping her younger son — as punishment for not being enough of a man to shoot a rabbit during the aforementioned hunting trip — Benson and Carisi arrest John, and the case goes to trial.

Here’s the problem: Sam is clearly upset, but he testifies that no one raped him and that he sustained the injuries during rough sex with a stranger. Stone can tell that Sam is afraid of his father and presses the kid on it while he’s on the stand, but to no avail. The boy won’t name his father as his rapist, and the jury finds John not guilty.

Then Sam brings his father’s rifle to school the next day and opens fire on his classmates, killing two of them and wounding five others.

Carisi finds the teen on a baseball field, and stops him from committing suicide with another gun of his dad’s. “I should’ve shot the rabbit,” the boy tells Carisi before he’s arrested. A new forensic psychiatrist named Lisa Abernathy interviews Sam in custody and tells the team that he grew up in a toxically masculine household that valued “being a man” above all else.

That gives Peter an idea: He’ll go after John for creating the environment that led Sam to do what he did at school, aka criminally negligent homicide. It’s not a slam dunk, but the jury eventually finds John guilty, and he’s taken into custody.

Now it’s your turn. Grade the premiere via the poll below, then hit the comments with your thoughts.